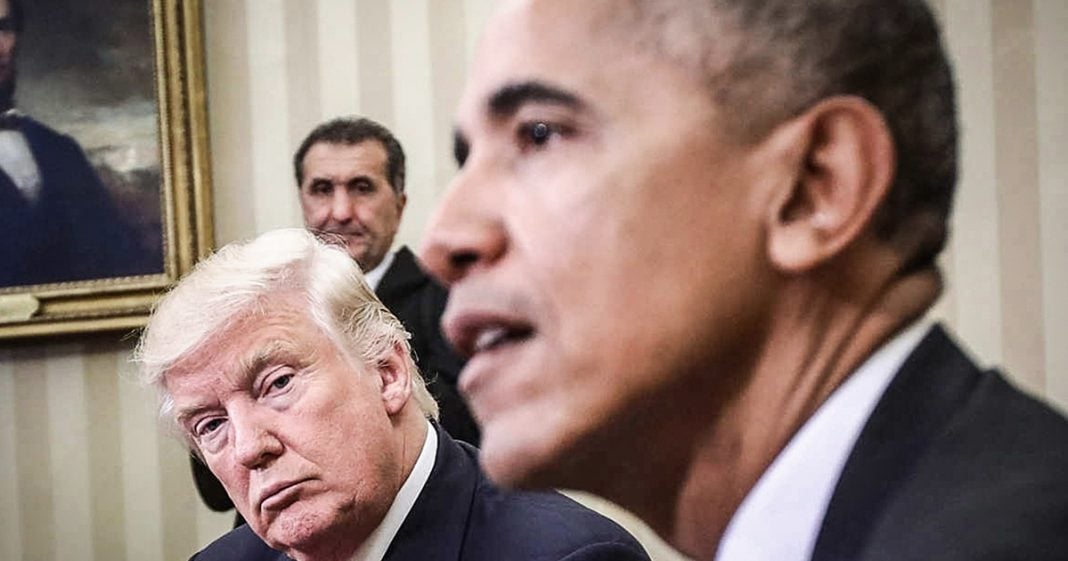 The Trump administration has finally been forced to concede that there is absolutely no evidence whatsoever that the Obama administration had Donald Trump’s “wires tapped” during the campaign. They can find no orders, no records, and no evidence of any kind to confirm that any of this happened, but that’s unlikely to stop Trump from spreading the lie that he’s been telling since March of 2017. Ring of Fire’s Farron Cousins discusses this.

In March of 2017, Donald Trump dropped a bombshell from his Twitter feed, when he said that Obama had his wires tapped at Trump Tower, during the 2016 presidential campaign. Now, anyone who wasn’t a diehard Donald Trump supporter immediately knew that this was not true. There was no evidence to back this up. Nobody in the intelligence community could find any record of this ever happening.

Well actually, late last week, the U.S. Department of Justice, trying to I guess bury the story, actually came out at the end of the day and said, “By the way, there’s absolutely no evidence whatsoever to back up Donald Trump’s claims that Obama had his wires tapped. We looked at it. We’ve examined that. We’ve investigated it. We spoke to James Comey. We spoke to everybody else involved at the time. None of them have any recollection or record or evidence or proof to back up anything that Donald Trump said about having his wires tapped.” That, again, is coming from Donald Trump’s Department of Justice. Nowhere in the records, nowhere in the court filings, which have to happen if you tap somebody’s wires, there is nothing. There is no evidence.

Now I’m sure, immediately, we’re going to see conservatives, once they understand that this story actually happened, they’re going to come out and they’re going to tell us that it was because Obama did it illegally. Of course, there wouldn’t be a paper trail. Of course, there’d be no witnesses or they would all deny that it happened, but if in fact it did happen, where are the recordings? Because why would you tap somebody’s wires and not record them or not transcribe them or not keep any records? There’s no point to do it, if you’re not going to do anything with that information.

There’s no evidence to back up what the President said. I mean, on any given day, there is no evidence to back up anything the President is saying, but that hasn’t stopped him from repeating these lies. All this story is going to do is get him even more pissed off at his own Department of Justice. We’ve seen him attack, Jeff Sessions on Twitter, in interviews, all kinds of things. This is going to be no different. He’s going to get mad at them for coming out and admitting that the President lied about this, because this was a big lie for Donald Trump. You know, one of the biggest ones to start his administration, March of 2017. He’d been in office a month and a half. Put this out there, got Republicans all into a frenzy. They wanted investigations. They hated Obama more than ever, and it all turns out it was based on a lie, a crazy lie from Donald Trump.

That’s kind of the underlying issue here, is Trump had no reason to lie about this. He had no reason to even say that. It wasn’t like it was a topic of conversation of, maybe this thing happened. “Oh, Trump, say something. What’s your opinion?” The guy just said it. He just woke up in the morning that day, made it up in his crazy little mind and tweeted it out.

That’s what happened, ladies and gentlemen, and that’s not my opinion. That’s pretty much what the DOJ told us last week. Trump made up this claim for no reason. If you still support this man I cannot recommend enough, please go seek out your nearest mental health professional, because much like the President, there’s gotta be something wrong if you can stand by this guy who lies to your face all day long and still think he’s best for this country.