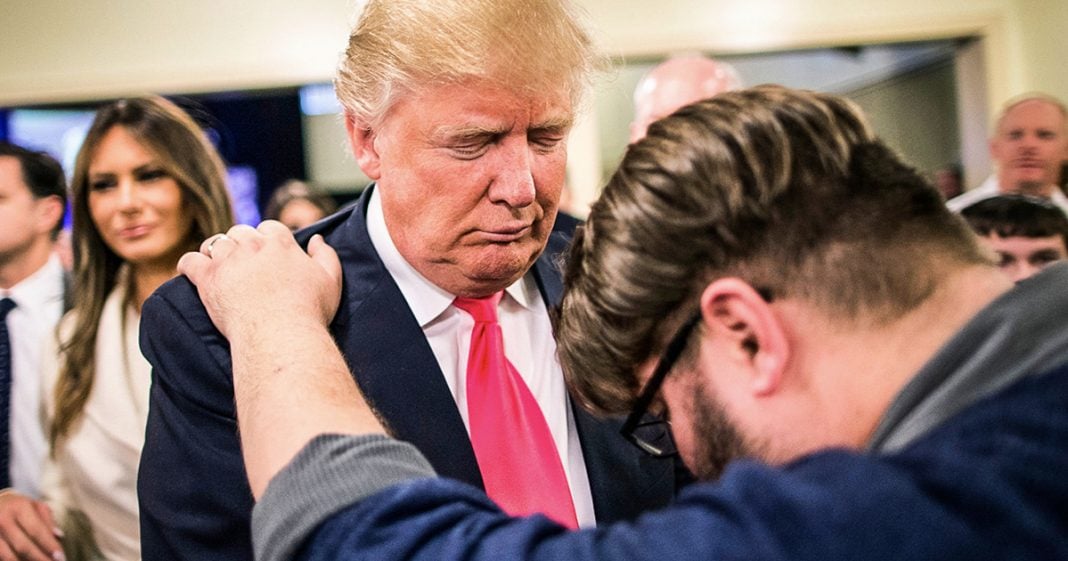 Christian author Rob Dalrymple did not mince words with his recent op-ed published in Patheos, where he says that the twisted logic and morals of pro-Trump evangelicals is exactly what the devil would want them to do. While it may not actually be the work of Satan, it has been interesting to see the so-called Moral Majority bend over backwards to excuse Trump’s behavior even though they’d be calling for crucifixion if a Democrat were to do half the things that Trump has done. Ring of Fire’s Farron Cousins discusses this.

Right-wing Evangelicals have really been twisting logic, they’ve been twisting morals and they’ve even been twisting what’s in the Bible in order to convince themselves that Donald Trump is a good guy that they need to throw their support behind. Well, Christian author Rob Dalrymple has had enough of this. Dalrymple recently posted an op-ed on Patheos where he described what is happening to American Evangelicals today and he actually believes that these people who think they’re doing God’s work might actually be doing the work of Satan.

Here’s a few, just a few of the quotes from this op-ed, let me read these. “I’m writing this because I believe that the Evangelical rights unapologetic support for Donald Trump as president is downright shameful and often extremely hypocritical, not because he’s a bad president, but because he’s exemplifying a seriously flawed character that in no way should be affirmed by the Christian community.” Hard to argue with that other than he says, “Not because he’s a bad president.” He’s a horrible president. Let’s be honest, unless you’re in the top 1% this guy has done absolutely nothing to help you in your life.

But yes, Evangelicals out there, people who say they live their lives by the Bible supporting a guy like Donald Trump, a guy that obviously lies all the time, and let’s not forget Christians, lying is breaking a commandment. Adulterer, also breaking a commandant. The list is endless. The insults that he hurls, the bullying that we see, the acceptance and praise that he gives to dictators and even Congress people here in the United States who beat up reporters. None of these are Christian values.

Dalrymple continues here, he says, “Nor has he shown any sign of repentance for groping women, demeaning foreigners and the less fortunate, mocking handicapped persons, belittling others et cetera.” Tragically the Evangelical church’s endorsement of this man’s many moral failings and character flaws has had a significant impact on the church’s witness in the world. This alone suggest that this is not the hand of God, but the hand of the enemy. Enemy of God obviously at that point being Satan.

But he’s absolutely right. The longer that these so called Christians continue to support Donald Trump by twisting their own morals into pretzels, the worse the church’s reputation becomes. Probably not gonna hit the lows that the Catholic church has with all of these sexual assaults that’s taken place there, but people around the world look at right-wing Evangelicals here in the United States almost as a cult and it’s getting worse. It’s hard for them to excuse that cult like image that they’re projecting when they’re willing to throw all of their own morals aside in order to support a guy like Donald Trump.