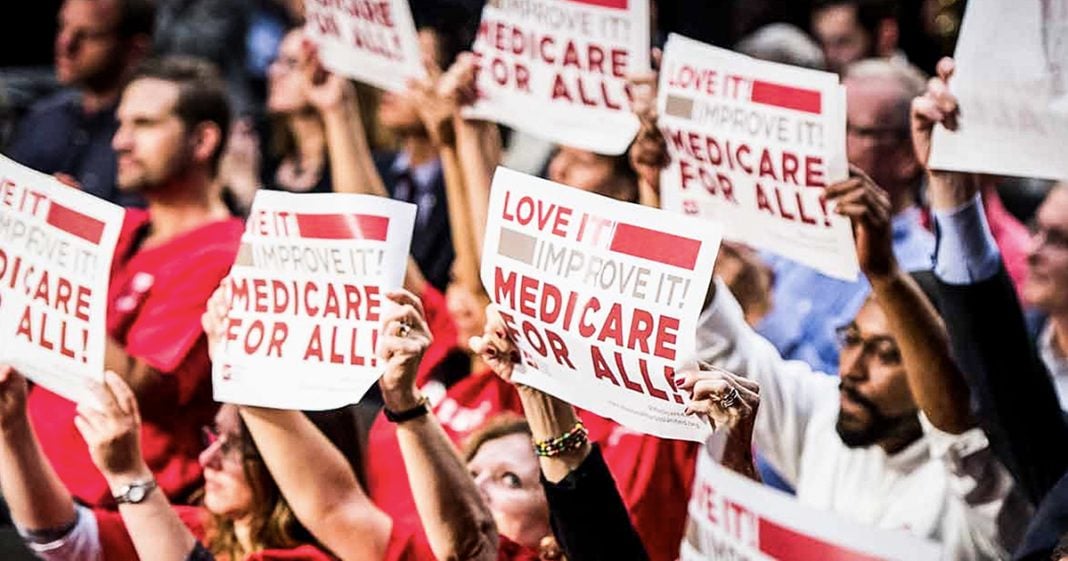 According to the latest round of polling, a majority of Republicans (52%) say that they support a “Medicare for All” policy here in the United States. This goes along with majorities of both Democrats and Independents, so the big question now is what are we waiting for? The public wants this to happen and Congress needs to make this a reality soon. At this point, the policy is an inevitability, so why waste any more time? Ring of Fire’s Farron Cousins discusses this.

So I guess the biggest question I have right now, other than why are we not doing this, is why isn’t every single Democratic candidate running for office right this second talking about Medicare for all? It is a winning issue 100%. You could get some Republican swing voters, you could get those Independent voters, and you sure as hell could sure up your support within the Democratic party. You could bring back senior citizens that abandoned the party once they hit their twilight years. Everything about Medicare for all is a winning political issue, and that doesn’t even begin to scratch the surface as to why it’s a good economic and healthcare issue for citizens in the United States.

Even if you don’t factor in all the savings that would happen from this, which what was it $2 trillion over the next 10 years we would save? How many lives we’d save, thousands upon thousands every year just due to the increase in healthcare coverage. People able to go to the doctor and get the treatments they need. Even if you don’t factor that in and you just look at it as strictly a political issue, is this going to get me more votes? The answer is yes. There is no reason why any sane member of the Democratic party or the Republican party at this point, shouldn’t be running on this issue.

And yet too few of them are. And I think we’re at virtually zero on the Republicans side. And we’re not much higher than that on the Democratic side either, to be honest. The people from all walks of life in the United States want a Medicare for all here in the United States, they want that option. They want the government funded healthcare, at least, like Medicare itself, as an option.

Because see, senior citizens don’t have to get Medicare. If they just want to go with private insurance they can do that. And Medicare for all would be the same thing. And I think that’s part of the problem, I think we would see numbers even higher than 52% on the Republican side if we actually stopped calling thing Medicare for all. Paul Ryan is already out there trying to frame the issue as they want to force government funded healthcare on you, you lose your plan automatically, and you’re stuck with this government plan. That is not what any of the Medicare for all plans say.

It is a public option, an option. And that’s what’s missing from the conversation. In fact it’s actually missing from a lot of the progressive conversations on the issue. We’re not forcing anyone onto Medicare. It’s providing that as an option for the people who do not have other options, or who want a better option than their employee sponsored insurance, or the private insurance they have to go out and buy. Or maybe they work for a small business that doesn’t have to supply it for them. It’s an option, a public option. The same kind of public option we almost had as part of the Affordable Care Act before the healthcare companies came in, rewrote pieces of the law and took that particular part out. The American public wants it. They want it back in there. And if they understood even more about what’s actually being proposed, I guarantee you those numbers on all sides would absolutely go through the roof.

But the bottom line is this. There is no reason why any politician in this country today should not be running on a Medicare for all platform. It is a winning issue and you have to be an idiot not to be running on that today.