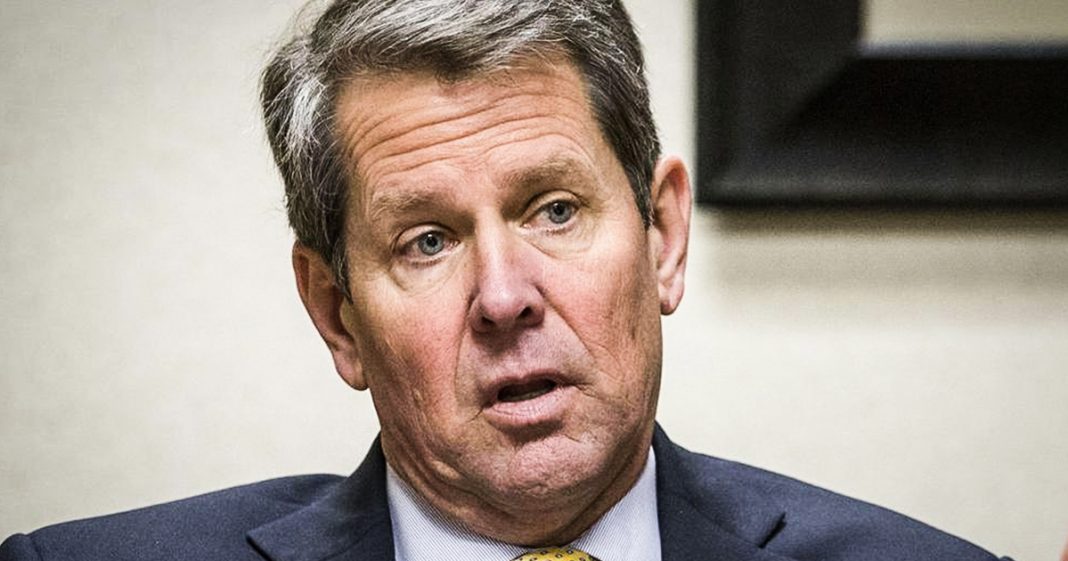 Brian Kemp, the Secretary of State for Georgia, has purged more than 340,000 voters this year, most of whom are black and lean Democratic. Kemp is also running for governor in the state against Stacey Abrams, a woman who could become the first African American female governor in America. Kemp’s actions are deplorable, but cheating is the only way he can win. Ring of Fire’s Farron Cousins discusses this.

He’s running against African American Stacey Abrams who, if she wins, would be the first African American female governor in the history of the United States. It is a very close race right now, neck and neck, and it’s all going to come out or come down basically to voter turnout. That’s why Brian Kemp right now, as Secretary of State, is engaging in this massive, possibly illegal, voter purge in the state. Almost 80% of the 340,000 people that have so far been purged from the rolls this year, 80% roughly, African American voters who all tend to lean Democratic in the state and, obviously, could be enough to push Stacey Abrams over the top and make her the next governor of the state of Georgia.

Right now, lawsuits have been filed against Kemp, Secretary of State, for these voter purges. Investigative journalist, Greg Palast, is actually leading that charge. He has been on top of this since day one. He’s actually reported that it’s not just the 340,000 that he’s purged this year. Over the last two years, we’ve seen more than half a million voters purged from the Georgia rolls. The reason that at least for the 340,000 is because Kemp is claiming that these people no longer live at the addresses that are listed on their voter registration. That’s not true for most of the voters. Yes, this is an illegal voter purge, but Kemp, like so many other Republicans across the country, believes that the only way he can win this election is by cheating. That is exactly what’s taking place here.

As the Secretary of State, he has the authority to purge people from the voting rolls. As a candidate for governor, he should have recused himself from his entire office’s activities in terms of voters, let someone else handle it, investigate it, look into it, otherwise you’re looking at a massive conflict of interest. Even if Kemp wins at this point, it’s obviously going to be seen as a massively flawed election and Kemp will be viewed as an illegitimate governor in the state of Georgia.

This is not unique to Georgia. This is actually happening all over the country right now. It just happens to be the most intense in the state of Georgia. It also happens to be the only state where the guy doing the voting purges also happens to have a stake in the particular election, which, going on in the state of Georgia right now, is nothing short of criminal. It is voter suppression. It is minority voter suppression because the Republicans are so desperate to hold on to that state that they’re willing to do anything, even if it’s illegal, to make sure that they win. That is exactly what is happening in Georgia today.