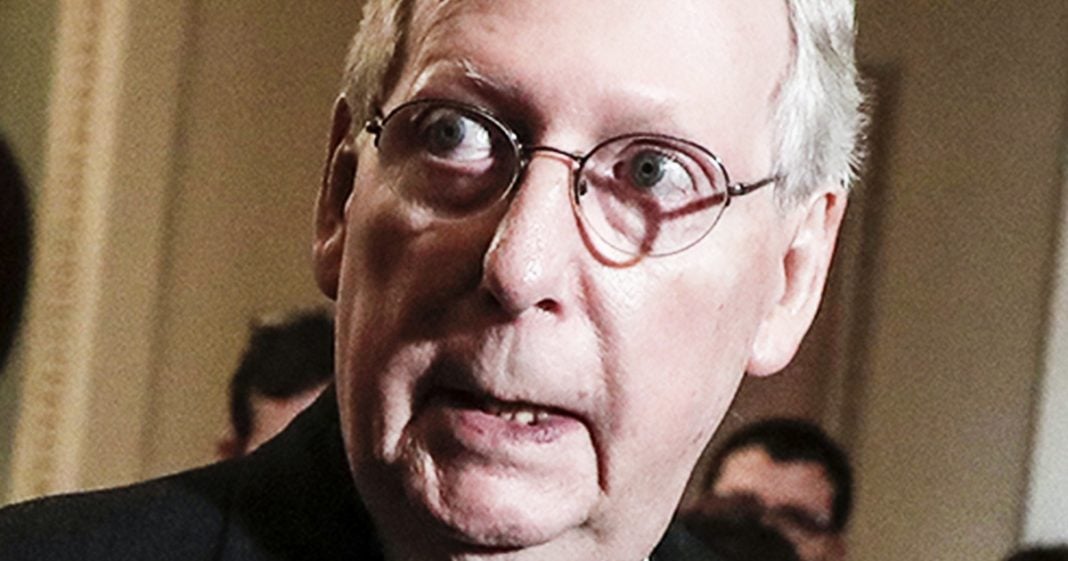 Republican Senate Majority Leader Mitch McConnell is the latest in a long line of Republicans who apparently need to start eating dinner at home more often, as the Senator and his wife were approached by angry constituents at a Kentucky diner recently. The angry voters were confronting Mitch about his plans to slash healthcare and Social Security, but McConnell didn’t seem to care. Ring of Fire’s Farron Cousins discusses this.

Well, you can go ahead and add Senate Republican Majority Leader Mitch McConnell to the growing list of Republicans who probably just need to eat a good meal at home every now and then. This past week, on Friday, Mitch McConnell and his wife were out at a diner in Kentucky, where Mitch McConnell is their senator, and they were shouted at by the patrons in that diner over McConnell’s plans to destroy healthcare and social security.

Now, immediately and obviously, this re-sparked the debate about civility and how we should be treating one another and is this or is this not appropriate behavior. The answer to that is hell yeah, this is appropriate behavior. You know if Mitch McConnell doesn’t want to have to deal with the consequences of his actions as a US Senator when he’s out there with his constituents, then he probably needs to find another line of work.

Because that’s what’s happening in this country right now, and it’s not just McConnell or Jeff Flake or even Nancy Pelosi, Joe Manchin. It’s happening to Democrats and Republicans. But these people, for far too long, these hugely wealthy people who’ve been serving in Congress for way, way, way too long, have become used to the fact that they never have to deal with the consequences of any of the actions that they take in the United States Congress.

Those days are over. They can’t go out in public anymore without somebody walking up to them and saying, “Hey, remember that horrible thing you said you wanted to do? Remember the horrible thing you did? Could you explain to us why that was a good idea?” And they don’t know what to do. They don’t know how to react. They’re terrified of their own constituents who are coming up to them wanting answers.

I mean that’s what this is about. People want answers. You’re trying to take away our social security. Could you tell us why? You want to destroy healthcare here in the United States. Do you mind giving us a little more information on that? What’s your motive behind this? Now, you may not always agree with the tactics of some of these people with the profanities or the shouting and getting in their faces, but as long as they are not violent, as long as they do not cause any physical harm to any of these elected officials, there is absolutely no reason why we should tell people to hold back.

It’s hard to be civil to these elected officials, especially people like Mitch McConnell when they are the ones doing all of the uncivil things in Congress. Trying to make it more difficult for the least among us here in the United States, the struggling class, to survive. Is that civil? Is that something we should just sit back and accept and think that that’s okay to do to these people? Or can we stand up, go up to these elected officials, Mitch McConnells, whoever they may be? Even the pundits like Tucker Carlson who says he can’t go out to eat anymore because people yell at him, can we not ask these people why they’re pushing these horrible policies? Can we not say, “Hey, I’m a voter in your district or in your state, and I’ve got a few questions for you”? Because after all, you, as my representative, as my senator, you actually work for me. That’s how it’s supposed to work.

Had that not happened, we wouldn’t have it today. That’s why what these people are doing by confronting these elected officials and members of the administration and members of the media, that’s why this is so effective. And more importantly, more importantly than just being effective, it’s absolutely necessary to remind our elected officials of what the American public actually wants.