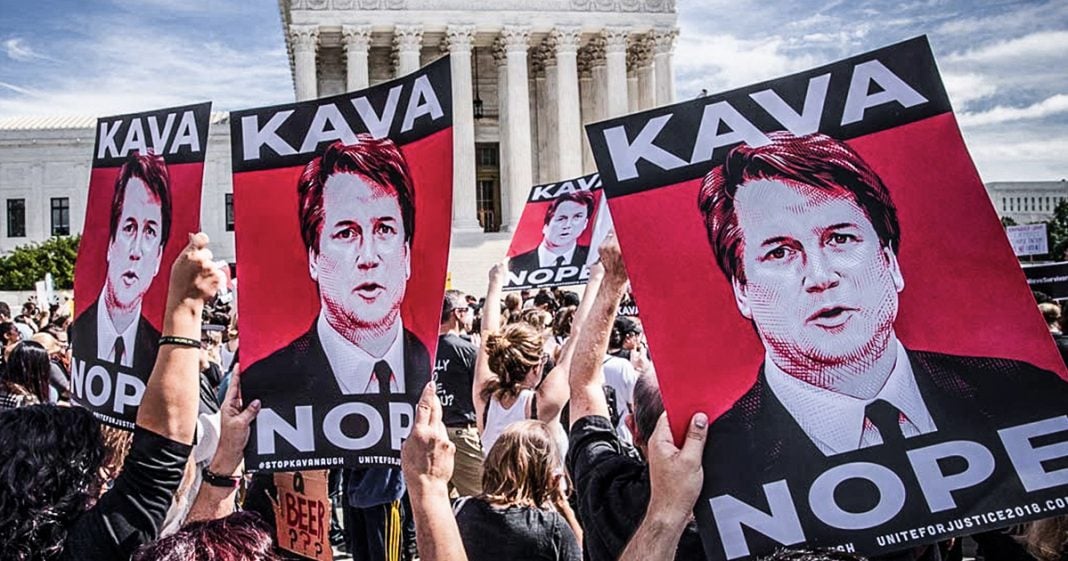 The midterms this year are going to be decided by female voters. Reports continuing flowing in about long-time Republican women deciding to abandon their Party over the confirmation of Brett Kavanaugh to the US Supreme Court, and these angry voters are the ones who are ultimately going to decide the midterms. If they revolt in large enough numbers against the GOP, that could spell the end of the Trump administration, as Ring of Fire’s Farron Cousins points out.

We’re now just a couple weeks away from the midterm elections. The latest round of polling show the Democrats hold about a ten point lead in generic ballots, so it’s pretty clear at this point … And it could change in the next two weeks. Anything is possible, but it’s kind of clear that Democrats … Gonna win at least back the House.

Here’s the thing though. These midterms are going to be decided by women here in the United States. Not just white women. They overwhelmingly voted for Donald Trump. But all women of all ages. Women are the ones who hold the keys to this year’s midterms, and whatever they decide to do is the direction this country is going to go in. And right now, it’s looking like more and more women, those in the Republican party, have decided to abandon ship because they can no longer support this backwards, discriminatory Republican party that we have in place today.

Recently in the L.A. Times, two different letters to the editor by prominent Republican women, one of whom actually was the Political Director for George H. W. Bush’s presidential campaign … They’ve said they can’t take it anymore. They’re done. They’ve had enough of the Republican party, and the tipping point for them was the confirmation of Brett Kavanaugh to the United States Supreme Court.

This is not going to end well for the Republican party. When you have more and more Republicans coming out each week, specifically female Republicans, coming out and saying “I can’t do this anymore. This isn’t what I signed up for. This isn’t the party I grew up with. This isn’t the party I supported and helped elect,” and they say, “I’m done. I’m walking away. I’m giving my vote to the Democrats, because at least they seem to understand that women should be equal to men.” The Republican party hasn’t gotten that memo, and as we’ve seen from their dismissal of the accusations against Brett Kavanaugh, the demonization of the women who accused him of this kind of behavior, and the sham of an investigation that the White House personally ham stringed from the FBI, they understand what’s going on.

The Republican party doesn’t care about women, and I know there have been plenty of stories on the other side, too, saying that there are women out there, Trump-supporting, Republican-loving women who say that these women were just seeking attention. They love Brett Kavanaugh, they love Trump, and they love the Republican party, and they are red until they’re dead basically is what they’re telling us.

But the reason those stories get so much attention and so much traction is because those are the outliers. The women out there who are saying “I fear for my sons being falsely accused of sexual assault,” that’s not the norm. Those are the people who don’t understand what’s going on, and luckily they are in a minority right now, but the Democrats need to understand that they cannot take these defecting women for granted. We have to offer them something as a party, as a platform. Something that they can latch onto and say, “You know what? I do agree with you on more than just you’re not a Republican.” That’s what the party has to offer.

It’s likely the Democrats are going to win in this year’s midterms. I mean, that’s kind of a given at this point. But if they don’t offer voters … Women, men, black, white, Hispanic, Muslim, gay, straight, whatever it is … If they don’t offer them something tangible, something material in their platform, then all the votes they get this year are going to be one-time outliers, and two years from now will be right back to Republicans controlling every branch of government.

Women will decide this year’s midterms, but it’s up to the Democratic party to decide whether or not they’re going to do anything to actually help these women.