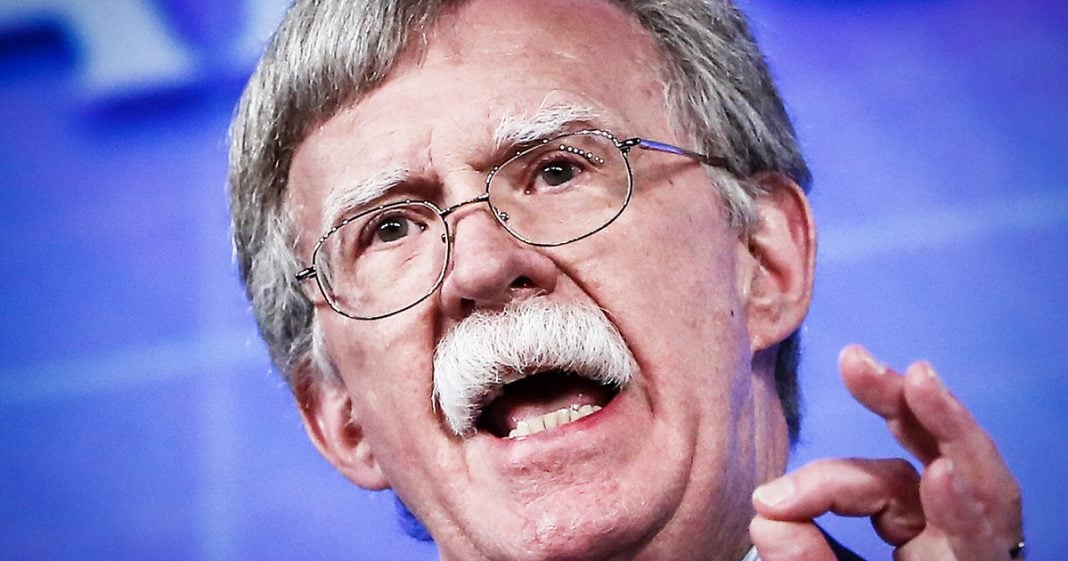 Donald Trump’s National Security Adviser John Bolton is blocking talks at the moment that could help extend a nuclear treaty between the US and Russia, and instead he wants the US to just pull out of these nuclear agreements. Not only is this move being derided as hasty and reckless, it would also send a signal to the rest of the world that the US is no longer keeping their word on agreements from the past. This is dangerous, and John Bolton is clearly calling the shots in this administration. Ring of Fire’s Farron Cousins discusses this.

Donald Trump’s national security advisor John Bolton has never met a country that he does not want the US to go to war with. You know, at first when this guy came into this administration earlier this year, was Iran. And it has been Iran for a long time. And, you know, let’s sell some weapons to Saudi Arabia to help them bomb some folks over in Yemen. It’s worked out pretty well for this administration. But now, Bolton has his eyes on a bigger target. Bolton seemingly wants to go to a war nuclear war with Russia.

And the reason I saw that is because right now John Bolton is trying to pull the United States out of our nuclear treaties with Russia. Now, these nuclear treaties were put in place in the mid 1980s as the Cold War was winding down. This was one of things that helped it wind down. Was that neither the United States nor Russia would create these long range nuclear weapons capable of reaching one another from where we are. According to John Bolton, Russia’s been violating that and they’ve got these medium range missiles now that if put in the right place could absolutely reach the United States. So, because of that we need to tear up these treaties, tear up these agreements, so that the United States can also start building these missiles.

That’s what this is about. This is John Bolton doing the bidding of defense contractors because they want to be building new missiles and new weapons to sell to the United States. But we can’t do it if we have those pesky little treaties in place. Now, there seems to be a little bit of disagreement in the state department and to whether or not Russia has actually even violated these treaties. But Russia has made it clear that they want to extend the treaties. That they want to stay a part of it. But John Bolton, according to those in the White House, has been stonewalling any talks between the United States and Russia and instead thinks we just need to pull out so we can start production on our own long to medium range nuclear missiles.

That’s not gonna end well for anyone on this planet. You know, if Russia is violating this, then yeah, we need to sit down, have some conversations, and figure out what the hell is going on. But without any hard evidence, without the state department stepping in because Bolton has shut them out of the conversations, without them saying, “Yes, they did this. We need to think about sanctions, we need to think about something.” But they haven’t said that. They haven’t done that. And Bolton’s not letting them figure out what actually happened. My guess is because Bolton, just like how he sold us the Iraq War, has absolutely no evidence to back up his claims. He just wants us to sell more missiles, build more missiles, buy more missiles so that we’re always ready for the allusive foe on the horizon that John Bolton apparently is the only one who can see.

Yeah know, I’d be really interested to know what happened to this man in his younger life that made him so afraid of every other country on the planet. But I’m willing to bet he’s got some pretty nasty skeletons kicking around in his noggin there. Things that maybe a very skilled psychiatrist or even a team of mental health experts, they might be able to get to the bottom of it. Unfortunately, we’ll never have the chance to do that. But right now, what John Bolton is doing, and he’s actually doing it against the wishes of the White House itself by the way, is trying to ramp us up and prepare us for nuclear war. Perhaps with Russia, perhaps with someone else.

But when you combine that with the instability and the eagerness to drop a nuke on another country embodied within Donald Trump. Again, that spells disaster for every living thing on this planet.