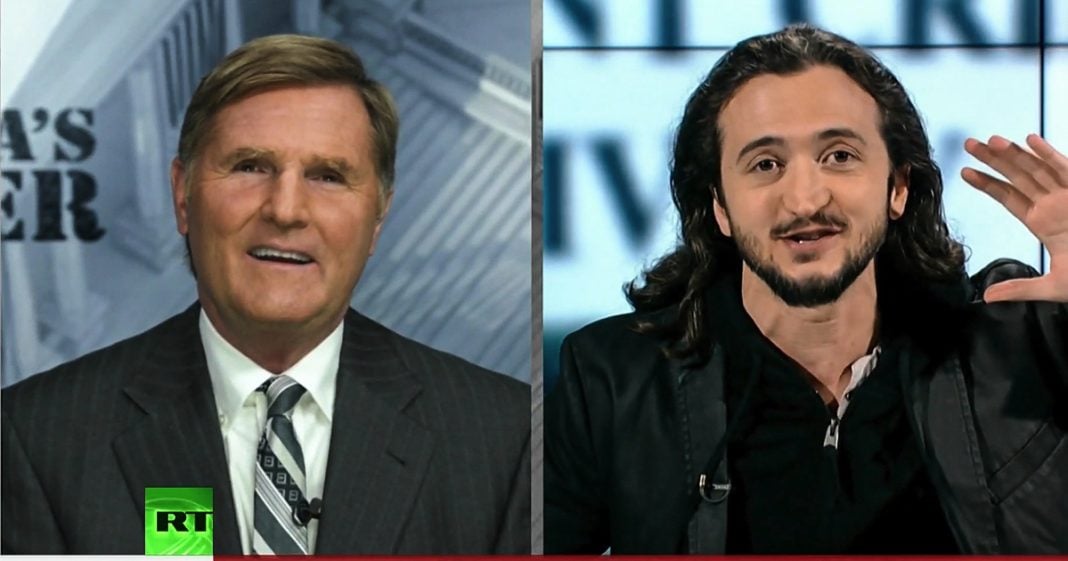 Mike Papantonio: We’re joined by Lee Camp who’s releasing his first standup comedy special in four years titled Very Patriotic Super Uncle Sam Comedy Special Not Allowed on American Television. Lee, welcome back to the show. You have this Facebook presence. What do you think of this latest purge? It’s sickening. We’ve become so politically correct that you almost can’t be funny anymore. I mean, it’s like we are a society of weenies, is the best way I’ve heard it described. What’s your take?

Lee Camp: Well, yeah. The idea that people don’t understand comedy or can’t handle it is pretty upsetting, but this latest Facebook purge with the 800 pages that were torn down overnight by Facebook and simultaneously many of the editors of those independent outlets were … their Twitter accounts were suspended at the same time, so this is a joint effort by some of the largest social platforms in the world to silence independent media. Sites like Anti-Media, Police the Police, Free Thought Project, these are very important outlets that have covered the stories that your corporate media will not dare get near. It’s just disgusting and really makes you wonder what’s the next step. If they’re willing to just rip down these sites overnight, then there’s no recourse, no one can get Facebook in front of them to tell them why they’re doing it, but it seems to clear that it has to do with their partnership with many in our corporate government. The Atlantic Counsel is working with Facebook and they’re an offshoot of NATO and have board members like Henry Kissinger and General Petraeus, so I think we know where this is coming from, it’s really a crushing of descent.

Mike Papantonio: Yeah, we’re being dumbed down to a bunch of autochthones. I don’t know if you’ve seen this cartoon out there, Lee, but it nails it exactly. There’s this ocean of heads, they’re drawings of heads that look exactly alike and the notion is this is the new progressive in America, that’s become so sterile in the way that they interact from the standpoint of politics. We must think alike. There can’t be anything that’s even a variation of that and that’s what Facebook has really jumped into here.

Mike Papantonio: In your new stand up comedy special, you talk about the corporate takeover of our criminal justice system. Tell me about that.

Lee Camp: Well yeah I talk about how we’re, in a lot of ways, living in an inverted moral universe when it comes to our justice system. The facts that laws are being passed that forbid people from feeding the homeless. Laws are being passed against basically being homeless. Camping is now illegal, right? But it’s not legal for our military to camp in Iraq and Germany and Djibouti and 183 countries around the world, that camping’s fine. Or, you know, a corporation can destroy our futures with their oil or as you know well, Monsanto’s chemicals can destroy our futures with that, but it’s somehow illegal for a activist to try and stand up against that, to protest, to turn off an oil pipeline for two hours, those crate cases are going through the courts right now with those climate activists. It really is an inverted moral universe.

Mike Papantonio: Well you’re releasing this special, Lee, on your own site. It’s leecampcomedyspecial.com. Why aren’t you putting it out on one of the platforms that usually has comedy specials, Netflix, HBO? You’re material is as good as anything out there or better. What’s going on with you releasing this on your platform?

Lee Camp: Well, thank you. That’s very kind of you to say. It’s the same reason that you and I aren’t on CNN at this very minute. The stuff that I talk about and the stuff you talk about in your show is not allowed on the mainstream outlets and so the main areas that usually have comedy specials are not going to carry the type of things I want to talk about. The ending the military industrial complex and the wars around the world ending our prison industrial complex that is truly a crime against humanity. Ending the stranglehold of big pharma, and you do such an effective job of fighting those things in the court system, but that is the type of topics that are not allowed on our mainstream airways.

Mike Papantonio: Well, it’s an interesting thing. Before McCain … interesting to … if you want to read a real book about John McCain, read The Real McCain. That really tells you the story about who the man was before we created this myth about what an incredible person he was. But what McCain did before his death was added to this idea of censorship. He didn’t want … well, he didn’t want RT on the air in the United States. He didn’t want some of the other foreign companies that come to the United States and actually produce news stories, so he put in the defense bill that people like Comcast could decide just to take us off the air if they chose; and why, because there is a dumbing down of what Americans are able to hear. There’s a dumbing down of what we’re permitted to say. That’s why MSNBC and CNN and all the major networks, if it doesn’t involve hate talk about Trump or maybe what Kim Kardashian wore to the last Emmy’s, it doesn’t sound like news anymore.

Mike Papantonio: Look, we’re almost at the mid-term elections. Do you talk about our election system in our comedy special?

Lee Camp: Yeah. I cover the fact that it is ridiculous that we vote on black box machines that are owned by corporations. Its proprietary code and this is the type of election rigging that is not really discussed. At least not nearly enough on your corporate media. I mean imagine … Mike, imagine if the last five minutes of the Superbowl, they just turned off all the cameras and finished the game in the dark and then told the American people, hey the Patriots won the Superbowl. We would lose our minds. The streets would be on fire. Yet instead, it’s just our presidency and every election that is done in the dark and we’re supposed to be fine with it? I mean if it were a little league game you’d see refs’ heads on spikes.

Mike Papantonio: Lee, I gotta tell everybody this. I follow everything you do. This is a comedy special that you really shouldn’t miss. Take the time, find it, it’s something you’re really gonna like. And you outta follow Lee Camp, just all the time on his show. It’s the kind of comedy that you won’t hear on typical late night comedy shows. Lee, thank you for joining me, okay?