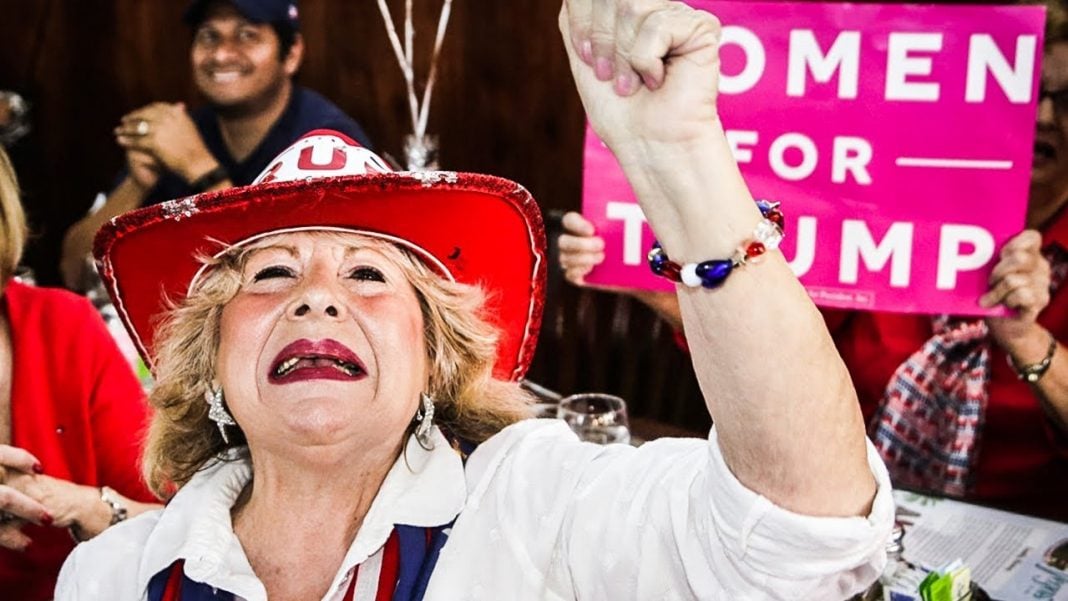 Emma Vigeland from The Young Turks recently attended a Donald Trump rally where she spoke to several women and asked them what they thought about the #MeToo movement with regards to Brett Kavanaugh. The responses were shocking. The women who support the president apparently believe that there is an epidemic of men being falsely accused of assault and then sent to prison for a crime they never committed, and they also believe that WOMEN are to blame when assault takes place. Ring of Fire’s Farron Cousins discusses this.

Last week at Donald Trump’s little rally in Erie, Pennsylvania, a TYT reporter, Emma Vigeland, actually went there to speak to some of the women at the rally who support Donald Trump to get their opinions and see what their thoughts were about Supreme Court Justice Brett Kavanaugh and the entire Me Too movement with regards to the allegations against Kavanaugh.

What she found was absolutely disturbing, more disturbing than you probably would have thought, because these women who support Donald Trump, and of course, obviously the men, they don’t seem to care. More importantly, they don’t seem to believe the women. They’re actually more concerned about the boys, the men, than they are the women, because they honestly believe, according to what they told the TYT reporter there, that men are the real victims here. “There’s too many men languishing in prison right now,” they said, under these false accusations of sexual assault. It’s all part of the hashtag Him Too movement that conservatives now seem to have started, because they’re concerned that their sons are going to be falsely accused of sexual assault and that it’s going to ruin their lives.

First and foremost, we have no evidence whatsoever that says that Brett Kavanaugh did not do these things he was accused of doing. Secondly, it doesn’t seem like it ruined his life, does it? I mean, the guy’s sitting on the Supreme Court now with a lifetime appointment. Please explain to me how that man’s life is ruined. It’s not. More importantly, there was no real investigation done into those accusations to find out if he had in fact ever sexually assaulted anyone.

But it gets worse. The women at the rally actually went on to say … here it is. This is just absolutely disgusting. This is what one of the women said. She said, “I’ve said it for a long time. Women should button their blouse, cross their legs, and quit acting like they want something. Then they won’t get it. It’s ridiculous,” so once again blaming the victim here that if you wear a low-cut blouse or maybe you’ve got a on a short skirt, then obviously you can’t blame the guy that rapes you, right?

Yeah, that’s not how it works. A woman’s body is off limits unless she says, “Yes, let us engage in some kind of activity together.” That’s what Republicans don’t seem to get. They don’t seem to get that idea of consent. Somebody could be walking naked down the road. That doesn’t give you the right to do whatever you want to to their body. Republicans need to understand that, but they never will, because it didn’t begin with Brett Kavanaugh, and it sure as hell isn’t going to end with Brett Kavanaugh.

Fox News has spent the last 20 years telling us that anybody who gets raped, anybody who’s a victim of sexual assault, well, what were they wearing at the time? How much have they had to drink? See, it’s probably her fault too. That is embedded into the DNA of conservatives in this country. They are never going to give the benefit of the doubt to the women. If it turns out she actually was sexually assaulted, they’re going to find a way to twist logic enough to somehow blame her for what happened.