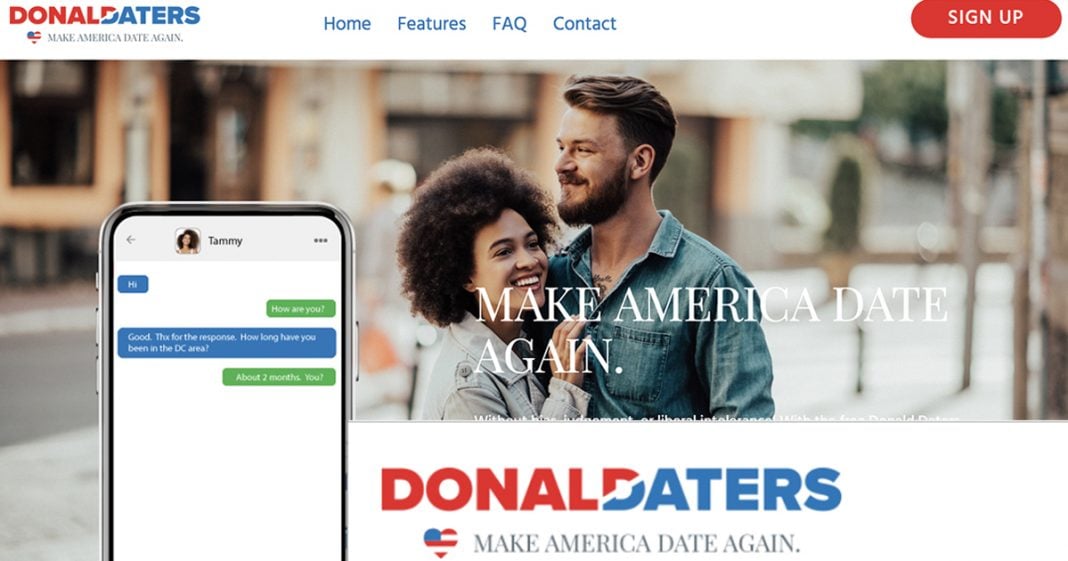 A dating app called DonaldDaters set itself up as a place where Trump supporters can meet one another and find love. But what they found was an app filled with glitches that allowed all of the data for the registered users to be leaked to the public, including names, addresses, and other personal information. This is about what we’d expect from a company founded by a former staffer of Marco Rubio, as Ring of Fire’s Farron Cousins explains.

If you were one of the 1,600 people earlier this week who downloaded the app Donald Daters on release date, I have some bad news for you. Other than the fact that, obviously, you’re a close-minded person who’s probably never going to find love, the bad news is that Donald Daters, which was an app for IOS and Android for like-minded Donald Trump supporters to meet, find love and live happily ever after; the day that it launched earlier this week they accidentally leaked all of their users’ data to anyone who knows how to access that kind of thing.

In fact according to Tech Crunch, multiple different groups were able to get in there and access all of the private data of all 1,600 people who had already signed up on the Donald Daters app. Literally, upon launch, this thing leaked all the data for these lonely Donald Trump supporters out there looking for love. And this next half of the story helps explain why this thing was such a complete failure. You see, Donald Daters was actually founded by former Marco Rubio campaign aide Emily Moreno.

Marco Rubio, much like Donald Trump himself, everything the guy touches turns to crap. And that apparently also happened with Emily Moreno who left the Rubio campaign to go start this dating app for Donald Trump supporters, because she claims it’s so hard out there for Trump supporters to date, to find somebody willing to date them. So we wanted to set this up so that everybody that supports Trump could find a like-minded soulmate.

Now hear me out on this. Maybe, maybe if you weren’t supporting a racist who locks little children in cages and acting like everything with that is totally fine; maybe if you didn’t support the biggest bully to ever occupy the White House; who still, being one of the most grotesque-looking human beings in the country, still finds it okay to make fun of other people’s appearances, even as President of the United States; maybe if you didn’t support those things, it wouldn’t be so hard to find a date.

I mean look, in my younger days, I dated conservative women. And yes we had political disagreements, but it didn’t end the relationships. You can still find somebody who you disagree with on politics and have a happy and healthy relationship. But what’s happened now is that these Donald Trump supporters have become a cult.

And they’re only happy cohorting with other cult members, because they’re the only other ones who will accept them. This isn’t about political differences. It’s not about policy differences. It’s about those of us who live in reality and those, like those on Donald Daters, who want to continue living in this fantasy alternative reality, where only their opinions and their feelings matter.