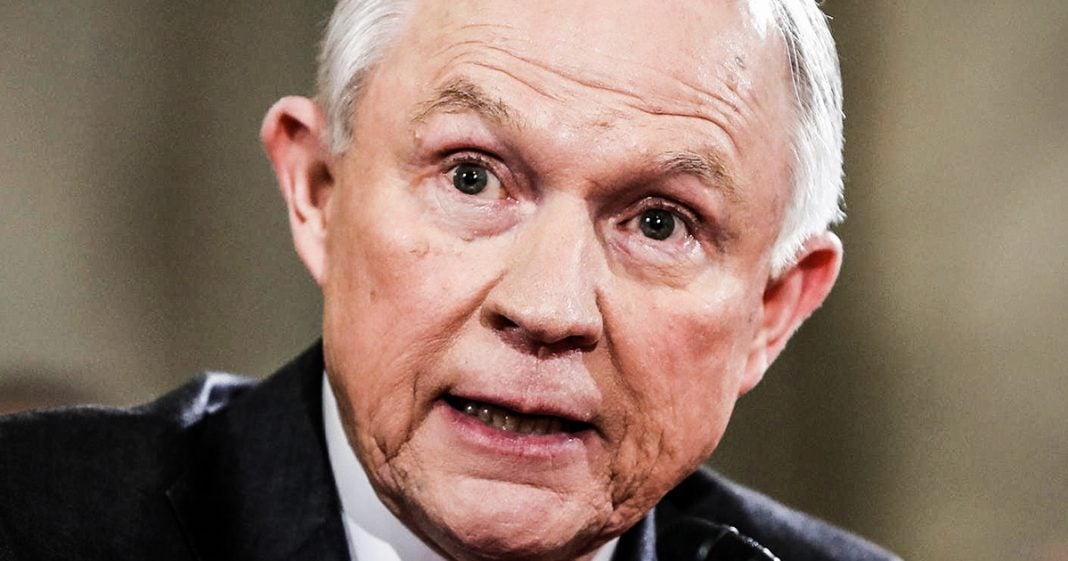 Jeff Sessions thinks he still has a chance to get on Donald Trump’s good side, so he’s made several public attacks on sitting judges that have ruled against the Trump administration in recent months. These attacks undermine the independence of the federal judiciary and fly in the face of our separation of powers. Sessions and Trump believe they are above the law, and these judges are the only ones keeping them from acting on those beliefs, as Ring of Fire’s Farron Cousins explains.

It’s no secret that Donald Trump is not a fan of Jeff Sessions. I mean, we’ve heard in recent weeks, even this week, Donald Trump asking, “Where’s Jeff Sessions?” when he’s got an issue that he wants Sessions to go prosecute for political reasons or whatever. Nonetheless, Jeff Sessions never answers. He never responds. He never tries to say, “I’m here. What do you need me to do, sir? I’ll do it gladly.” Instead, what Jeff Sessions is doing is trying to fly under the radar, making it look like he has got Trump’s back from day one.

This week, on Monday of this week actually, a little presentation for The Heritage Foundation, those group of horrible human beings, Jeff Sessions goes up there, gives his little speech, where he begins attacking sitting judges in the United States because, get this, they had the audacity to rule against the Trump Administration. What set Jeff Sessions off initially was that a judge ruled, actually upheld a ruling from three lower courts, that Commerce Secretary Wilbur Ross would in fact have to be deposed in the ongoing investigation as to why he added that citizenship question to the US Census.

Well, that pissed Jeff Sessions off. Nothing pisses Jeff Sessions off more than the thought of immigrants being treated like human beings, so he went after that judge. Then he kind of kept going and kept going after all kinds of other judges, like the one who struck down the transgender troop ban, the one who struck down the Muslim ban, the one down there in Texas trying to fight for the rights of these immigrants coming into the country. Jeff Sessions is out there attacking the independent judiciary just so Donald Trump will like him again. He is attacking only the judges who have ruled against this administration, and he’s telling those morons at The Heritage Foundation that it’s because they’re acting as judicial activists, thinking they can change the laws, and that their job is to sit back in this hugely partisan time and reevaluate what was going on in the chambers of Congress so that they can figure out what is right and what is wrong. In Jeff Sessions’ mind, that’s wrong, even though that’s literally the job of these judges, to figure out what the hell is going on, and what’s legal, and what’s not.

But the reason Sessions is doing this is because he can’t afford to stay on Donald Trump’s bad side for too much longer. He knows that his days as attorney general of the United States are probably numbered. If Democrats end up taking back the Senate, his job is probably toast anyway, so he wants to do what he can to try to save face with Donald Trump just in case Trump thinks about keeping him on for a little bit longer. But the real issue here is the attack on the judiciary. When you have a high-powered person, I mean, technically, the most high-powered lawyer/judge in the United States, Attorney General Jeff Sessions, attacking the independence of judges in the country, that tells you everything you need to know about where we’re headed as a country. That is fascism. We’re headed for a full-blown fascist dictatorship, and Jeff Sessions by trying to get back on Trump’s good side, has become one of the president’s biggest enablers by attacking the opinions of independent judges in the United States.