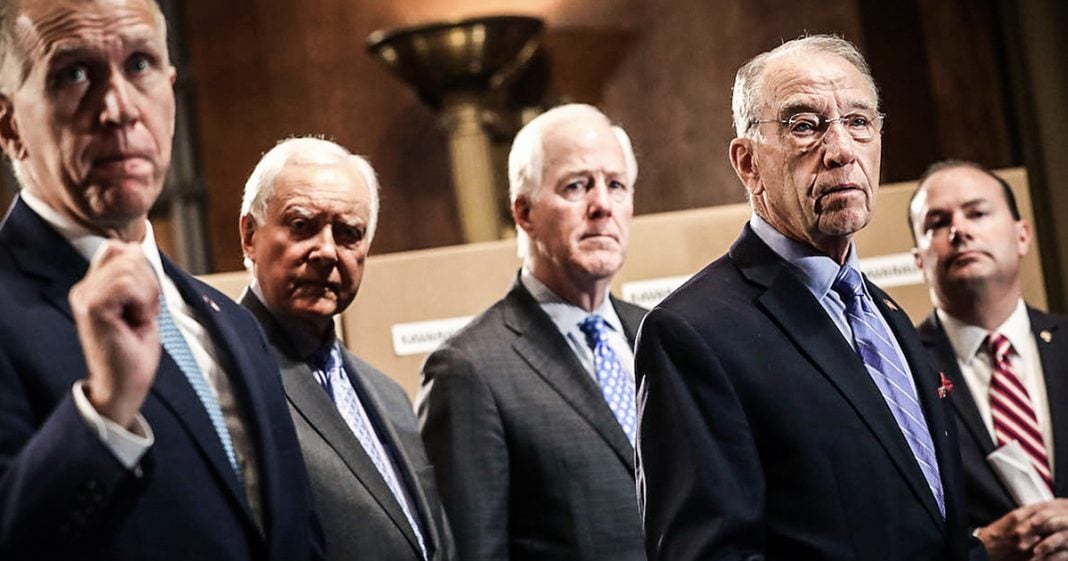 Republicans know that they are facing a massive round of losses in the midterms, and with cash apparently drying up for many of their candidates, they’re growing more and more angry that Donald Trump won’t share any of his $47 million campaign war chest with them. They believe that an infusion of cash from the President’s campaign fund could save “a seat or two”, but that isn’t enough to sway the President to give away his money – its like they’ve never met the guy. Ring of Fire’s Farron Cousins discusses this.

Republicans are mad right now because they don’t have enough money to fully fund all of the candidates running for election and reelection this year. As we’ve talked about in recent weeks, Republicans have actually had to pull their funding from some candidates who they believe, at this point, are lost causes and instead, redirect that money to areas where they believe it will be most helpful. But that’s not actually why they’re mad. They’re mad that not only do they not have enough money, but Donald Trump is sitting on a campaign war chest of $47 million and he’s not sharing any of it with those desperate Republican candidates. This move by the President, holding on to his $47 million that he has in his Presidential campaign fund, is infuriating Republican leaders who believe that that money, at least some of it, could be given to these candidates increasing the chances that Republicans could keep or even flip one or two seats somewhere in this country.

Now, what strikes me as odd about this story is that it’s almost as if Republicans have never met Donald Trump. Now, personally I’ve never met him but I know that if I went up to him and even asked for a dollar, he wouldn’t give it to me, let alone a party asking for millions of dollars to help candidates who are likely going to lose. I don’t think that Donald Trump would ever give you a penny out of his personal campaign fund. That’s the kind of human being that Donald Trump is. And what’s really ironic about it, is the fact that Donald Trump should be giving money to these Republicans, because if he loses the House, and certainly if he loses the Senate, good chance he may not make it out of his first term. But, instead, he loves money more than he loves the office of the Presidency and he is going to hedge his bets believing that nobody’s ever going to impeach him and that he’s going to cruise to victory in 2020 as well.

But there’s another reason why Donald Trump may not want to let go of any of his campaign money and that is because, as recent reports have told us, he’s actually having to use some of that reelection money to pay for his legal fees and, based on everything we know about the ongoing investigations, all of the new investigations into his family and their business practices, Donald Trump is probably going to need every dime of that money for all of his future upcoming legal fees, not to mention whatever is going to happen after the final report from Robert Mueller is finally released.

But even if he didn’t have that, even if he didn’t have any legal issues to pay, even if Republicans were really super nice in asking, I still believe there is no way in hell Donald Trump would ever part ways with his money if he wasn’t guaranteed to get at least that and more back in return and that’s something that Republicans, with as bad a shape as they are right now, they certainly can not guarantee him that.