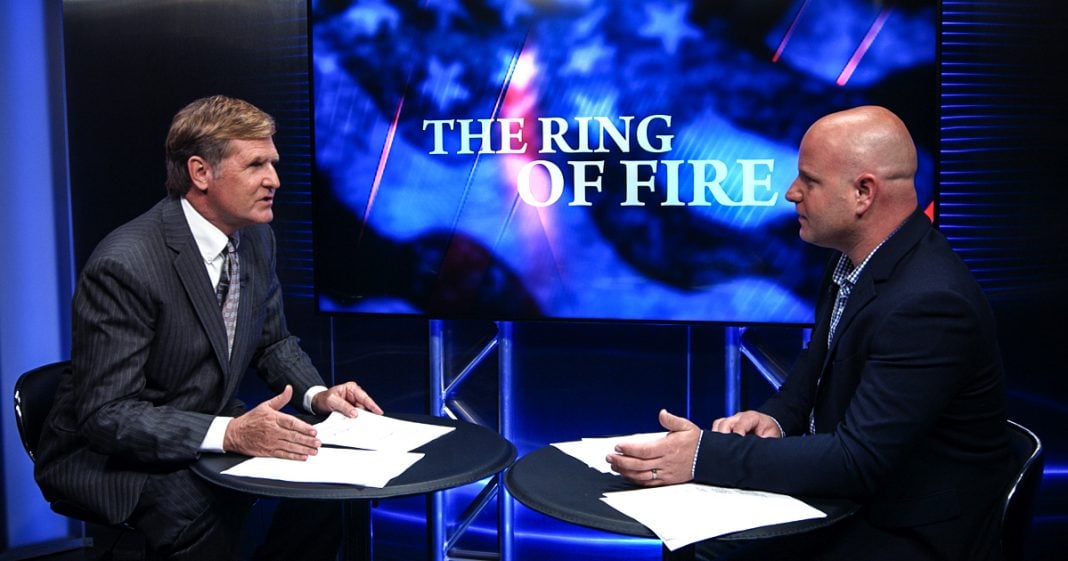 A major heart medication has been recalled because batches of the drugs had been contaminated with cancer-causing chemicals. Ring of Fire’s Mike Papantonio and Farron Cousins discuss this issue.

Click here to learn more about medications that contain Valsartan.

Mike Papantonio: A major heart medication has been recalled because batches of the drugs had been contaminated with cancer-causing chemicals. Now, can’t make that up. This, drug that people are … This is an entire class of drugs. The problem is, we know exactly where the contamination is coming from. It’s being contaminated with toxins from jet fuel. Take it from there.

Farron Cousins: This is such an odd story here. Valsartan is this class. It’s used in blood thinners and heart medications. It’s manufactured or final manufactured, I guess you would call it. Part of the manufacturing process is done over in China. While they’re doing that, somehow this chemical called NDMA, it has a very long scientific name, hard to pronounce.

Farron Cousins: Right, it is. This thing will absolutely give you liver cancer, this chemical does.

Mike Papantonio: In very small doses. What’s interesting about the chemical, this is what everybody can’t miss, is what we call a dose response. The dose response is very, very small. This is a critical point.

Farron Cousins: Right, and so they go through this manufacturing process in China. It gets contaminated with this jet fuel NDMA, cancer-causing chemical, shipped not just here to the US, all over the world. That’s any valsartan medication made by A-S Medication Solutions, which is also labeled as Solco Healthcare, Bryant Ranch Prepack, HJ Harkins Company, Northern Pharmaceuticals, and the biggest one is Teva Pharmaceutical Industries. They made a lot of this also labeled as Actavis and Major Pharmaceuticals. Any one of those that contains valsartan has been recalled for containing this cancer causing-chemical.

Mike Papantonio: Here’s the problem though, here’s where it really gets ugly. A company understands what’s happened here. They understand that they’ve put millions of people at risk. And so a person that … If you don’t see this on this story for example, you probably won’t even know about it because corporate media won’t tell stories like this.

The idea of being able to turn on the nightly news and have corporate media say, “Hey look, you might want to know the heart medicine you’re taking, the blood pressure medicine that you’re taking has been contaminated with a drug, with a chemical, a toxic chemical that is so toxic that the dose response that you get in very, very low doses can be projected and can develop cancerous problems in a time period that is actually faster than a normal progression of cancer.” Because it goes to the liver and the liver is so susceptible to cancer.

That’s the unique thing about this. Sometimes you hear about a contaminant, you hear about a toxin that’s a contaminant and it causes cancer and usually it’s a very latent process. It takes a while for it to develop. Here, this NDMA works a little differently. It works right on the liver. The liver is very susceptible to the cancer in this toxin. If you know somebody taking any of the drugs, read the list again, I think it’s important.

Farron Cousins: Oh yeah, let me get that here. It’s important to point out, these are heart medications and people unfortunately cannot just stop immediately taking them. They have to go visit their doctor and they need to do that. If you think you are on one of these medications, you need to do that immediately.

Mike Papantonio: Let’s just post it. We’ll post it on the show because I want everybody to see this. But, here’s what’s really important about it. Every time you hear a drug that’s been a recall or it’s got a problem; it’s causing death, it’s causing disease, the industry always comes out and says to the FDA, “You got to tell people that they can’t just stop taking it suddenly as if there are no other kinds of alternatives.”

There are alternatives to every drug out there. Very unusual where there’s not an alternative. This is a class of drugs that treats blood pressure, it treats heart. There are many classes of drugs that do that. So yes, you want to get an alternative, but the idea of, “Oh my God, I got to be so afraid because I got to keep taking this stuff.” Understand, these people want to continue selling this drug even though they’ve pulled it from the market. The inventory that’s left out in the market is massive.

Farron Cousins: Right, and my point is that it’s not that they have to keep taking the contaminated drug, it’s that if you’re on heart medication, you have to remain on heart medication. The consequences of skipping it can be deadly. You’ve got to get to your doctor as soon as possible to get a better prescription for a drug that’s not going to oh by the way, give you liver cancer in addition to your heart problems.

Mike Papantonio: And another oh by the way moment, they’ve known about this for a very long time. They’ve sat on it for a very long time. These companies could’ve sent out their doctor letters, they could’ve done a withdrawal. They could’ve got in the newspaper and said, “You need to know about this.” They didn’t do it because every day the drug is on the market, they’re making more money.

What we always see them do, this delay in getting the message to the person, “Don’t take this anymore. It’s been withdrawn.” They understand their inventory out there is massive. As we sit here and talk about it, people are still using this drug. They’re not in a big hurry.

Farron Cousins: Well, here’s the thing to, you know who else wasn’t in a big hurry? It was our own FDA because 22 other countries had already pulled valsartan containing medications off the shelves before our FDA said, “All right, I guess we’ll do a recall. Everybody else did it, we’ll finally do it.”

Mike Papantonio: Like it was a yawn moment. The death toll in Flint, Michigan can be much as 10 times higher than originally reported and the situation is just as bad today as it was a few years ago. Got a couple of minutes. This story is an agonizing story for those folks in Flint, Michigan.

Farron Cousins: It really is because what we’re finding out now, these deaths that were talking about, this actually isn’t the lead. This water the, same lead-contaminated water is also contaminated with Legionella bacteria and that is absolutely one of the most deadly bacterias in the US that you can get inside your body. We’re looking at at least, I think about 116 people dead from this whereas the official death toll that the city gave is was 12.

Farron Cousins: Look, the people in Flint, Michigan are suffering everyday just like the people in Puerto Rico. But, now it’s okay, well if the Legionella doesn’t kill you, you’re still going to have a horribly deficient life because we poisoned you and your kids with lead and you’re screwed either way.

Mike Papantonio: Sorry, nobody is responsible.