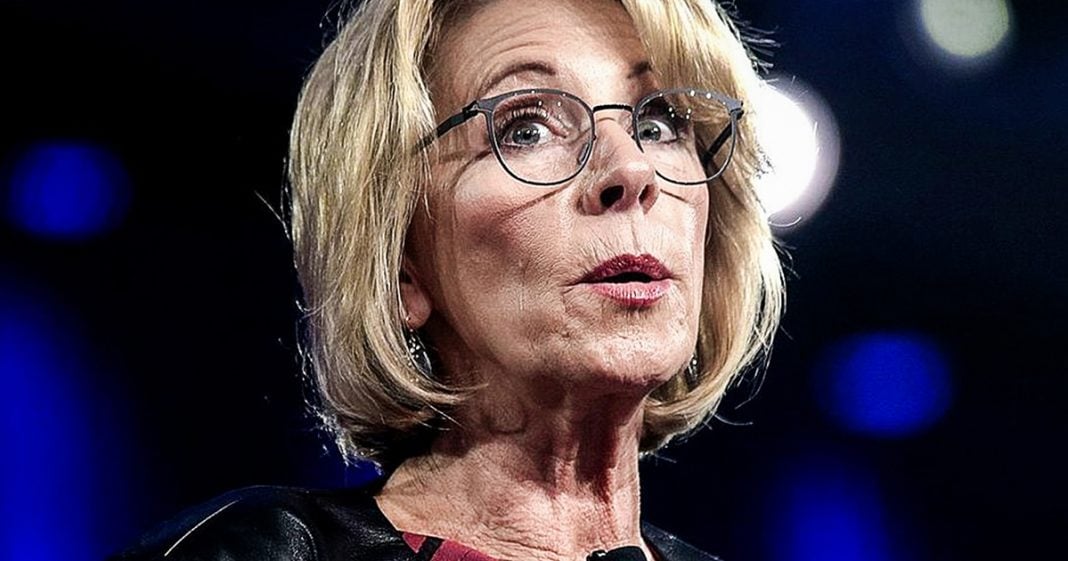 Billionaire Secretary of Education Betsy DeVos just took another major legal loss this week when a district judge ruled that she could no longer delay the implementation of student loan protections that were crafted during the Obama administration. This is just the latest in a long line of legal defeats suffered by DeVos who apparently views her position as one to protect private for-profit colleges and bankers rather than protecting college students. Ring of Fire’s Farron Cousins discusses this.

You know, it seems like we’ve had really nothing but bad news to talk about for several weeks, so here’s something positive that happened in the United States this week. US District Judge Randolph Moss actually slapped down an effort by Betsy DeVos, Secretary of Education, the billionaire Secretary of Education. Let’s not leave that part out, because that’s important. She was trying, basically, to undo Obama-era rules and delay their implementation because they would’ve allowed students who got swindled by for-profit colleges to have their student loans forgiven and it would’ve allowed them to avoid arbitration, and instead, taken their case directly to trial. Betsy DeVos didn’t want that to happen. She thought if you borrowed money from a big bank in order to go to a fraudulent college that you didn’t know was fraudulent, you were being scammed, she still thought you had an obligation to pay back that money, even though the degree you got was completely worthless. She also thought that if you wanted to sue them, you needed to go sit in arbitration in front of a friendly arbiter panel for the for-profit institution, where you would literally get nothing back because consumers lose almost 90% of the time in arbitration.

That’s what Betsy DeVos was trying to do. Obama administration, to their credit, took the issue of student loan debt and for-profit college scammers seriously, and they attempted to do something about it. And they did do something about it. It’s just that those rules had not been put into place yet, and Betsy DeVos was fighting tooth and nail to prevent them from ever going into place.

Betsy DeVos’s loyalties are to the for-profit college agencies, those companies, and the big banks. It’s not to students. She has not done a single thing, in almost two years on the job, to make the lives of students better, to make the jobs of teachers better, or to make education better. Every single thing that this woman was done since becoming the Secretary of Education, has been to the benefit of the corporations and banks, and to the detriment of students and teachers and any educational institute here in the United States, except of course, again, for those that pull in a profit.

Luckily we’ve got people out there like District Judge Randolph Moss, who understood what was happening, understood that it was unconstitutional, and slapped her back down so that maybe she understands that the position she agreed to take is about protecting students and not about protecting her own financial interests.