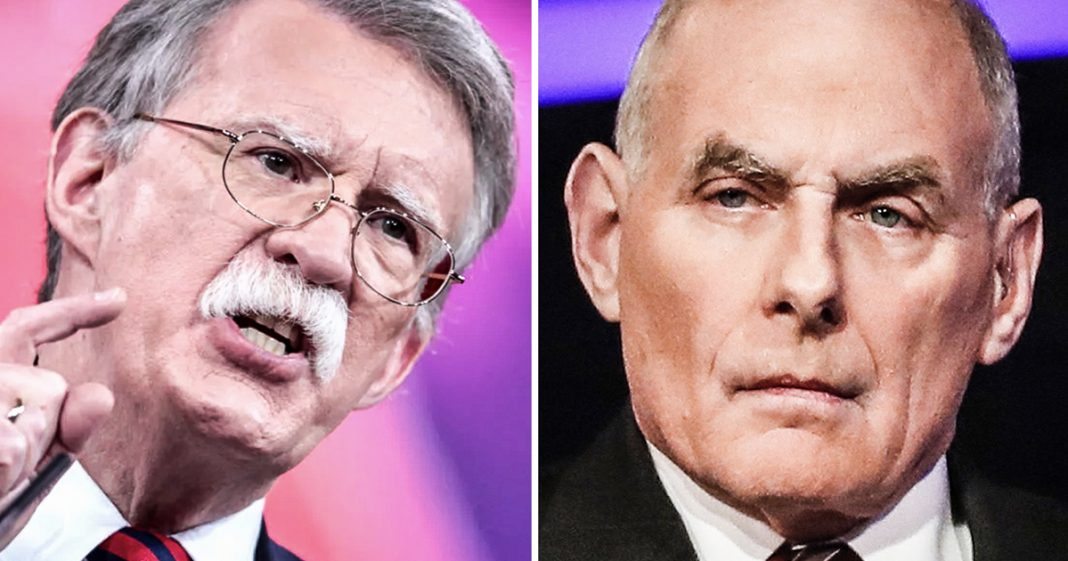 According to witnesses, Donald Trump’s chief of staff and his national security advisor had some very strong words for one another outside the Oval Office this week, and many believed that the extremely profane and heated argument would end with one of the men resigning their post. But neither John Kelly nor John Bolton left the administration following the exchange, but we can all be assured that this White House is anything but the “smooth running machine” that Trump constantly claims it to be. Ring of Fire’s Farron Cousins discusses this.

On Thursday of this week, according to witnesses inside the White House, there was a massive, profane shouting match outside of the Oval Office between Donald Trump’s Chief of Staff John Kelley and his National Security Advisor John Bolton. The two of them were allegedly arguing about immigration, specifically Donald Trump’s repeated claims that there is this massive caravan of people headed to the United States to cross our border. They’re all mad about it, obviously, and so the two, Bolton and Kelley, were arguing over the effectiveness of Department of Homeland Security Chief Kirstjen Nielsen.

Now, John Kelley, according to those who witnessed the argument, was defending Nielsen saying she’s doing a good job protecting our border. She’s doing a good job putting all those little kids in cages. John Bolton, on the other hand, was unhappy. She wasn’t doing enough. Maybe there aren’t enough kids in cages, and maybe we don’t have enough cages on hand to put everybody from this massive caravan into cages.

The Trump administration right now is hoping … and this is an aside to the little argument. We’ll get back to that in a minute. They’re hoping, right now, that this alleged caravan of migrants coming to the United States is going to give them a boost in the midterms. That’s why they’re talking about it nonstop, and that’s actually why Donald Trump is out there blaming the Democrats for this caravan, like somehow the Democrats did this. Matt Gaetz, my idiot congressman, who might actually be the dumbest person on the planet at this point, is spreading a conspiracy theory right now that George Soros paid these people to join an immigrant caravan down in Honduras and make the trek all the way to the United States. Matt Gaetz, a Republican congressman, is actually spreading that conspiracy theory right now.

Back to the fight. Right? That’s what everybody wants to know about, John Bolton and John Kelley profanely screaming at one another. Well, unfortunately, there’s not too much to add to that, other than people said that, at the time, they figured when this fight was over, it was basically going to end with either John Kelley or John Bolton immediately resigning on the spot. Neither happened. Both men still in the White House. According to Sarah Huckabee Sanders, there was a disagreement, but there’s no animosity. There’s no hard feelings between anyone there in the White House. Everybody’s friends. Things just sometimes get a little heated.

The White House is falling apart. It’s falling apart from the inside. None of the people get along with one another. Sarah Huckabee Sanders still, to this day, incapable of telling us the truth about what’s actually happened, and the only way we get accurate reports is when witnesses inside the White House decide to talk to the press. This entire administration is falling apart. They’re relying on conspiracy theory talking points to try to energize their base ahead of the midterms, and the American people are suffering as a result of it. I’m terrified to think what this administration is going to do as that group of immigrants gets closer to this country. Trump has threatened to send the military down there to shut down the border, and if that happens, you can guarantee that there will be killings at the hands of the United States military trying to protect this border from Donald Trump’s imaginary threats.