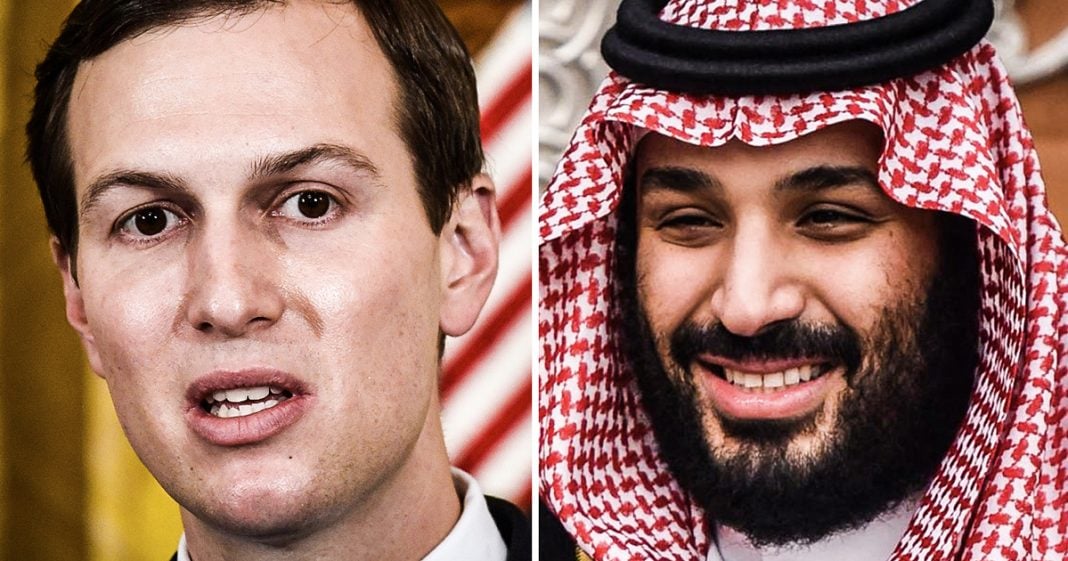 According to new reports, Jared Kushner has been helping soothe Donald Trump’s nerves about the death of journalist Jamal Khashoggi at the hands of Saudi Arabia, telling the President that the public is going to forget about it very soon. While the public does have a short attention span, an administration that is covering up the death of a permanent resident at the hands of a foreign government isn’t the kind of thing that people seem to gloss over, especially considering the financial connections between the two families. Ring of Fire’s Farron Cousins discusses this.

Jared Kushner’s once again found himself back in the headlines. As usual, it’s for all of the wrong reasons. This time, it’s because reports are telling us that Jared Kushner is actually the person inside the White House trying to convince Donald Trump to believe Saudi Crown Prince Mohammad bin Salman’s story, that they absolutely did not kill US permanent resident and journalist, Jamal Khashoggi. Jared Kushner is the person in the White House telling Trump, and the rest of this administration, basically, to look the other way, as this journalist was murdered … to not ask questions, and to go easy on Saudi Arabia, because, as Kushner points out, this is eventually gonna blow over like so many other things in this country blow over. There’s always that next outrage right around the corner, and everybody’s gonna forget about this one.

According to reports, Kushner actually talked about the fact that, “Hey, yeah, I mean, remember a few months ago when Saudi Arabia killed 40 children on a school bus coming back from a field trip, and everybody was outraged? Then, everybody forgot? Yeah, it’s gonna be the same thing with this dead journalist that was ripped to pieces with a bone saw.” That’s what Jared Kushner is advising the president right now. To be honest, in most instances, Kushner would actually be right here. We do have an attention span, as a public, of that of about the lifetime of a house fly, at this point. This is such a serious issue.

We know, based on all of the evidence, all of the reports that have come out over the last two years, that Jared Kushner has been unusually close to the Saudi royal family, and other members of the Saudi Arabian government. It is likely, based on reports that have come in, that the Saudis actually played more of a role in getting Donald Trump elected than any other country. We know that Robert Mueller has a little bit of information on that. Maybe it was enough to go on, maybe it wasn’t.

Jared Kushner is at the dead center of all of this. He is covering something up, and hopefully, one of these investigations happening now, or maybe one that happens in the very near future, is gonna uncover all of the dirty deeds about Jared Kushner. We’re gonna find out exactly what this little weaselly character actually knew, and how he helped this administration, and the Saudi royal family cover it up.