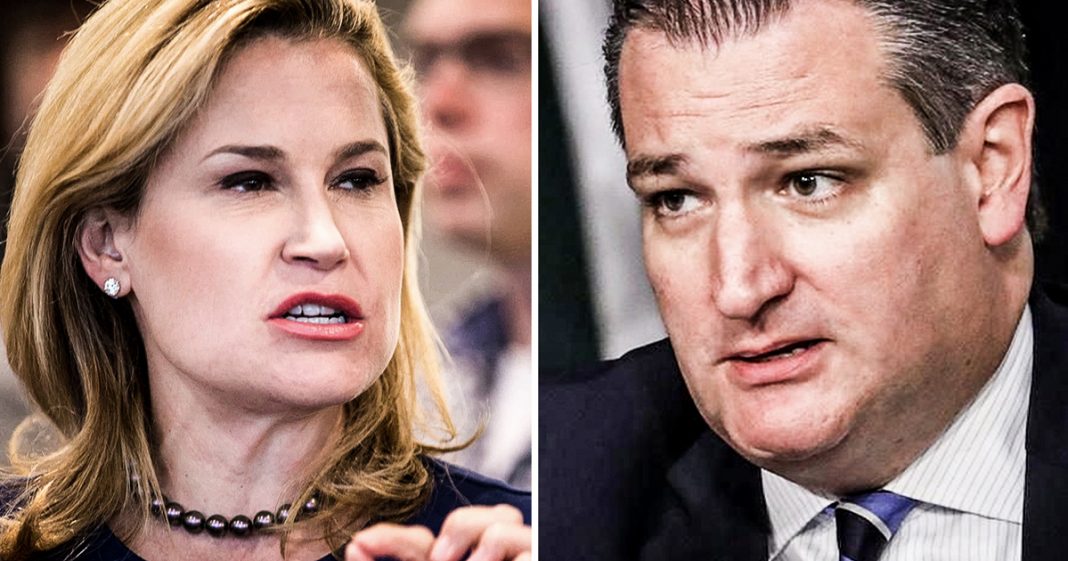 The Atlantic ran a profile of Heidi Cruz, wife of Republican Senator Ted Cruz, this week, and there are some pretty breathtaking moments mention in the piece. The big takeaway is that Heidi is not happy with her life, she’s not happy with her husband’s career, and at times she’s clearly not a fan of who he is as a person, either. This woman wants to get away as fast as possible. Ring of Fire’s Farron Cousins discusses this.

I’m not sure if you’ve taken the time to read the Atlantic’s profile of Heidi Cruz, the wife of Republican Senator Ted Cruz. But if you haven’t, please go read that article. The reason for that is not because Heidi Cruz is a highly interesting individual or maybe gives us some better insight into Ted Cruz, no. It’s because you will read a story of a woman who not only hates her husband, but clearly hates her entire life.

The big takeaway from this Atlantic profile of Heidi Cruz was that this woman is unhappy with every horrible decision that she has made and though she made those decisions for her husband and she has regretted it every day since then. You almost feel sorry for her. You shouldn’t and I’ll get to the reason why in just a moment.

But here’s the thing, you’ve seen a lot of stories going around the last day and a half people analyzing this story and mocking her for the statement that Ted Cruz only gets paid $174,000 a year as a senator. We’re not buying our second home anytime soon, Heidi says, because she has to be the breadwinner of the family and bring home the big paycheck because Ted Cruz only makes $174,000 a year.

But if she is the breadwinner, and so her paychecks each year are more than $174,000, that still puts them over seven times more money each year at least, than the average American household who makes under $60,000 per year. Does she not understand that? I mean, this woman is actually an investment manager at Goldman Sachs with a net worth of close to $5 million and she’s whining about the fact that we’re not close to buying our second home anytime soon. That’s a lie.

Heidi Cruz could go out today and buy no fewer than 10 homes that each cost more than the average American home and they would still be perfectly fine financially. $174,000 in Ted’s take home pay, is almost three times as much as the average American family makes in an entire year. And you Heidi as an investment manager at Goldman Sachs, make more than Ted does. You’re absolutely despicable. You’re just as greasy and slimy as him because the only thing you care about is money. And that’s the other big takeaway from the article.

And she even admitted at one point, when they had kind of first moved out there a little while after that, she walked out basically almost on the freeway and just started sobbing to the point where a passer by called the police, they came and got her and they did determine at the time that she was a danger to herself. So we’re talking about his wife might have possibly been ready to kill herself, according to the officers who came there because she was so unhappy with the decision she had made to follow Ted Cruz and his ambition while giving up hers.

Now, here’s the reason why I don’t think you should feel sorry for Heidi Cruz and it’s because they have two daughters, and they have ruined those two daughters. One part of the article talks about the fact that they were telling their daughters when Ted Cruz was running for president that Heidi was going to quit her job and work full time for daddy’s campaign. One of the daughters, Caroline who was seven years old at the time, asked her “Mommy, if you win are you going to get paid to be first lady? Are you going to get paid?” Well she said, “Well, no. I’m not.” And the little girl said, “Well, then that’s a bad deal for you. We shouldn’t do this.”

At seven years old, they’ve already taught their child to value money over anything else. So yeah, I don’t feel any sympathy that Heidi Cruz is upset because she married a piggish, slimy scumbag and that she gave up her ambitions which clearly was also just the love of money because that’s what she keeps coming back to in this profile. Money and success for her, money and success. And she briefly mentioned, “I left my family. I left my friends. But meh, I love this career.”

You want to be a career person and go chase money, whatever, fine. Go do it. But you have kids and you’re teaching them that money is the most important thing on the planet, and nothing could be further from the truth. I think the biggest takeaway from this entire article is that yeah, Ted Cruz is a walking talking piece of crap and his wife Heidi isn’t much better.