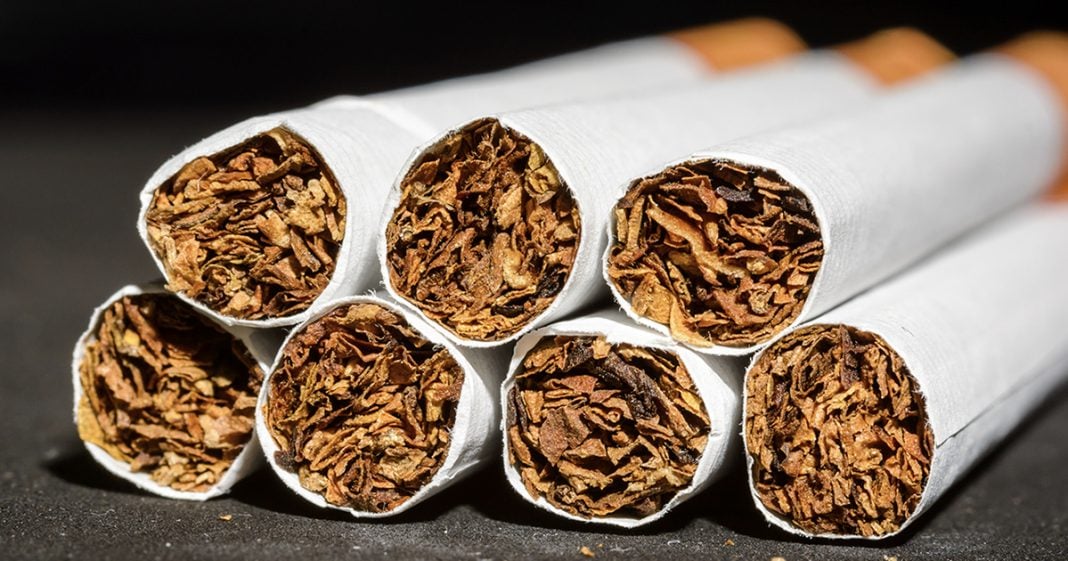 Tobacco companies are pouring millions of dollars into the midterms this year, trying to fight off tax increases on their deadly products that would be used to fund healthcare expansion in some states. Their deceptive ads are exactly what we’d expect from companies who spent decades lying about the lethal qualities of their products, and now they have the audacity to fight against healthcare expansion when their business is to kill people. Ring of Fire’s Farron Cousins discusses this.

Well it’s been quite some time since big tobacco companies became, really, politically active. They’ve always given money to politicians. But basically since their reputation died in the early 2000s, should have died a lot earlier than that, but ever since then they’ve kind of been really quiet about their political spending, and haven’t been as big as some of the other heavy hitters.

Well now, in this year’s midterms, big tobacco has re-emerged and they are spending millions of dollars to prevent the expansion of healthcare coverage in states across the US. Right now most of their efforts are actually focused on the state of Montana. Because there is a ballot initiative this year in Montana that would increase the taxes on cigarettes by $2 per pack. They would also impose a tax on e-cigarettes. And all of that money raised in those taxes would go to expand Medicaid in the state, as they state opted to expand it under the Affordable Care Act, Obama Care. And they need a way to fund it better.

Right now, almost 100,000 citizens in the state of Montana are getting that Medicaid expansion that may not survive if they do not get these additional tax revenue to pay for it. Big tobacco companies, including Altria, which is Phillip Morris, basically, they’ve spent $12 million. And they’ve given it to this group, Montanans Against Tax Hikes. Because they don’t want to pay more taxes. Even thought in reality, what’s gong to happen is you put more people on the Medicaid expansion, most of that money gets reimbursed by the federal government. So you actually end up saving money here.

However, if those people were to go to just regular Medicaid, the amount that the federal government reimburses the state for that is much lower than they do under the Medicaid expansion. So the state loses money. So raising these taxes on this products that are literally designed to kill people, would actually give more people healthcare coverage, it would save the state money. Everybody wins except for the tobacco companies.

And that’s why they’re pouring millions of dollars into this one initiative, just to defeat it. Because this is a test. We’ve seen this. It happens all the time. Wisconsin with their tax on the teachers. They actually succeeded and then we saw it start popping up in other states. Florida, kind of pioneered the voter purges. They got away it, and now it’s everywhere. Montana, kind of going the other way and doing a good thing. Raising taxes on a substance that is designed to kill its user over time. And using that to pay for healthcare expansion.

If it works in Montana it’s going to spread to other states. And that’s why big tobacco is so scared right now, because they have to defeat that initiative and send a message to other states, that if you try to do this we’re going to come and defeat it there, too.

But ultimately the decision is up to the citizens of Montana. And hopefully they can se through the lies and propaganda coming out of the tobacco industry. Because this is an industry that really pioneered deceptive ads, deceptive marketing, and propaganda. Hopefully the citizens of Montana know better than that. And hopefully they understand that this groups, Montanans Against Tax Hikes is really at this point, do to the massive amount of funding they’ve gotten from big tobacco, is just another tobacco front group trying to protect the profits of these deadly corporations.