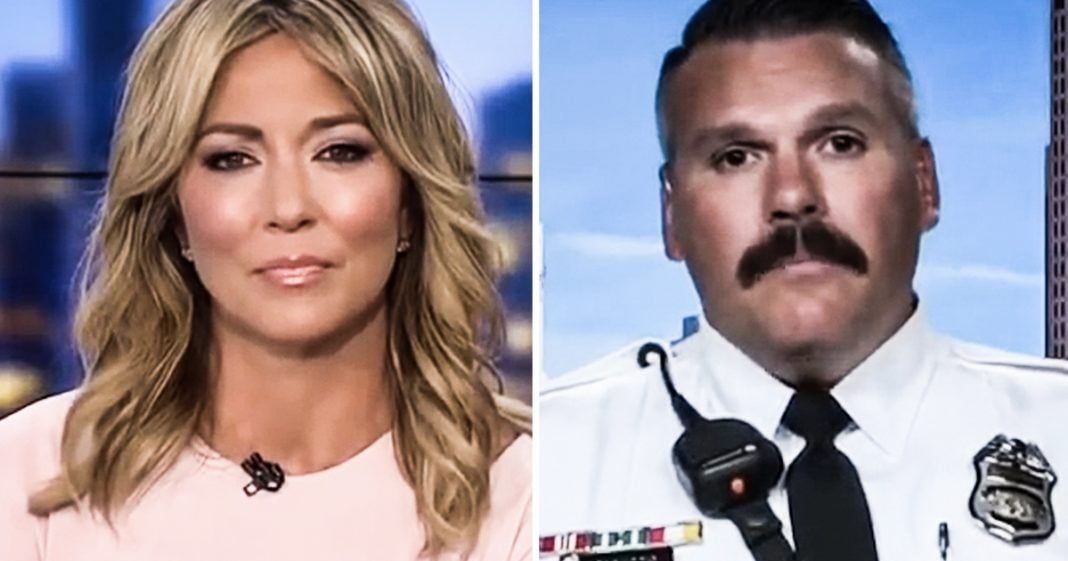 While it is certainly a good thing when police officers DO NOT shoot innocent people, we’ve actually reached the point as a country where we’re having to heap praise on cops who do what they are supposed to do. That’s exactly what happened during a CNN interview this week where they featured a police officer who didn’t shoot and kill two children playing with BB guns and instead gave them a stern safety lecture. The cop did what he was supposed to do, and sadly he appears to be the exception. Ring of Fire’s Farron Cousins discusses this.

You know it’s a really sad day in the United States when we actually have to praise police officers for not going out there and murdering young black men. And unfortunately that was the situation that CNN was in earlier this week when they brought on a police officer who came across two young African American boys. They were playing with BB guns and the cop didn’t shoot them. Instead, he just gave them a lecture. Basically the cop did his job, he did what he was supposed to do, and CNN brought him on because that’s so rare these days, they had to thank him. Here’s a clip from CNN, take a look.

CNN reporter: A Columbus police officer was responding to reports of two young black men allegedly waving a gun, and when that officer, officer Peter Casuccio, arrived on the scene he did not shoot, instead he tried a different approach that ended with a really important lesson, and it was all caught on his police body camera. Watch this.

Peter Casuccio: Here’s the thing, are you scared?

Peter Casuccio: Okay. You know why you should be scared?

Peter Casuccio: This is getting kids killed all over the country.

CNN reporter: Again that officer, Peter Casuccio, with the Columbus police department is with me now. Officer Casuccio, thank you so much for just being with me. What a lesson for those two boys. I read that you said you went into dad mode, how do you mean?

Peter Casuccio: Yeah. So I’m a dad. I have a child of my own, I have another one on the way, he’s due in February.

Peter Casuccio: Yeah, thanks. You have an obligation when you put this uniform on to take a parental role sometimes, right? If you have two kids in front of you and it almost ended in deadly force. You have an obligation as a steward of your community to the men and women you work with to grab them by the ear and sit them down and say, “Hey man, this is not the way it works.” This is getting kids of all colors, from all different types of neighborhood killed on an almost, I hate to say, annual basis at this point.

CNN reporter: It is, that’s the truth, and good on you for doing what you did.

And again, that’s how low the bar is set for police officers today. She said, “Good on you.” Good on you for not murdering these two young children who were outside playing. Yeah okay, the BB guns looked real. Alright, you know a good police officer should still be able to determine, I don’t know if you’ve ever seen a BB gun pistol, but you can obviously tell that it’s not a real firearm. Unless these kids modified them in any way, doesn’t take a really skilled person to see what they have there. And yeah, the officer of the body cam footage there, he’s a little harsh with them, but I think that was more due to the fact that he was afraid of what he almost did to the kids. Not anger at them, anger at himself. And yeah, that’s how cops are supposed to be.

You sit the kids down and you say, “Listen, guys, there’s a real problem with this in society. You’ve got cops who aren’t as smart as me who would immediately just walk up, maybe not even get out of their car and shoot you.” That’s actually happened. It’s almost like a drive by on the behalf of the police officers. But this cop didn’t do it, and he’s getting praise? And yeah, I do feel like he deserves praise, and I hate to say that because that’s how low the bar has been set.

We now have to treat a cop who just did his job like he’s supposed to as a hero. And maybe he is a hero, maybe he is the shining example that we need to hoist upon our shoulders. I don’t know. I don’t even know this guy’s history. However, there is a real problem of horrible police officers in this country shooting first and never asking any questions. So at least in this one instance there’s two young men right there who didn’t go to an early grave because a cop was terrified of a couple of children.