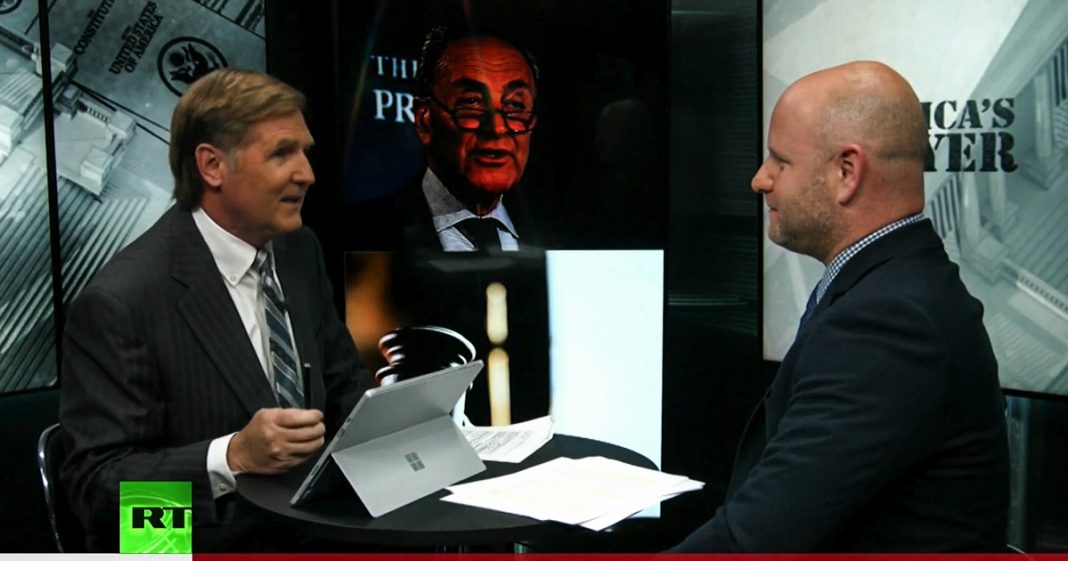 Via America’s Lawyer: Democrats in the senate, led by Chuck Schumer, agreed to put another dozen corporate friendly conservative judges on the bench for a lifetime. Mike Papantonio is joined by Farron Cousins to discuss.

Mike Papantonio: Democrats in the senate, led by Chuck Schumer, just gave the green light to put another dozen corporate friendly conservative judges on the bench for a lifetime. Now, I don’t know how it gets crazier than this. You got Schumer. You got democratic leadership all over the Kavanaugh issue. “Oh, this is terrible. This is awful.” But here’s what they do to their supporters. These progressives, they’re out there, “Oh, man. Schumer’s great. Democratic leadership is great. Isn’t Cory Booker great? Isn’t Feinstein great?” Well, let me tell you what they did. They said, “We want to go home and campaign, and we’ll make a deal with McConnell. And the deal they made is we’re not even gonna look at your 12 candidates. We’re just gonna approve them and these federal judges are now on the bench for a life time.

Farron Cousins: Exactly. Basically, Schumer said, “Look, all my people over here, we’ve already got our plane tickets booked. We need to get out of DC. We’ve got campaigns to run, so I know we just made a big stink about this horrible guy you’ve put on the Supreme court, so we’ll give you another 15, because remember we just gave you 11 three weeks ago. So you get a total of 26. Can we please go home now, Mr. McConnell?” And McConnell says, “Heck yeah! That sounds like a great deal for me!”

Mike Papantonio: In other words, the leadership that these progressives … If I hear it one more time from a progressive, “Oh, we have the leadership behind us now. Look what they did on Kavanaugh.” Are you kidding me? They go through Kavanaugh and then they let 12 judges that, by the way, all were hand-picked by the most conservative organization in America, the Federalist Society, hand-picked every one of them.

Mike Papantonio: They didn’t even ask these people questions. They sent them through and they went home and life, as usual, asking for the votes and trying to churn up some level of energy on behalf of progressives when they’re out there campaigning.

Farron Cousins: Well, it makes you think that the whole Kavanaugh thing was only political theater. Because if democrats actually cared about conserving the judiciary and preserving the reputation of the judiciary here in the United States, they would be concerned about these 15 judges, and the 11 judges from a couple weeks ago, and the, “Oh, by the way” other 28 lifetime appointments that they sent through earlier this year. And I made a prediction after those 28 went through. I told you, you were sitting right here! I said, “He’s gonna get 50 by the end of the year.”

Farron Cousins: They just gave him. They just put him over the top.

Mike Papantonio: I remember it exactly. He is over the top now. McConnell, can you imagine that … What do they call him, the turtle? Turtle-man McConnell outmaneuver … Well, I can see just about anybody outmaneuvering Schumer, but what we’d never grasped about Schumer … We did, because we talk about Schumer all the time. He’s not a democrat. Schumer is a republican. He’s just as republican as he can be, dressed up like a democrat, and democrats are so tribal that … “Oh, he’s one of us, so he must be progressive, too.” Just like they analyzed Nancy Pelosi the same way. Just like they analyze all the time. It’s this tribal analysis and Schumer gave it up, 12 federal judges, lifetime appointments, every one of them appointed by the most conservative organization in the country, the Federalist Society.