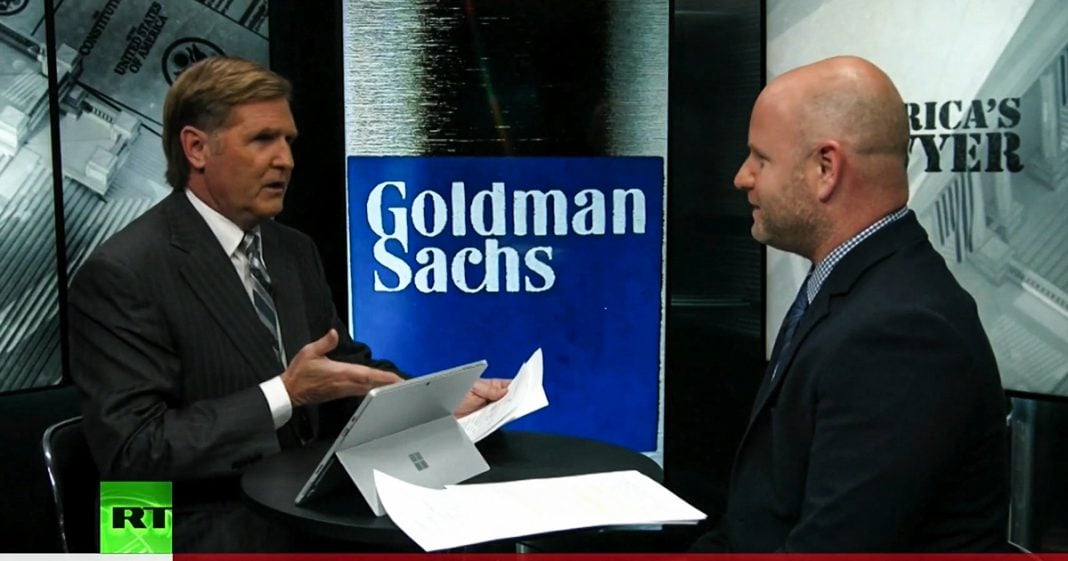 Via America’s Lawyer: Mike Papantonio and Trial Magazine Executive Editor Farron Cousins take a look at how Goldman Sachs’s relationship with Regulators has prevented any of their Executives from ever having to see the inside of a prison cell.

Mike Papantonio: Goldman Sachs has had to pay more than $9 billion in fines over the last few years for violating federal and state laws. That number may seem high, but when you factor in the billions that the bank has pulled in from profits from financial crimes, those crimes start to look a lot smaller. So how do banks like Goldman Sachs keep getting away with it? It’s simple: they’re best friends with regulators who are supposed to be looking over their shoulder.

Joining me to talk about this story and other top stories of the week is Farron Cousins, Editor of The Trial Lawyer Magazine. Farron we see this Goldman … I don’t know how many stories we’ve done on Goldman Sachs, and we don’t do a story on Goldman Sachs until we find out that it rises to the level of criminal activity. And the quick note on this is if we go back and look at the criminal activity, it has ended up costing them $9 billion.

Now, again, but what’s it for? Toxic security abuses. In other words, they’re selling stock, they know there’s a problem with it, they sell it anyway. This is exactly what we saw before the burn-down, right? They were holding all of this toxic stock that they sold, and they were getting rid of theirs while they were selling it to mom-and-pop operations. Mortgage abuses, foreign exchange market manipulation. Fraud, basically. This is all fraud.

Mike Papantonio: But not one of them have gone to prison. Take it from there.

Farron Cousins: Right. I mean, we’ve got such a massive list of penalties, penalties, penalties, and it’s all just financial penalties. I mean, when you commit $9.6 billion worth of fraud or criminal activity, basically, which is what Goldman has done since the year 2000, $9.6 billion worth of crime, you should be in jail. Somebody from your organization needs to be behind bars. But we’re finding out now, ’cause this great new book by a woman by the name of Carmen Segarra, she actually worked in the New York Fed’s Office, and basically turned into a whistleblower where she said, “Listen, the regulators are in bed with Goldman Sachs. Many of these regulators came from Goldman Sachs, where they worked for decades. They know crimes are being committed, they’re sweeping it under the rug, and there’s still this incestuous relationship between the two.”

Mike Papantonio: Here it is. Now, all of a sudden, well there’s no surprise here, you’ve got them denying it. They’re denying it even with the recording. This woman has recording, hours and hours of recording these thugs working with Goldman Sachs. She gets the inside information about how they’re engaged in insider trading. She even has on the recording, she’s talking about insider training, and some cat at Goldman Sachs goes, “Yeah, it’s against the law, but it’s not a problem unless we get caught.” That’s just the nature of what the recording is.

Here’s what I found interesting about this. Goldman Sachs … now think about this … Goldman Sachs determined that they would not have a written conflict of interest policy. Now, you know why, because if they have a written conflict of interest policy, what that leads to is what we call shareholder derivative suits. The shareholder says, “Well, I don’t have to prove a lot. All I have to do is prove that you violated your own policy.” So they say, “Well, no, we’re not going to write it down. We’re going to say there is no conflict policy.”

What is your take on that?

Farron Cousins: I mean, this has essentially become a criminal enterprise. And it’s not just Goldman Sachs. We see this with a lot of banks. But to me, one of the bigger things here, too, is how corrupt the New York Federal Reserve is, because when she was talking about the insider trading, it’s not just the people at Goldman who are engaging in it. She said there were people from her office with their knowledge of what banks were doing who were trading their own stocks based on that. So we have insider trading also from The Fed.

Mike Papantonio: The New York Fed is involved in it.

Mike Papantonio: The New York Fed, you know, if you’re going to lock some people up, lock them up right along with the Goldman Sachs.

Mike Papantonio: You don’t change culture by letting these freaks go. And that’s what we’ve done for too long. Again, I come back to this every time. Eric Holder, “We’re going to do something about the crime on Wall Street.” You know what he does? Zero. He does nothing. In fact, he goes back to work with Covington & Burling, which is the very people that used to defend all these Wall Street criminals.

Farron Cousins: Well, it’s really sad when we have to look at the last time bankers actually got punished was during the Reagan Administration.

Mike Papantonio: 800 of them went to prison, didn’t they?