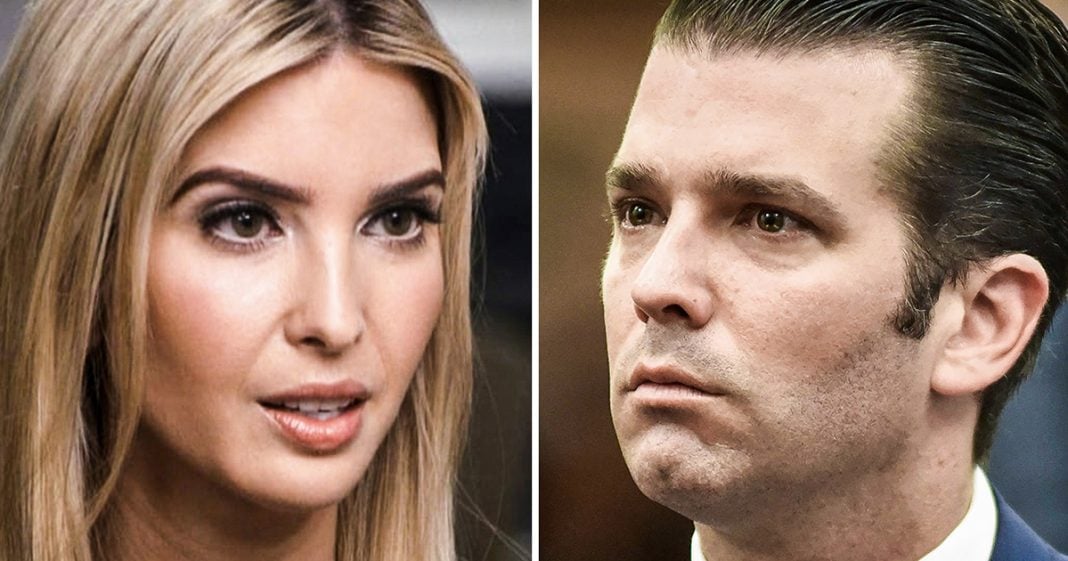 The FBI has now gotten involved in a scheme run by the Trump family where they intentionally lied to investors about properties that they owned. According to reports, the Manhattan District Attorney was ready to file charges against Donald Trump, Jr. and Ivanka Trump, but the head of their division decided to let them off without so much as a warning. Bribery was likely involved, as Ring of Fire’s Farron Cousins explains.

Well you can go ahead and add another investigation onto the growing list of different investigations happening right now with the Trump family because both Ivanka and Donald Trump, Jr., have now found themselves kind of embroiled in this potential bribery investigation into the New York, or Manhattan actually, Attorney General’s office. Here’s what’s happened here. We had Cy Vance, who was a democrat, who was one of the attorneys in that New York, Manhattan office and if that name sounds familiar it’s because we’ve talked about him in the past because he’s the guy who took a bunch of money from Harvey Weinstein’s lawyer and then dropped the investigations into Harvey Weinstein. Well according to this new FBI investigation, they’re pretty confident that Cy Vance did the exact same thing with Ivanka and Donald Jr.

You see Don Jr. and Ivanka were being investigated for potential fraud made on behalf of their business to investors specifically relating to statements that Ivanka and Don Jr. made to investors. They were telling investors that some of the units that they owned had sold more units than they had or that they’d gone out and just sold 100 units when, in fact, they only sold one or zero. And by telling investors that these units were selling like crazy in these buildings that they owned, it incentivized investors to come forward and put more money into the projects. That is criminal fraud. And, depending on what the investigation found, there could also be some conspiracy to commit fraud in there as well.

Prosecutors in New York presented all this evidence to Cy Vance and told him, “We absolutely need to prosecute this”, but then Cy Vance met with Marc Kasowitz, one of the attorneys for the Trump family and the Trump organization, he got tens of thousands of dollars in donations from Kasowitz and then Cy Vance decided, “You know what, I’m going to go against the recommendation of all my prosecutors and investigators and I’m just going to bury this and we’re not going to do anything about it.” After he decided to not go forward and prosecute, Kasowitz made another donation, I think, it was $32,000 was the second donation he made to Cy Vance. The first one was $25,000. So, $57,000 just to bury a potential prosecution of Ivanka and Donald Trump, Jr. for fraud.

Now Cy Vance is actually the target of this latest FBI investigation, they’re also investigation whether or not he took bribes to end the Harvey Weinstein thing but this is a pretty clear cut case of bribery. He got money from Kasowitz, he dropped the case, then he got more money from Kasowitz. Yeah, pretty hard to argue that that’s not bribery. Cy Vance obviously the kind of guy that’s probably going to end up in prison and that’s exactly where he belongs. And if something like that happens, then guess what folks, those prosecutions that those investigators and prosecutors in that Manhattan office wanted to do in the first place, those are going to happen after Cy Vance is put away. So, Ivanka, Don Jr. may think things are all well and good right now, but the walls are closing in on them. And the best part about it is that they’re closing in on them at the state level, which means no matter what happens, Daddy won’t be able to pardon them if they get convicted.