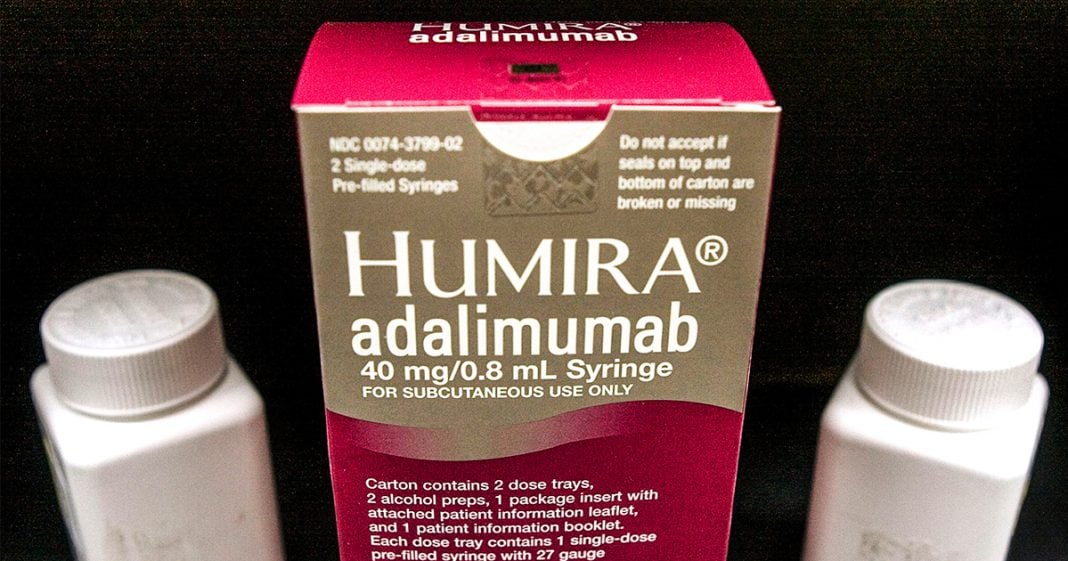 Bart Chilton: Europeans who take the world’s biggest selling drug, Humira will soon have the option of buying cheaper versions of the medication, but that’s not going to happen anytime soon in the United States. Here to explain why is legal journalist Mollye Barrows, a contributor on America’s Lawyer. Mollye, it’s good to see you again. It’s been a few weeks. Why are the cheaper versions of Humira being rolled out in Europe?

Mollye Barrows: It’s a key patent that actually expired this week, Bart, so that’s going to make the market open for what’s called biosimilar drugs to come on the market. These are pretty much identical to the drugs that are already like Humira, biosimilar is why they call them. They’re pretty much near copies of the drug. They’re going to be launched at a lower price.

How much lower? We don’t know exactly, but it’s going to be 10% to 25% of what it costs now in some of the bigger drug markets in Europe. Now, you’re talking about a blockbuster drug. This is the most popular drug in the world, if you will. Four billion annually in sales in Europe, and it’s the second biggest market, in fact, after the United States. Biosimilar versions are gonna be available, rolling out, they believe starting out this week in Europe.

It’s expected to save England’s national health service nearly two million dollars a year. This is a big deal. Good for Europe. They’re going to get these cheaper versions of what is an extremely popular and pretty expensive drug.

Bart Chilton: If they’re doing four billion dollars, and now they’re available to do these biosimilar drugs, Mollye, I’m curious about what are the legal differences in patents for Humira in Europe versus, say, the United States. What do we know about that?

Mollye Barrows: Yes. It’s definitely a drastic difference. In Europe, It’s a much more legal-friendly environment to challenge a patent. Even though the main patent for Humira expired in the United States last year, there are 100 patents still attached to this particular drug in the United States from the pharmaceutical manufacturer, the company that makes this drug, AbbVie.

They, in fact, have filed two lawsuits to prevent other companies from bringing biosimilar products versions of this drug to the market. The main reason they say is because, they haven’t yet recouped their costs for manufacturing and development and this is only fair, but the problem is it gives them a monopoly. Just like it’s going to save Europe millions of dollar, it could save the United States billions as well.

I mean, you’re talking about a drug that’s gonna make 18 billion for AbbVie by the year 2022 is what they’re saying, in the United States. They are in no rush to remove these patents. In fact, the soonest a biosimilar or generic version of Humira could be available in the United States is not until 2023.

Bart Chilton: Mollye, we’ve seen over the years, in the States, where the drug prices are so darn high in the US that a lot of people, what are consumers who need them simply can’t afford them and what they’ve done because we have such a fatally flawed system here in the United States, they’ve gone to other places.

They’ve gone a famously, I guess, to Canada for cheaper drugs. I know a lot of people, it’s not been as prevalent in the last decade or so, but would go to Mexico to buy drugs at where are you either need not much of subscription … A prescription, rather, but you can go in and have a five minute visit with a doctor and get a prescription.

I’m curious about whether or not Humira and others, Humira and other drugs in the future, may be cheaper in places like Canada, Mexico, or other places around the world. I know, just let me preface by saying, these are difficult laws to look at all over the world. I know you haven’t looked all over, but what do we know about lower cost drugs throughout the world?

Mollye Barrows: I tell you, it’s interesting. When I started to glance into patents in the pharmaceutical industry, it is one of their biggest ways that they control the drug market worldwide. I mean, it is tied to legislation connected to the World Health Organization, and speaking of countries where you can get those generic versions of drugs, talking about India.

India has what’s called a patent barrier … They’ve removed the patent barriers, if you will. That has enabled them to be able to create a lot of generic drugs that otherwise they wouldn’t be able to if they were inking deals with big pharmaceutical companies to let them produce or manufacture within their country. They end up being able to produce a lot of these themselves. In fact, they have so many that they’re able to give it to other countries.

But it’s interesting because India is trying to make some trade deals right now with the European Union and it’s going to include changes to their patent system. Again, these patents are how these pharmaceutical companies really control the price. And the United States, one of the biggest industrialized nations in the country, we should be able to provide these medications to our consumers, but our legal system is more friendly to the corporations and not to consumers.

Bart Chilton: Eloquently said. We appreciate your little view around the world with all our global viewers. That’s important stuff. Mollye Barrows, legal journalist and a contributor for America’s Lawyer. Thanks so much, Mollye. Great to see ya.