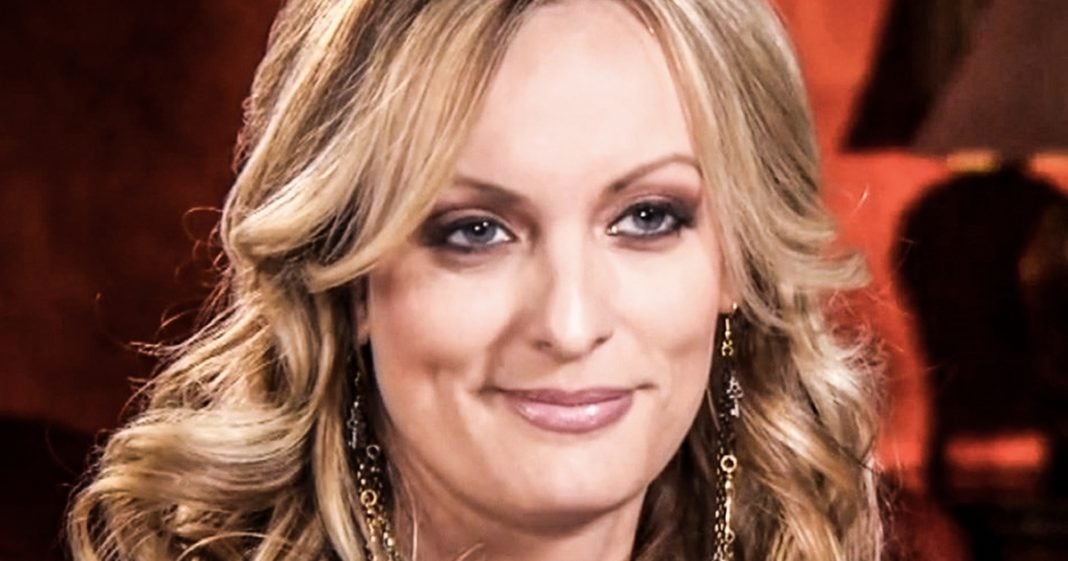 The renewed feud between Donald Trump and adult film star Stormy Daniels has left nearly every American with a bad taste in their mouth. We’re learning way more than we ever wanted to know about Trump’s endowment, and we’re all worse off for knowing it. Have we finally hit rock bottom as a country if this is what’s happening in the highest office of the land? Ring of Fire’s Farron Cousins believes we have.

Well, ladies and gentlemen, it’s official. We’re a nation of idiots. I don’t know if you’ve been paying attention. I assume everyone has because it’s been all over the news for the last 24 hours even longer at this point. The whole Donald Trump in Stormy Daniels’ feud. Okay. Tuesday morning, Donald Trump gets on Twitter, gloating about a court case that really was inconsequential, and he called Stormy Daniels, the adult film star, who he had an affair with and paid her $130,000 to not tell anybody about it.

He called her horse face. Okay, obviously, can’t do that, especially can’t do that if you’re the president of the United States. So then Stormy Daniels, AKA, Stephanie Clifford, fires back, and here’s her tweet. “Ladies and gentlemen, may I present your president.” She was responding to his tweet when she said that. “In addition to his shortcomings, he has demonstrated his incompetence, hatred of women, and lack of self control on twitter again, and perhaps a pinch on for beastiality. Game on, Tiny.”

Now, see, half of Stormy Daniels’ response there was spot on phenomenal. You know, the part that demonstrated his incompetence, hatred of women, and lack of self control. 100% agree with you on that. Did I need the visuals of his quote, “shortcomings” and “game on, Tiny”? No, none of us needed that, and unfortunately, that’s where we’re at as a country though. Seriously, we have the president of the United States in a bitter public feud with an adult film star, who actually is in the right on this. She is the hero in all of this.

But nonetheless, she is giving us information about his endowment that we never needed nor wanted. He is insulting her appearance, which has just caused people to say, “Well, if you think she’s got a horse face, why’d you pay $130,000 to have sex with her?” And meanwhile, the entire public is getting dumber for it. We’re all suffering under this horrible reality show that has taken over Washington, D.C. We have people in this country dying because they can’t afford healthcare.

We have people in this country terrified about whether or not they’re going to have a job by the end of the day, because Donald Trump’s trade wars are causing us to hemorrhage jobs. Farmers out there who don’t know if they’re going to have enough money to survive to the end of the month. We have children locked in cages. We still have bodies buried under rubble in Panama City and Mexico Beach here in Florida that haven’t been discovered yet from Hurricane Michael, and we’re sitting here talking about a woman that the president had an affair with, insulting his penis size whilst he is insulting her appearance, and the rest of the country is burning to the ground.

This is what we get. Maybe this is what we deserve. Everything goes to hell, everything gets ruined, and we’re just sitting there like a bunch of jackasses watching the reality show for getting all of the real problems around us and forgetting the fact that we’re destroying this country, possibly irreparably. We absolutely as a country, as a whole deserve what’s happening right now, and that’s probably one of the most difficult things I’ve ever had to say.