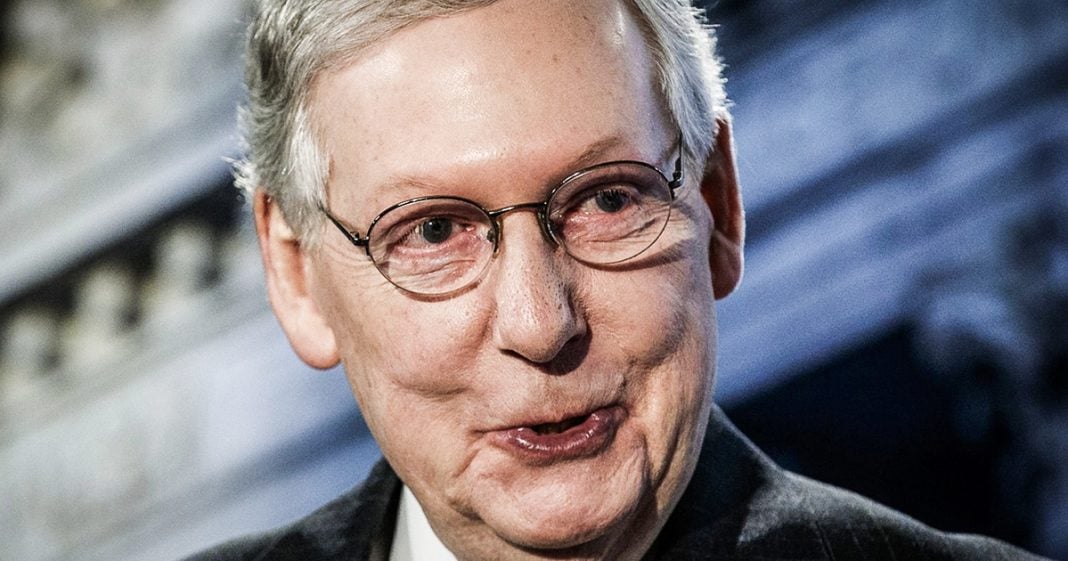 The United States is facing a massive budget problem as the deficit continues to balloon under the weight of the Republican tax cuts. But Mitch McConnell doesn’t think that his tax giveaway is to blame – he’s putting the blame on social safety net programs like Social Security, Medicaid, and Medicare. This has been the standard talking point from Republicans the second they passed those tax cuts, knowing that they’d have to slash our earned benefits in order to pay for them. Ring of Fire’s Farron Cousins discusses this.

During an interview with Bloomberg News the other day, Mitch McConnell let us know who’s really to blame for the ballooning deficit and the massive national debt that we have incurred as a country. And it’s not the wealthy elite who just got that massive tax break, it’s not because we’re spending hundreds of billions of dollars every single year on our over bloated military. No, no, no, it’s the fault of poor people. Poor people in the United States who depend on the federal government to give them the benefits that they’ve already paid for, those are the people who are screwing over our budget and ballooning our deficit according to Senate Majority Leader Mitch McConnell.

See McConnell is out there saying these things that he knows are not true because McConnell wants to destroy the social safety net in the United States. Specifically, and he mentioned these programs in his little interview, Social Security, Medicaid and Medicare, three programs designed to help the less fortunate in times of need. Social Security for the people who can’t afford or didn’t get a pension or didn’t get any kind of retirement package after working for their entire lives so Social Security provides a little bit of a cushion for those people. Medicaid, obviously for the underprivileged here in the United States, don’t have enough money to go buy private health insurance, they don’t get it from their employer so they can get these cost effective plans from the federal government. Medicare, same thing with senior citizens, they qualify for that, they can get on those plans. Doesn’t necessarily cover everything, most of them have to get supplemental insurance but at least it’s there to help them when they need it.

And here’s the thing. Here’s the thing that Mitch McConnell and Republicans keep forgetting, we’ve already paid for those plans. We’ve already paid for that safety net. Those are ours. And right now they’re telling us, and they’ve been telling us for over a year, we’re going to cut them, we’re going to slash and burn those programs to the ground because we’ve got to pay for that tax cut for the wealthy elite. That’s what this is about. That’s why Mitch McConnell was out there lying through his teeth in this Bloomberg interview to tell you that we’ve got to cut these programs. These poor, wealthy elite … I mean, how are they going to survive? Where’s their safety net? This is nonsense folks. And it’s madness, honestly, that’s what this is. This is madness.

People who are getting Medicaid or Medicare or Social Security, they’ve already paid for those programs. Those are their benefits. They have already earned them but Republicans want to come through, change the language and say no, these entitlement programs that people think they’re entitled to … Well, hell yeah, you pay into a program for 40 years, expecting the money to be there when you need it, you’re entitled to it. But I understand if you don’t want to use that language. Those are earned benefits, that’s the social safety net. It’s what helps keep the most vulnerable in society afloat. Call it what you want, but at the end of the day, those are benefits that people have already paid for and Mitch McConnell wants to take that away from them because he wants to give himself, his brothers and sisters in the Senate and House, and of course, his wealthy donors even more of our money. That’s what this is about. There’s no problem with the social safety net other than the fact that Republicans are trying to destroy it at every given opportunity.