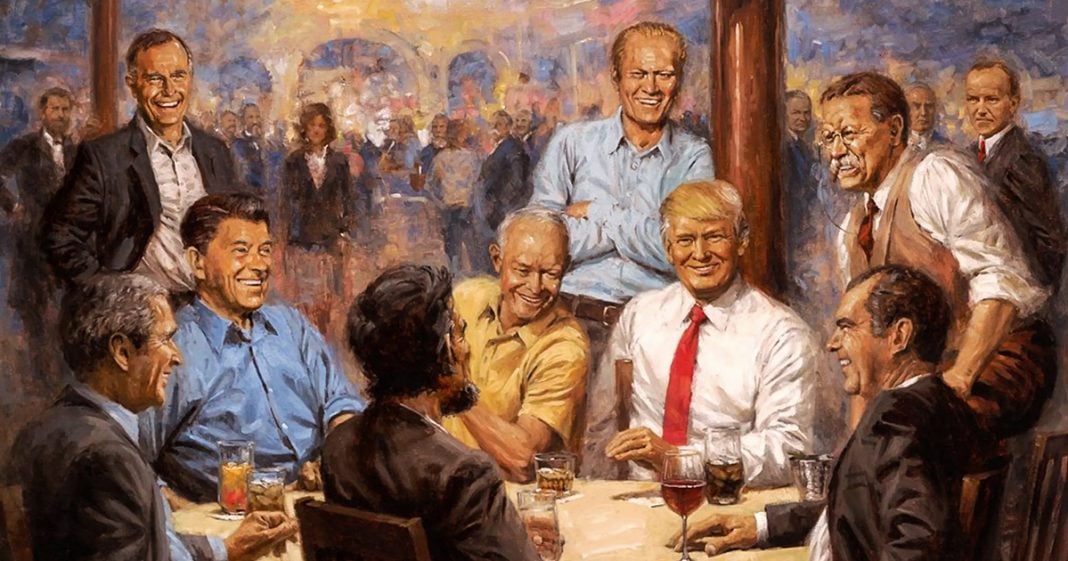 Donald Trump has a painting hanging up in the White House called “The Republican Club”, which features a much slimmer-than-reality version of Trump sitting around having a good time with former Republican presidents, including the disgraced Richard Nixon. The painting highlights the hero worship that exists on the Right, and creates a complete fantasy world that allows these morons to escape reality for a while, as Ring of Fire’s Farron Cousins explains.

So in case you missed it the other day, 60 Minutes run an interview with Donald Trump, they showed some clips from around the White House, and in one of the clips we caught a glimpse of a painting. And now that it’s been seen by the world, they’ve kind of released the full picture of the painting and it’s called the Republican Club. We have a picture of it here. So you could see in the painting, you have Donald Trump sitting there a little bit slimmer than he is in real life. In fact, I think he’s a little bit slimmer than he’s probably ever been since he reached his early 20s. But, you know, that’s beside the point.

So yeah, Donald Trump sitting there looking happy and thin, sitting with all of these former Republican presidents. They’re all having a good time, they’re all laughing, smiling, Trump’s got his diet coke and this is just one big Republican fantasy happening in this painting. Now, there is a little bit of backstory to it and we’ll get to that in a minute, but I have to point out something here about this picture. Not only is Donald Trump slimmer than he should be, I mean, look as a heavyset guy myself, you gotta just own up to it, dude. You’re fat, get over it, live with it unless you’re gonna do something to make your body better. You didn’t, so you got to get out of the fantasy there.

But secondly, Richard Nixon sitting right there in the painting. Really? This is a guy who resigned and disgraced so that he couldn’t be impeached and convicted while in office and you’ve put him there at the table? What the hell? Do you not know who Richard Nixon is? Do you not know the backstory on him? Look, the artist Andy Thomas is the guy who did this and it was not commissioned by Donald Trump, it was just a painting he decided to do. He actually gave it to Darrell, sold it to him, I’m not sure if he gave it or sold it. And then Issa, Republican Congressman Darrell Issa is the one who gave it to Donald Trump.

The artist, Andy Thomas, he paints both Democrats and Republicans. He’s got another painting from a few years ago of a bunch of Republican presidents sitting around playing poker. He’s got a painting of a bunch of Democratic presidents sitting around playing pool. You know, he’s kind of a nonpartisan guy. But he really went overboard on trying to make Donald Trump look like an actual human being in that picture other than a monster. But again, this is a complete Republican fantasy and this artist played right into it. I don’t know if he did it intentionally and I sure as hell don’t think that Republicans are gonna understand it, but that picture perfectly highlights this idealized fantasy that they have with their former Republican presidents.

With Reagan, the hero-worship we see there, we see it now with George W. Bush. They’re looking back like, we’re the party of Lincoln. No, you’re not. It’s been over 100 years. I mean, hell, we’re coming up on nearly 200 years since that time. You have nothing in common with Abraham Lincoln or anything that existed back then other than the fact that you want our policies today to take us back to those times. Lincoln wouldn’t have been a Republican today. Hell, Ronald Reagan probably couldn’t even pass for a Republican today and he was horrible. But he did throw some bankers in jail and that goes against everything the Republicans stand for today.

But nonetheless, this is the problem with the Republican Party. They only see their guys as heroes. They don’t see any of their faults. They refuse to admit that they have any faults and that’s why we end up with this disgusting hero worship among the right. It’s dangerous, it’s toxic, but that is how they operate. Their guys are these larger-than-life almost biblical figures and what better way to immortalize that than in this painting now sitting in the White House.