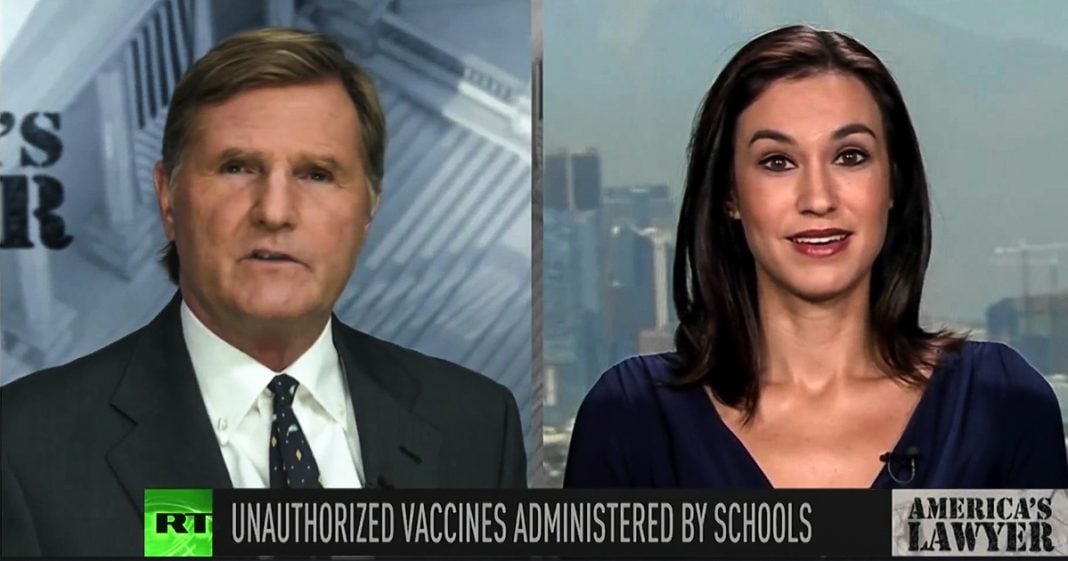 Via America’s Lawyer: Mike Papantonio is joined by Brigida Santos to discuss how a case where children in schools receive Flu Vaccinations even though parents opted out.

Mike Papantonio: A Florida school board has suspended, it’s on campus vaccination program following the reports that several students receive flu shots without parental consent. Joining me to talk about this is RT correspondent Brigida Santos. Brigida, what can you tell me about this story? Let’s begin with the facts behind the story and then just kind of kinda drill into it a little bit.

Brigida Santos: Well, several students at Jay Elementary School in Santa Rosa County reportedly received flu shots without permission from their parents. And in fact, some parents reported that the shots were actually administered outright against their wishes. A mother named April Burgess said she signed the school’s consent form, but wrote on it, quote no flu shot. She also said she purposely left the yes box unchecked where it had asked whether her child should receive the flu shot. Now, when she asked Healthy Schools Inc., which is the company that runs the on-campus program why this happened, she was told that she had consented just by simply turning in the form.

Mike Papantonio: How has the school tried to respond to parent’s complaints? That’s gonna be part of the story, isn’t it? The part of the story is there’s been parent complaints, there’s a lot of material out there about the vaccines, whether it’s accurate or not, a parent should have the right to make those kinds of decisions for their child. Of course on the other side, they say no, that’s really not fair because your child is in school with my child, and if that child has the Mumps and passes it on to my child, I’m not happy about that. What’s your response to how has school has dealt with parents on this issue?

Brigida Santos: They’ve suspended the program until they can ensure that the vaccination process meets their standards. Although it’s really unclear what exactly those standards are, because there was reportedly very little to no oversight. And, a statement from the school superintendent says Santa Rosa district schools was not involved in the planning or advancement of the flu vaccinations, nor did we administer any communication of approval with parents about the vaccines. And yet the vaccines did take place on campus. Jay Elementary is now placing the blame on the Santa Rosa health department, which sponsors the Healthy Schools student vaccination program. So it’s very odd that they didn’t seem to know what was going on here.

Mike Papantonio: No surprise there. How is the Healthy Schools Incorporated, how have they responded to the incident? As I look at the story, actually there’s more than two sides to it. But you have these sides that are looking at the vaccination issue. Now you’re hearing it tied into Autism. We’re not here to determine whether that’s accurate or not. There are plenty of people who believe it is. Plenty of people thinks it’s crazy science, but in between what we’re finding, whether or not you’re moved on either side by this, is you have the industry hard at work trying to shore up the criticism of the immunization process. And I guess Schools Incorporated is caught in the middle of it. How are they responding to the incident?

Brigida Santos: So a company spokesperson confirmed the reports and has released the following statement; “The moment we became aware there was an issue, we immediately took steps to isolate and correct the problem. All consent forms are now being quadruple checked during the data entry process before each clinic, and since we’ve added these additional measures there have been no other issues. The company is also apologize to the parents and told them that their children are at no medical risk despite having these vaccinations without permission”.

Mike Papantonio: Okay. Yeah. But it’s one thing to be told that, but there are plenty of parents … I’ve had to follow this literature very, very closely. I’ve actually been asked to get involved in litigation. I’m not there yet. I’m not at the point to where I’m going to jump into the litigation because now, the latest is that there’s a Rico case that’s been brought in Georgia and it’s kind of interesting in that it actually includes the Federal government in a lot of different ways.

And so I’m looking at this thing and I’m saying okay, is it reasonable for a parent to say, I’m not sure, therefore I don’t want to do it. And it seems that this story, if I follow this story that whether it was intentional or not, the parents been taken out of the process, that leaves the Schools Incorporated, really leave them kind of exposed. And, if this does pick up, if this Rico case for example were to prevail, and we were to see that the Federal government actually was involved in this process with the immunization industry, there could be a problem here for the people that are not at least granting the parent’s wishes if something ends up happening to the child.

Brigida Santos: Okay, so there’s no federal vaccination law, however, all states require school children to be vaccinated against certain communicable diseases.

Brigida Santos: Which usually include Measles, Mumps, Rubella, Hepatitis B and Chicken pox, but not the flu, so parents in this case have a right to be upset. A vaccination is a medical intervention and yes, vaccines do work but again, the parents should be allowed to have a say whether their child gets or doesn’t get the flu shot. And also, what if some kids already had the flu shot and then they got another flu shot. It doesn’t seem like that would be a good move either.

Mike Papantonio: Brigida, thanks a lot. Let’s follow this story some more ’cause in the end it should be the parents that have a right to make decisions like this if it’s based on any kind of inclination of science at all. Thanks for joining me.