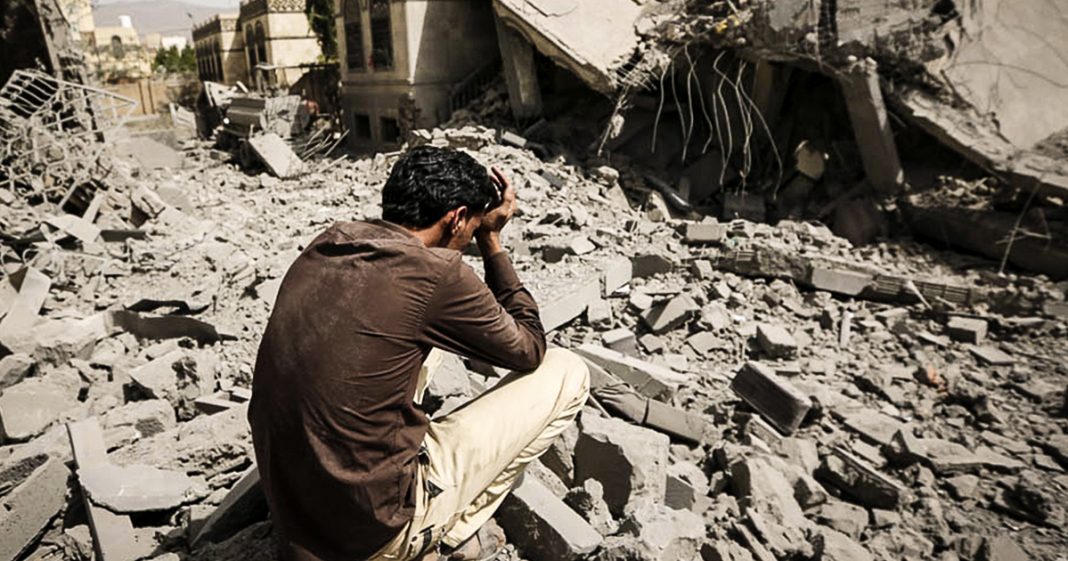 Saudi Arabia launched an airstrike recently that killed another 17 civilians after striking a bus in Yemen. The Saudis continue to laugh at international laws banning the targeting of civilians, and almost as bad, the United States is aiding them in their slaughter. We are supplying weapons and tacit support to the regime, making our cultural hands nearly as bloody as the Saudis. Ring of Fire’s Farron Cousins discusses this.

Saudi Arabia has once again launched a missile strike in Yemen that resulted in the deaths of at least 17 civilians when one of those airstrikes struck a bus carrying a group of civilians that were actually trying to flee the fighting in that particular area in Yemen.

Saudi Arabia is systemically targeting groups of civilians in Yemen and killing them for no apparent reason. Now, this is just the latest example of that. We have talked in the past and other people have talked in the past and recent weeks about all of the other strikes that Saudi Arabia has launched. They have killed children coming back from a school field trip. They have killed other groups of civilians. They are just killing civilians left and right over there.

And here in the United States, we have a president that thinks that, “Oh, none of this is a big deal. Saudi Arabia is our friend, they told me the other day they didn’t kill that journalist, so I guess I got to believe ’em.” And then later on Saudi Arabia came out and said, “Okay, well we may have accidentally tortured him to death,” is their new response now. “We accidentally tortured him to death.”

Saudi Arabia is committing war crimes right now. They’ve been committing war crimes for quite some time now, it’s just that now it’s kind of reached the level of atrociousness that the entire world is starting to pay attention. But they have been horrible for decades and the United States, no matter who the president has been, whether it’s a democrat or a republican, we have been silent. We bow down to them, we hold their hands, we kiss the rings, and we act like they are our very best friends in the entire world while they are actually one of the most ass-backwards countries on the planet with their treatment of women, with their treatment of people with different lifestyles, and with the way they commit these war crimes on a routine basis.

But we kiss up to them and we sell them weapons. We enable the slaughter that’s happening right now because they’ve got oil. And God forbid we piss off the people that hold on to the oil.

You know, this is actually just another really, really good example of why we need to kick it into overdrive and switch to renewable energy here in the United States. Because if we could kick that oil habit, if we could get other countries to do the same, if we could be the pioneers in renewable energy technology and sell it all over the planet, we would strip Saudi Arabia of any and all power that they have. We would be able to prevent these atrocities from taking place before they even happened just because we’re starving them of that oil money.

But we won’t do it. We won’t do it because we are led by a political party that doesn’t even think that climate change exists, that doesn’t think that renewable energy is a workable solution, and so we’re going to continue buying oil from these assholes over in the Middle East. They’re going to use that money to buy weapons back from us and they’re going to use those weapons to go kill whatever civilians they want to kill because they know that we, the United States and most of the rest of the world, are just going to remain silent and let them get away with it. Because otherwise they’re not going to sell us that oil next time we come begging.