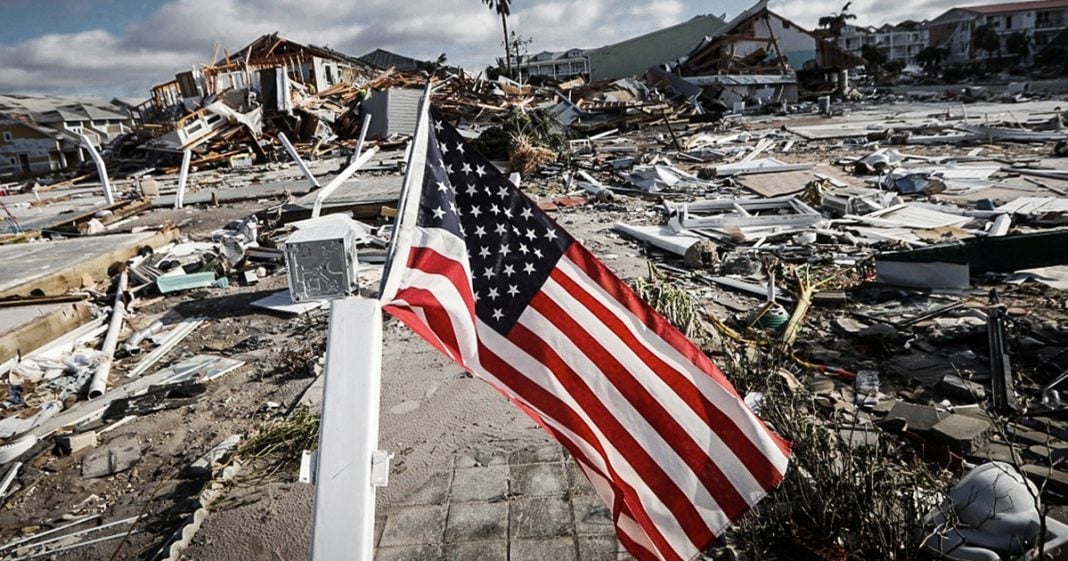 FEMA is nowhere to be found in the areas around Panama City in Florida that were ravaged by Hurricane Michael less than a week ago, showing once again just how unprepared and unprofessional the entire Trump administration is when it comes to disaster response. Locals have already given up on trying to get any kind of federal aide, and instead they are having to rely on the kindness of local charities and strangers coming to help them. Ring of Fire’s Farron Cousins discusses this.

It’s been less than a week since Hurricane Michael ravaged the Gulf Coast in the Panama City-Mexico Beach area. Thousands of people currently without electricity, without their homes, they have no idea what’s going to happen. Schools in those areas have been closed indefinitely because, basically, everything has been destroyed. I’m sure, at this point, we’ve seen the news reports, maybe you’ve seen people post on Facebook the pictures of the area. As somebody who lives very close to this area, and someone who’s been through this before I can tell you firsthand what a horrible experience it is, and tell you that these people desperately need help.

Like every other natural disaster we have seen that’s taken place during the Trump Administration they’re not getting help. Right now, what’s happening in those areas is that FEMA has, basically, been nonexistent. What we’re seeing are people coming in, average, every day American citizens volunteering, and coming down here, bringing food, water, diapers, baby formula, all kinds of stuff out of the goodness of their own hearts because the federal government’s response to Hurricane Michael has been so abysmal that they know if they don’t go down here and help these people they won’t get any help. Now, some of the victims along the Gulf Coast who were hit with this storm have admitted that. They have said, “We’re getting nothing from FEMA. If it were not for these volunteers coming from out of state, or down the road, or wherever it is we’d have nothing. We’d have no clean water, we’d have no diapers for our newborn baby, we would have nothing.”

Donald Trump rather than coming to tour this area, rather than telling FEMA to get off their asses and do something he’s been holding rallies, multiple rallies in the last few days. He held one on the very day that Hurricane Michael because he said, it would be, “unfair” to the people in Pennsylvania, I believe it was, if he canceled that rally because they were really looking forward to it. No hurricane’s going to interrupt his little rally, and his campaigns that he’s doing for all these idiots Republicans.

People are suffering. Andrew Gillum, the young, progressive, superstar in the State of Florida running for governor, he actually has suspended his campaign, he’s been out there with a chainsaw helping clear roads, and get fallen limbs, and trees out of the way, so rescue workers can come through. Ron DeSantis, his Republican challenger is not doing that. Rick Scott our current governor, who’s also running for Senate, isn’t doing that. There’s not enough people helping these people. There’s not enough people bringing in the aid that they need. FEMA’s not getting it done, the federal government’s not getting it done. They only recently let the National Guard come down here. They sent a few thousand troops. God only knows what they’re going to do because if they don’t have the supplies from FEMA they’re basically just going to stand around making it look like a police state at this point.

The Trump administration has been given multiple opportunities since being sworn in to show that they weren’t completely incompetent with responding to these natural disasters and, literally, every time, every single natural disaster we have had this administration has failed. That’s what happens when we put an idiot, like Donald Trump, who has no political experience, who has no concern for other human beings, that’s what happens when we put a guy like that in the White House. People suffer, and they’re suffering right now along the Gulf Coast, and all the areas that were just recently ravaged by Hurricane Michael.

Trump doesn’t care, the Republicans running for office here in the state of Florida don’t seem to care. The only way that these people are getting aid is because, luckily, there’s still enough American citizens out there who are concerned about other people, and they’ve donated their time, their money, and their supplies to come over here and help.