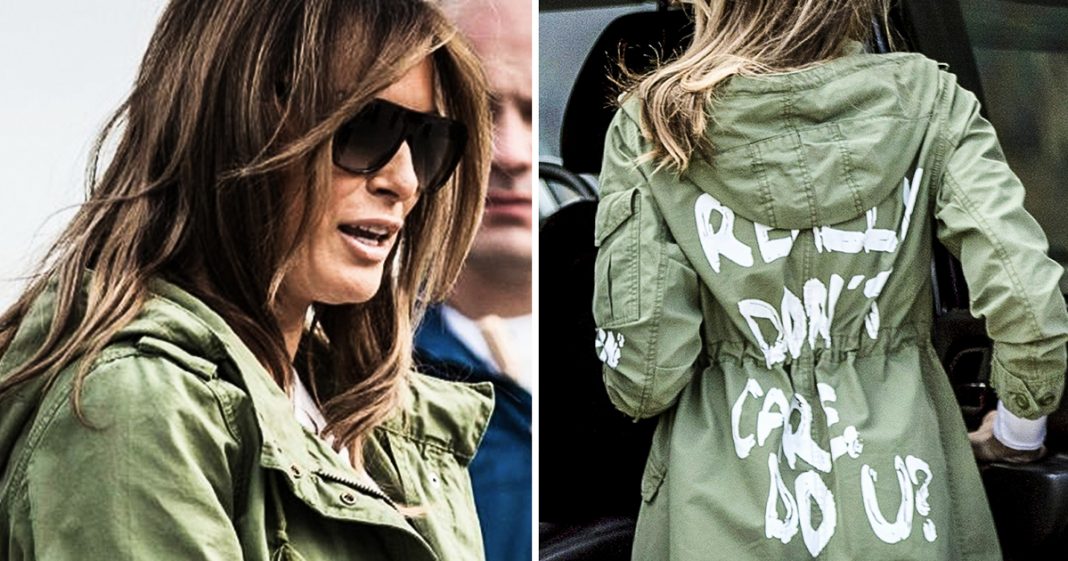 During an interview with ABC News, Melania Trump admitted that her “I Really Don’t Care, Do U?” jacket was sending a message to the so-called left-wing media. The only problem is that she chose to wear this jacket on a trip to visit detained children who were captured crossing the US border. Melania is just as bad as Donald and the rest of the family, and its time to stop acting like she’s not a horrible human being. Ring of Fire’s Farron Cousins discusses this.

During an interview that aired on ABC News last week Melania Trump finally admitted that her, “I really don’t care, do you jacket?” was, in fact, sending a message. Now, for somebody who used to be a model obviously any choice of clothing that this woman makes is meant to send a message. You know, that’s kind of how somebody who spends their life in the fashion industry operates. Everything they wear is carefully selected to send a particular message, and when you’re wearing a jacket that literally has a message on the back of it, it was pretty obvious to everyone in this country that, yeah, you were sending us a message. The only difference is that now she’s actually finally admitted it. So, yeah, now we know straight from her mouth that Melania was trying to send a message with her “I really don’t care, do you?” jacket.

But don’t worry, because she says that message was not meant for the migrant children stuck in cages that she was on her way to go visit when she wore the jacket. No, no, no the message was for the left-wing media here in the United States, and she didn’t wear the jacket when she went to go see the children because, obviously, that would just be poor taste. She just wore it getting on and off the plane so she could be photographed in it to send a message to the left-wing media that “I really don’t care, do you?”

Apparently, according to what she said in this interview, the reason she was sending the message was because everybody was talking about her marriage. You know, her husband’s cheated on her with just about every woman under the sun that he can get his hands on, and she just wanted to say, “No, no, no, no my marriage is fine. Stop talking about it. You guys are obsessed with it.” Well, yeah, when one of those affairs looks like it violated campaign finance laws with the payoff there, yeah we’re probably gonna focus on that a little bit.

But, here’s the big take away from this story. Melania Trump is a piece of crap. She is absolutely a horrible human being just like her husband, just like her step kids, and just like everyone else associated with this administration. Melania Trump is awful. You know, she is the perfect pair for Donald. She fits perfectly in with him. She helped push the birther conspiracy. She’s just as cruel and heartless and disgusting as he is. They really are a match made in heaven right there. But, I think we all need to focus on that a little bit more, and we need to stop acting like Melania is any kind of a victim of this administration, or that she’s unhappy with her marriage, absolutely not. This is a horrible human being who happens to be married to another horrible human being who, unfortunately, happens to be the president of the United States.

There should be no sympathy for Melania. There should be no, “Oh, well she’s the victim here.” No. Melania Trump knows exactly what’s she’s doing, and what she’s doing is being a complete piece of crap to everyone in this country that’s not a MAGA hat-wearing brain-dead Donald Trump supporter. If you don’t fall into those lines then Melania Trump really doesn’t care about you.