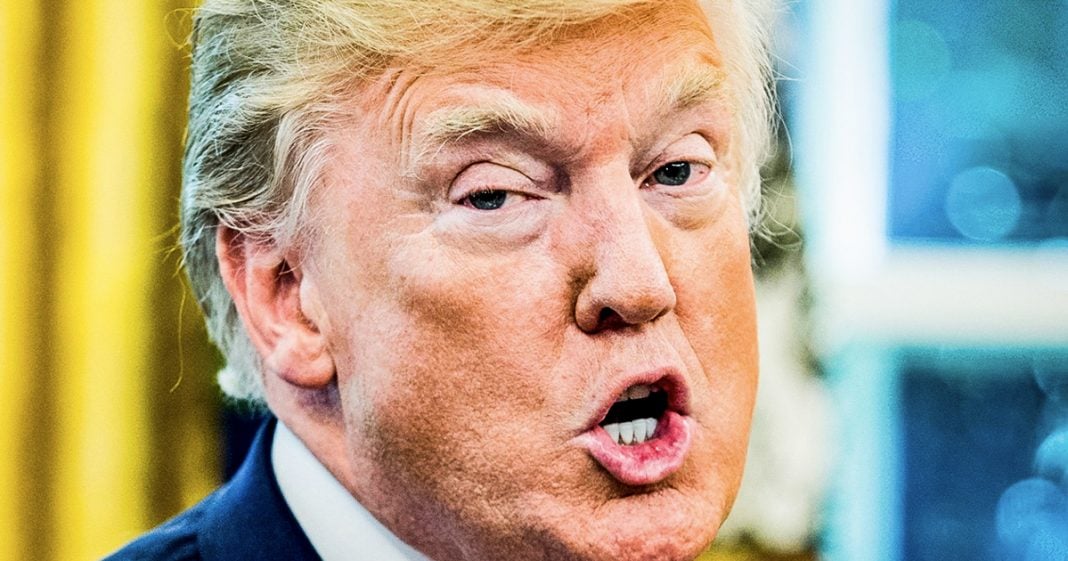 This week, the United Nations released a new report showing that we only have a few years left to act on climate change before the damage becomes permanent, but Donald Trump isn’t buying it. He told an audience this week that the climate may actually be doing “fabulous” because he’s allegedly seen reports that say this. This man is a threat to the planet and his ignorance is going to lead to disaster, as Ring of Fire’s Farron Cousins explains.

Earlier this week we got the new International Panel on Climate Change report showing that we have at best 22 years to avoid that 1.5-degree celsius global temperature increase, and if we do not avoid it within the next 22 years, the damage will become irreparable and we’re going to have to learn how to live with a warming planet and all of the climate catastrophes that come along with it.

Now, this specific report was actually based on 6000 scientific references from 91 authors across 40 countries and it actually echoes a report that came out several weeks ago from 23 different countries, hundreds of scientists who said that we have at best until 2030 to prevent this one and a half degrees celsius global warming.

The IPCC gives us an extra 10 years, but most climate scientists say if we don’t deal with it by 2030, there’s no chance of it happening and that’s when we hit the “point of no return”.

Donald Trump doesn’t believe it. Donald Trump on Tuesday, when this report was released, said he wants to know who drew it. That’s exactly what he said. He said, “I want to look at who drew it. You know, which group drew it.”

Now I don’t know if he thinks this thing was like drawn in crayon or something to make it easier for him to read, but that’s not how the actual report was. You want to know who authored it. “Authored” is the word you were looking for there, Mr. President.

But nonetheless, as you point out, 6000 scientists, okay, 91 different authors put together based on 6000 different scientific reports over the last few years. So if you want to take the time and go read all those, be my guest. I would love it if you did. But I know you’re not. You’re not even going to read this report.

Here’s the thing though. It’s not just that he said he wants to know who drew it because you can actually see the author’s name on the report. The problem is that he says the climate may in fact be doing fabulous. Yeah, this report could be wrong. Everything with climate change could actually just be fabulous right now according to the President of the United States.

And he said that because he claims to have seen reports that show that, hey, environment, the climate, everything is doing fabulous, according to Donald Trump.

There are no credible scientific peer-reviewed papers that show that the environment, the climate, the atmosphere, any of that is doing fabulous. There are zero. And the ones that do claim this, the ones that are not peer-reviewed, those are all pretty much funded by the fossil fuel industry. You’d be very, very, very, hard-pressed to find a single one of those papers that could not be traced back to fossil fuel financial influence.

We have a president of the United States today that does not believe that climate change is real. He believes that maybe it’s doing great. We just had the strongest hurricane make landfall in the United States since 1969, and it had only formed four or five days before making landfall. You know, I’m talking about Hurricane Michael down here in Florida, right where we are, right down the road basically.

That thing formed over the course of days, not even a week, and became the biggest, strongest hurricane to make landfall in the United States since 1969. It’s not like it had all that time, you know, two weeks out in the Atlantic getting stronger and stronger and stronger, this thing came up from the Yucatan Peninsula, slammed into the State of Florida in under a week. A week ago, it didn’t even exist.

So you can’t tell me that the rising temperatures in the Gulf of Mexico that allowed this storm to get so big and so strong so quickly is not a direct result of climate change.

So even if you don’t want to read the report, even if you don’t find out who drew it, if you want to see that the environment, that the climate, the atmosphere, everything, is not doing fabulously, all you have to do is turn on the weather channel for about 20 minutes. That’s going to give you a pretty good idea of just how horrible our climate has become today.