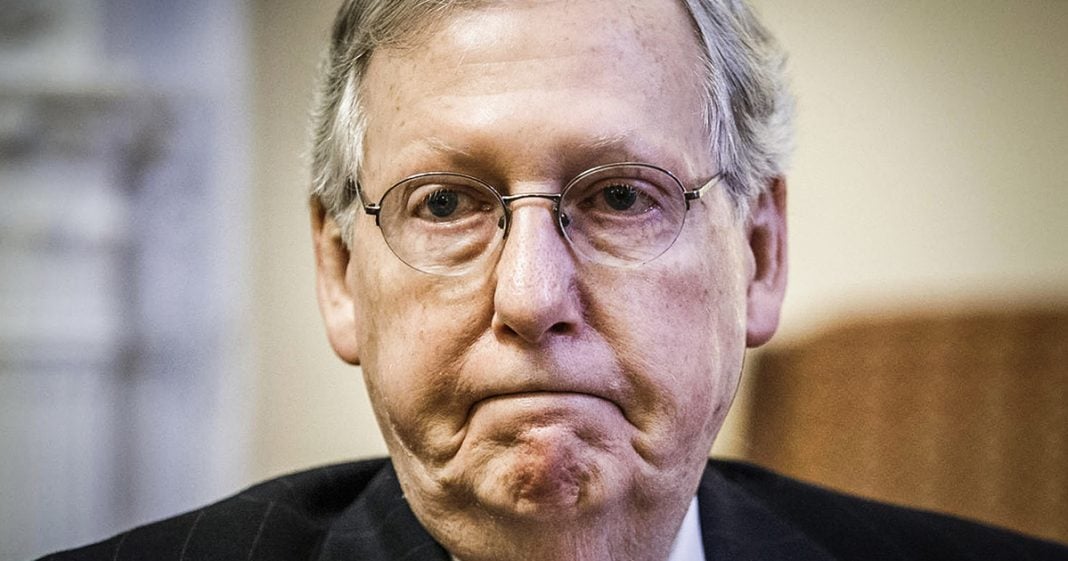 While speaking to the press this week, Mitch McConnell warned Democrats that it would not be “smart” for Democrats to investigate Trump if they take back control of Congress this year, and he strongly urged them to avoid doing so if they win the midterms. McConnell claims that it would probably help Trump, but the truth is that he’s scared it’ll show how complicit he has actually been. Ring of Fire’s Farron Cousins discusses this.

Earlier this week, while speaking with the press, Mitch McConnell said that it would be a really bad idea for Democrats to launch investigations into basically anything Donald Trump has done since becoming president, should the democrats win in this year’s midterms.

Now, McConnell said that, “They really don’t need to do that. They better not do this. We don’t want them to do this. But not because we’re worried what they’re going to find what the President. No, no, no. It’s because we’re worried about the Democratic Party. We just want to help them strategize a little better. And we republicans feel that if the democrats were to start investigating Trump, it would probably lead to Trump’s reelection, because if you sit there and harass the president and make him the bad guy, it’s only going to draw more people to support them. So, here I am, poor Mitch McConnell, and I’m just trying to look out for the Democratic Party. I don’t want them to make some serious blunders and cost themselves elections in the future. Because I’m just good guy, Mitch McConnell, who’s looking out for everybody.”

Here’s the truth. Mitch McConnell doesn’t want democrats looking into Donald Trump’s potential criminal activities and all of the horrible atrocities really committed by this administration. Not just because he knows they’re going to find stuff, but because when the democrats find something from these investigations, it’s only going to further prove that the Republican Party has been complicit in every single aspect of it. Now, we know they’ve been complicit right now. They’ve gone along with it. They haven’t said much about a lot of things. They’ve just let it happen. But suppose democrats launch investigations and we find out all kinds of things. We find out all the lies about their family separation policy. We get some good photos of the abuse taking place there. Republicans would have known about it and did nothing about it.

That’s what Mitch McConnell was afraid of. It’s not just the family separation policy or immigration, it’s everything. The FBI investigation into Brett Kavanaugh, the death of the American reporter in the Saudi consulate. There’s all kinds of things that Republicans do not want the democrats to uncover, because they’ve done a very good job of covering it all up. Mitch McConnell isn’t concerned about the future of the Democratic Party, he’s not trying to help them out. He is trying to cover his own ass right now. Because this has less to do with Donald Trump, and more to do with the republicans sitting in Congress today who know that this administration has done some horrible things. They know that they have done some things that are potentially illegal, but they have done a good job of keeping the investigators at bay.

And if the democrats come in and they’ve retaken power, those investigators are going to come storming in there, and find every piece of information that this Republican party has been trying to hide from the public for the last two years. We’re going to hear more republicans in the coming weeks saying, “Oh, Democrats, it’d be foolish for you to investigate Trump, you’re only going to help him.” But that’s not true. The American public, by large margins, wants to know the truth. They want investigations. They want to see Donald Trump’s tax returns. They want every bit of information that is out there, the good, the bad, and the ugly. Because that’s how our government operates best, when we understand who is there, why they’re there, and what exactly they are doing. The Republicans have proven that they’re not going to let us know that. So, it’s time to get those guys out of office for good.