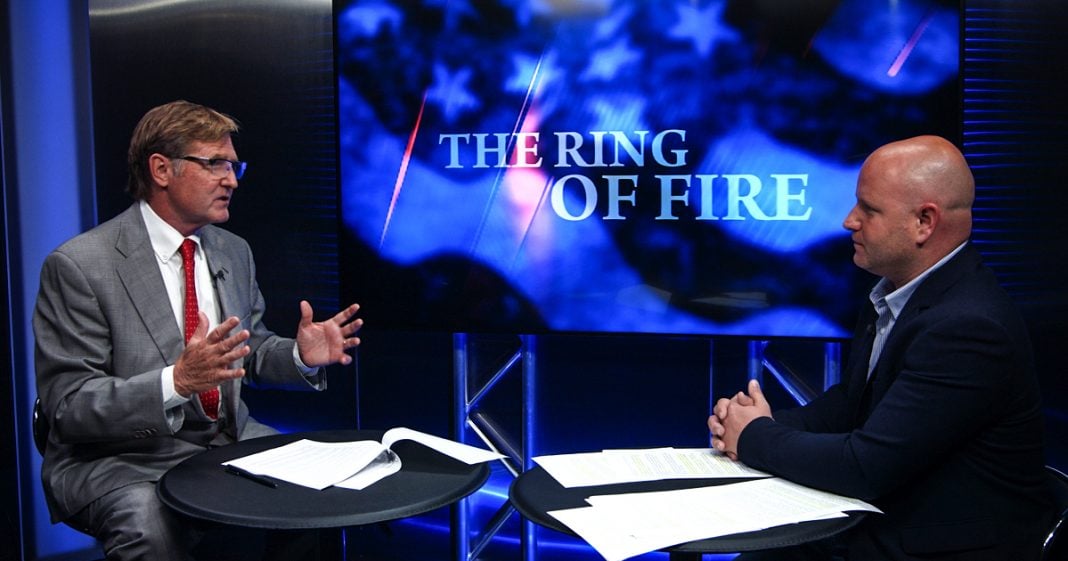 Drug maker AbbVie has been hit with a complaint, they paid illegal kick backs to doctors for prescribing their medicine. Ring of Fire’s Mike Papantonio and Farron Cousins discuss this issue.

Mike Papantonio: … crazy news just about every day. Look, drug maker AbbVie has been hit with a complaint, they alleged … they paid illegal kickbacks to doctors for prescribing their medicine. How many times have we seen this story? And every time we see this story the industry says, “oh, no, we didn’t do that.” Here’s what you find. They find doctors are sent on vacations; doctors are given actual cash advances; doctors are given free medicine to be able to hand out or to sell; doctors are given these dinners where they bring ’em in and they talk about how great their product is. And oh by the way, “Doc, would you like another drink? And how was the steak?”

Mike Papantonio: Rheumatoid arthritis, yeah. This is a repeat of that, isn’t it?

Farron Cousins: It is, you could take the name AbbVie out of the title here and replace it with Merck or Pfizer or any of the other big ones because they all do this. We had discussed a few months ago just how pervasive this problem really is in medicine and it’s almost to the point where patients need to second guess what their doctors are prescribing. I know that’s a scary thought and it’s not all doctors, but when you have so much money coming in from big pharma, even after they’ve lobbied and donated to campaigns, there’s still so much left over to hand out to these doctors just so they get the edge on the prescriptions with something like Humira cuz there’s a million different rheumatoid arthritis drugs out there. But they want Humira to be the blockbuster right now so that’s what they push.

Mike Papantonio: Let me put it into perspective, okay? I could go through virtually every major lawsuit that this firm has handled where a pharmaceutical is on the market killing people. And every time we see that this same story will be part of the story. Let’s take testosterone … okay, testosterone killing people by the dozens from stroke and heart attack. What they did with those doctors is they had junkets for ’em. There’s no other way to describe it. It might be a … the junket might be in the same city, but it’s at a resort and we’re gonna send you here to the resort to educate you about the problems of low testosterone, right?

So they get there on Friday afternoon, they leave on Sunday. In between they have three or four parties, the dinners are spectacular, the little gifts they give away are spectacular, all of the detailers come in, the detailers are the sales people working in that area and they give their little presentations and we wanna meet you a little later doctor. What we find out, yeah, that’s going on when the company knows. Absolutely the companies absolutely know in almost every case that they’re having to do that because the pharmaceutical is defective. Whether it’s testosterone that we’ve talked about, whether it is … there’s Invokana, they did the same thing with Invokana. They did the same thing with two or three different birth control pills when there was no need at all to have another birth control pills but you would have these doctor junkets where you convince the doctor … yeah, this is a great example, isn’t it? You convince the doctors that Yaz is different, Yaz is gonna clear up people’s complexion, it’s gonna help ’em lose weight … this is what they were telling the doctors.

And it was a lie. But the doctor is willing to buy into that because they’re having a good time, they’re making a little extra here, a little extra there. What’s your take?

Farron Cousins: A lot of these doctors, through no fault of their own, they don’t have time to sit there and read through every scientific journal, every new study that comes out every day. When these sales people or these executives from these pharmaceutical junkets show up and say, “have you seen the new science here cuz it shows that when men turn 40 they get really sluggish. But we’ve linked it back to low testosterone so that’s why you should be prescribing this.” “Okay, I didn’t see that.”

Mike Papantonio: I didn’t know that.

Farron Cousins: Yeah. That’s how they get ’em. It’s everything … with the Yaz, say, “well actually in our clinicals a lot of women actually lost weight so that’s something you could tell ’em too because they were really happy with it as opposed to regular birth control.” And they do it every time.

Mike Papantonio: How about this, don’t you love their use of AbbVie ambassadors. These people are ambassadors, now who are they? Ambassadors for the company are people who have accepted money to be the voice, they call ’em key opinion leaders sometimes, but these are people who take money from the company and they say, “I’ve got a doctor’s degree, I’m board certified, I’ve been at this 30 years. What would you like me to say?” And so they show up at these junkets and they give their speeches and they even use the fraudulent clinicals that are created by the pharmaceutical company. They don’t do the clinicals themselves. Many times the company even writes a piece of literature for them, they sign it as if they wrote it, and then they make the presentation to the doctors at these junkets.

The truth is yeah, we have laws to stop it, but nothing really happens without prosecuting. This is something that should be prosecuted because we understood the reason we don’t do this is because it creates bad medicine, it creates bad science, and it ends up killing people.

Farron Cousins: Right. The main reason a lot of prosecutions don’t take place with this is because big pharma … left, right, center, and everything in between has paid off the right people. They’ve got their people in the FDA, they work next door to the folks at the DOJ, they’re buddies, they’re friends and they can go and say, “Mr. Congressman, look I’m facing some kind of accusation here. Remember when I just gave you that $50,000 doesn’t that mean something to you? Wouldn’t you like another one? Can’t you do something to protect us, we’re saving lives.”

Mike Papantonio: We just did a story on North Dakota trying to pass a marijuana law, right? We established that the lobbyists come in, the pharmaceutical industry comes in, the alcohol industry comes in to stop it. If you’re in North Dakota and you wanna really see how this really works, do a search … where would you go to find that money that’s transpired between … there’s three or four.

Farron Cousins: There’s a lot of ’em, Open Secrets is one of the best one.

Mike Papantonio: Open Secrets is the best one. Find out which one of those legislators that are trying to stop marijuana in North Dakota, which one of ’em got money from the pharmaceutical industry, from the alcohol industry, or from some special interest group that wants to stop it for all the wrong reasons. It’s just how politics work today.

Farron Cousins: And MapLight also does a really great job of tracking pharmaceutical money … all money but Map Light is another great one people should use.