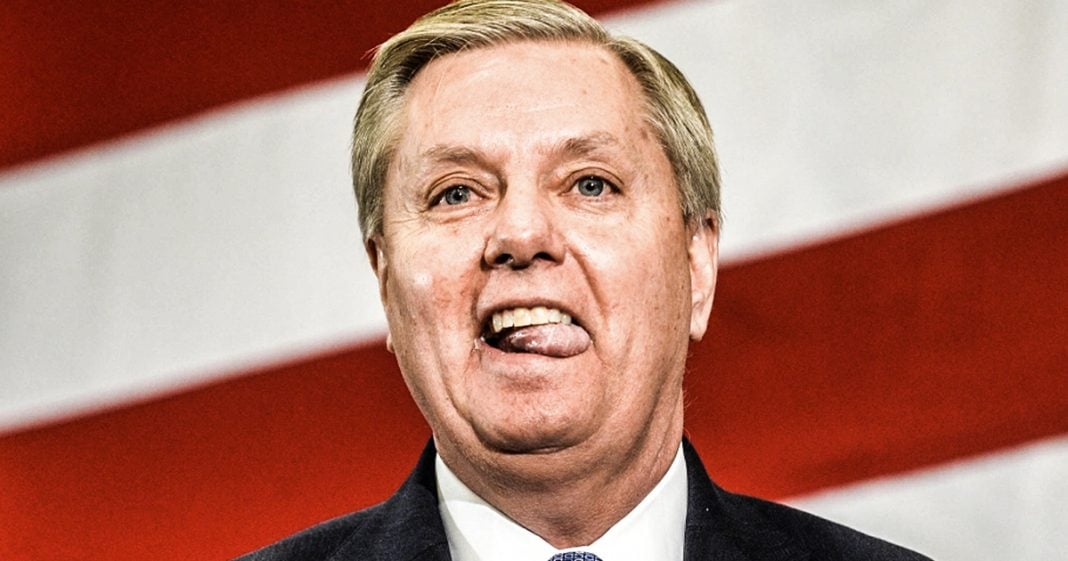 In a shocking exchange last weekend, Republican Senator Lindsey Graham said that Dr. Christine Ford’s testimony was dishonest and that the roles were likely reversed. He added that Brett Kavanaugh was the “slut whore drunk” victim of Ford. Graham has made it clear that he is going to be a puppet for Donald Trump, and whatever dignity he had died with his friend John McCain. Ring of Fire’s Farron Cousins discusses this.

Republican Senator Lindsey Graham has made it clear throughout this entire Brett Kavanaugh hearing that whatever dignity this man may have had at one point in his life was obviously buried in the ground with his buddy John McCain. I mean if you haven’t noticed ever since John McCain passed away, who yes he was a very good and close friend to Lindsey Graham, Lindsey Graham has made this horrible even further right turn to be just a puppet and a stooge of Donald Trump. Now that’s not to say that Lindsey Graham hasn’t always been horrible because he has. I mean this guy was even more of a warmonger than John McCain was, but he was always a little bit more reserved. He wasn’t quite an asshole like he is now at least in public. He was privately, he was with his legislation, and he was with his war hawkish ways, but once John McCain passed away it really allowed Lindsey Graham to just become unleashed, and we saw that on full display this past weekend.

When Graham was confronted by reporters after the Saturday confirmation vote on Brett Kavanaugh, he decided to take a few more swipes at Doctor Christine Ford by saying, “She was confused, she didn’t know what was going on, and worst of all that Brett Kavanaugh was actually the victim of Dr. Ford. Brett Kavanaugh was the victim in all of this.” In fact, here is his exact quote. “I think the roles were reversed. The slut whore drunk was Kavanaugh.” The slut whore drunk was Kavanaugh, not Dr. Ford, you know, as she wanted to say, I guess. I don’t know exactly what Lindsey Graham is trying to say here other than he doesn’t have any respect for women whatsoever, and that he’s a piece of crap that needs to be voted out of office as soon as possible. That’s what I heard with that statement. That’s how I interpreted it, and I think that’s how most of the people in this country interpreted it.

Lindsey Graham has got some really severe problems kicking around in his head right now. And I know we’ve talked a lot about the mental illness that Donald Trump may or may not have, psychologists tell us there’s definitely something there, but I think it’s time for people to start looking at Lindsey Graham’s brain. There’s something not right. There is something fundamentally wrong with the way that this man’s neurons are firing off in there if they’re firing off at all. But I wholeheartedly believe that if we got him inside of a CAT scanner we would find something not quite functioning properly inside of Lindsey Graham’s brain, and if it is functioning properly, if this is just who he is, then he is way too much of a scum bag to ever set foot in the Senate building ever again.