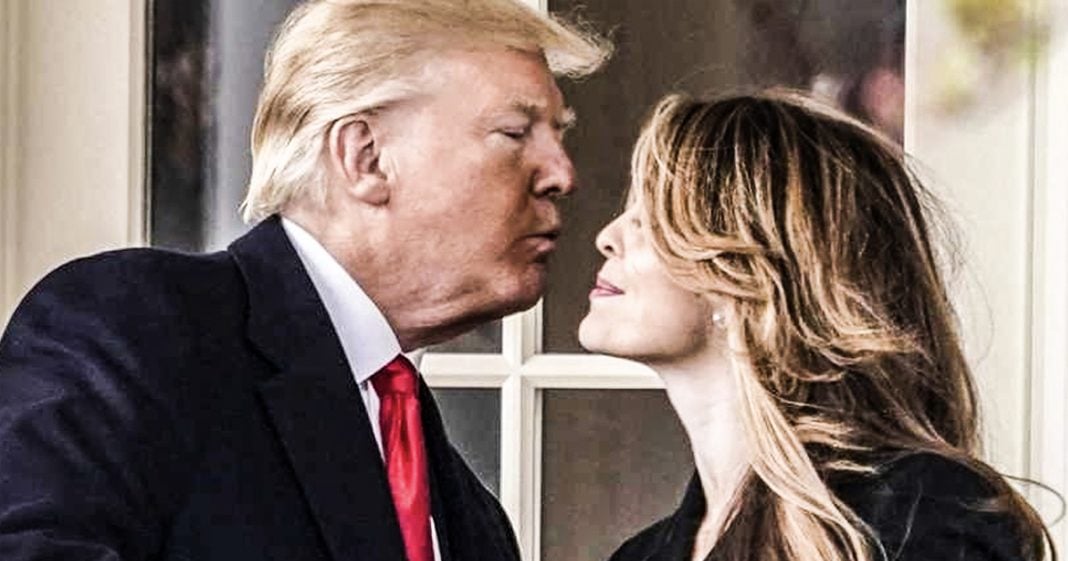 Donald Trump’s former Communications Director Hope Hicks has found a new job. And, not surprisingly, that new job happens to be as an executive at Fox News in charge of public relations and communications. The lines between Fox News and the Trump administration have not just become blurred, they have disappeared completely. Ring of Fire’s Farron Cousins discusses this.

The revolving door between the Trump administration and Fox News just keeps on spinning. Recently, it was announced that Hope Hicks, the former communications director for Donald Trump’s campaign and for Donald Trump’s businesses back in the day. She served as an assistant. She did everything from crafting talking points, to steaming pants. She is now going to be in charge of public relations for the propaganda network. Here’s what’s happening at Fox News, in case you’re not aware. Recently, there was this big buyout of Fox property, so they’re spinning off a couple of their organizations, including Fox News and Fox Business. That’s now gonna be under the Fox Header. The Fox Network TV, all their movie rights, those are gonna go to other companies. I believe Disney is the one who solidified that deal. With this newly formed Fox spinoff company that includes Fox News and Fox Business, they have hired Hope Hicks to be in charge of public relations for those two propaganda networks.

Here’s what that means. It means that this woman who is insanely close to Donal Trump, knows all of his dirty secrets, and still loves him anyway, is basically gonna be putting her personal pro-Trump anti-Democrat, anti everything not Trump spin, on everything that those networks do. To make it worse, we already have Bill Shine, who was a former Fox executive who now works where Hope Hicks used to work in the White House, so that really is kind of the biggest revolving door imaginable. “I’ll take one of your former people, you take one of my former people. We’ll just switch their positions, and nothing will change.” Maybe later on in the evening when I’m having pillow chat with Shawn Hennedy, I’ll talk to him about maybe hiring a few more of your people and you can take a few of mine, and everything will work out great. Fox News is running the country right now, folks, and that is horrible thing to have to say.

It’s something we’ve had to say several times since Trump took office, but they removed any doubt at all about who is actually running this country. I have no doubt in my mind, that Donald Trump made a few phone calls to the people of Fox News, in order to get Hope Hicks this job, and in return Donald Trump is gonna keep tweeting about how great they are, and Fox News host will keep talking about how great Donald Trump is. If you’re still a Fox News viewer, you need to take that into consideration. You need to understand that this is not a network that cares about news. They don’t care about facts. All they care about is fluffing the President, so that he continues to heap praise upon them and vice versa. This is how it works with that network. They’re not interested in the news. They just want to be as close to the White House as possible, so they can feel like they have just a little bit of power.