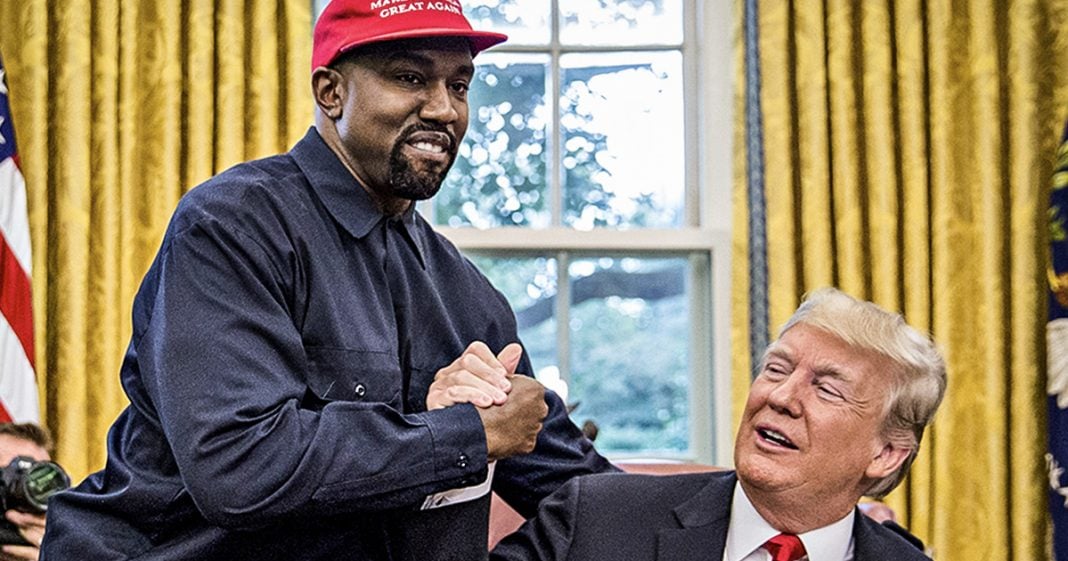 There is little doubt anymore that the White House has completely become all about ratings and photo ops, and Kanye West’s trip to DC this week proved that. Rather than discussing important issues or anything relevant, the two men sat in the Oval Office giving awkward and seemingly-forced compliments to one another. Ring of Fire’s Farron Cousins discusses this.

In what might be one of the weirdest days ever in the history of the White House itself, Kanye West and then later in the day, Kid Rock both appeared at the White House to speak with President Trump. Kid Rock was there because of the music modernization act, he wanted to be there for this signing, suppose to help musicians with copyright law and things like that. It’s actually a pretty decent thing, not too bad.

Kanye on the other hand, was there for really no apparent reason, other than to tell Donald Trump how much he loved him, and then for Donald Trump to tell Kanye how much he loves him. The whole thing was nothing more than a reality TV show crossover special, where you had The Apprentice meets Keeping Up with the Kardashians. That’s what happened in the White House yesterday. The whole thing was giant photo opt, you know, blow up Twitter for a while, get all the corporate media to pay attention to you, and nothing was really accomplished.

Now, here’s the thing. I have no problem with musicians or whoever they are, actors, athletes, speak your mind about politics. Go for it. I don’t care. That’s your right to do it. You can have an opinion. You can go to the White House, if you’re invited. Nothing wrong with that either, I mean, Nixon had Elvis come in. Obama had musicians come in. There’s nothing unique or weird about Kanye going there, other than the reason. Now, we were told that Kanye was going to go to the White House to discuss prison reform. It’s a very important issue. It’s something we need to address as a country. Instead, he kind of rambled on a little bit about stop-and-frisk, then he talked about how great the second amendment was, and then he talked about the fact that he couldn’t vote for Hilary because the slogan, “I’m with her,” didn’t make him feel enough like a man who could play catch with his son.

So, he had to vote for Trump. That’s misogyny. That is 100% misogyny, like I don’t like your slogan because it makes me feel weak and feminine, so I’m going to vote for the dude in the red hat because we can drink a beer and shot a gun, and hell yeah, brother. That’s what happened with Kanye. He also suggested that Trump replace Air Force One with a iPlane. I don’t think that’s a thing. He said that wearing the Make America Great Again hat makes him feel like superman. So, Kanye West is either still actually a five year old child, or he, like Donald Trump himself, is suffering from some kind of very severe mental illness.

I mean, let’s not forget that after Hurricane Katrina in 2005, Kanye West is the guy who basically stole the show while they’re raising money for the victims and said, “George W. Bush doesn’t care about black people.” Right? What happened to the Kanye of ’05? Who is this person sitting in the White House, verbally fellating Donald Trump with all of these nonsensical praises? It was utter insanity, but that is exactly both of the men in that room wanted, or both of the little boys in that room wanted, I think is a more accurate statement.

Donald Trump wanted some headlines, and some publicity, and more followers on Twitter. Kanye West, the same thing. Had the two met and actually discussed issues the entire time, and come up with a game plan to work on things like prison reform, or stop-and-frisk, that would have been great. Nothing wrong with that. Instead, this was a love fest between the two most narcissistic human beings alive in the United States today, where they couldn’t stop praising how great the other was. Nothing was accomplished, other than both of them got the attention, and the ratings that they live for.