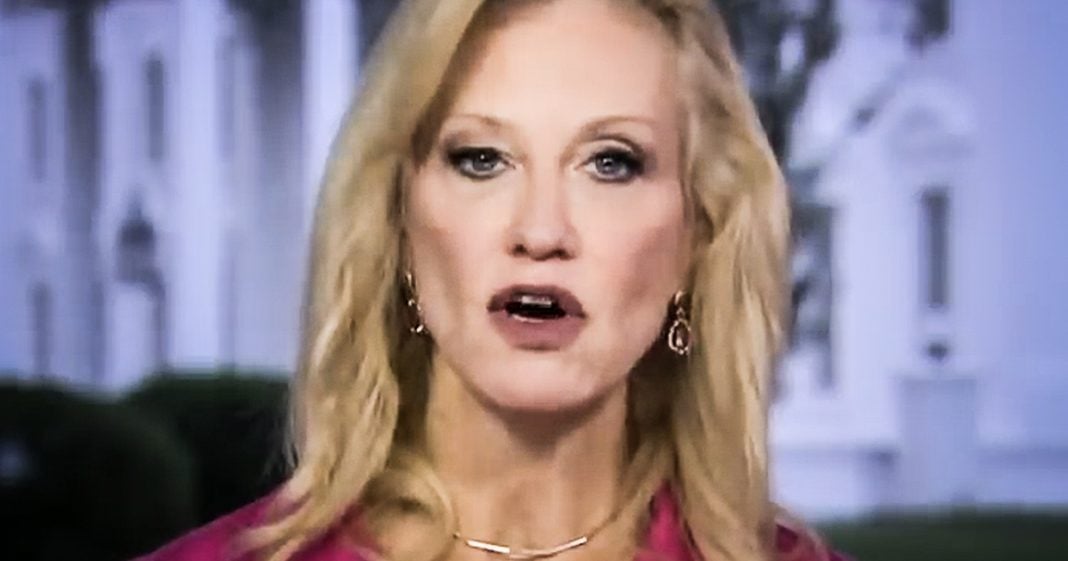 The Trump administration is apparently immune to irony, and Kellyanne Conway showcased her and her boss’s complete inability to acknowledge reality during an appearance on Fox News this week where she called for “civility” while at the same time insulting and attacking Hillary Clinton. Trump is the least civil person in this country, and Kellyanne isn’t too far behind him, as Ring of Fire’s Farron Cousins explains.

Earlier this week, Kellyanne Conway decided to go on Fox News and talk about the biggest issue of the day. It’s not the fact that her boss put a accused sexual assaulter on the Supreme Court. No. It was civility and the lack thereof from the Democratic Party. Take a look.

Kellyanne C.: Did you see some of these people? They’ve been marinating in a toxic brew of ranker and bitterness for quite a while. Maybe the shock of the polls, but I think we’re going to be surprised again at the people who support the President’s agenda who show up at the polls as well.

Ainsley Earhardt: Well, they’re mad, because their candidate didn’t win, and that was Hillary Clinton. Many people are saying, “Let’s be civil.” “Let’s get along.” “Let’s unify.” Hillary Clinton, she’s agreeing with the Maxine Waters of the world, it appears. Listen to this next soundbite. She’s saying civility is not an option.

Hillary C.: You cannot be civil with a political party that wants to destroy what you stand for, what you care about. That’s why I believe, if we are fortunate enough to win back the House and/or the Senate, that’s when civility can start again.

Steve Doocy: Well, what does that mean exactly, Kellyanne?

Kellyanne C.: Look, usually when she opens her mouth, respectfully, she offends at least one half of the country, and she did it again. It think her discourse now is a little bit dangerous. I don’t like the implications there. It’s one thing to call us deplorable, irredeemable, laugh at people who don’t have all the privileges that she has had with her ivy league law degree and through her marriage to a much more popular man who actually was a two-term president that she’s never be. I don’t like that kind of talk and I avoid it. My boss has called for civility. He’s said that he represents all Americans. We don’t run around asking people what their party affiliation is when he’s cutting their taxes and allowing their small businesses to be free of regulations and growth. We’re impervious to that.

Now listen, we know that everybody in the Trump White House is immune to reality. They don’t think it exists. They’re immune to irony. It flies way over their heads. Kellyanne, I’ve got to point out the fact that you’re talking about Hillary Clinton needing to be civil while you’re literally insulting her. You’re personally attacking her while saying we need to be civil. Do you not see how that works?

Look, there’ve been plenty of people out there who’ve done a great job of pointing out all of the times that Donald Trump has not been civil, all of the personal insults that he has lobbed at people. Mika Brzezinski, Maxine Waters, both of them, according to Donald Trump, are low IQ individuals. MSNBC’s Chuck Todd is sleepy eyes, Chuck Todd. He once during a rally said that he would pay the legal fees if they beat the hell out of the anti-Donald Trump protestors who were there. Donald Trump is the least civil human being, not just to ever serve in the White House, but probably the least civil human being alive in the United States today, and Kellyanne Conway is a very close second.

She has defended of the more grotesque things that the president has said. She defended when he called the press the enemy of the people, and then said that they need to apologize for them. If you’re looking for more of those instances where Donald Trump and Kellyanne Conway haven’t been civil, even though they’re allegedly calling for civility now, you can check out the link the video description here, because there’s a good list of all those times.

Here’s the thing. Hillary Clinton is actually right about this. It is not a time to be civil. We tried civility. It didn’t work. We tried rational arguments with these people. They refused to listen. They refused to accept reality as reality. It’s time to fight back, and I’m not talking about with fists, or weapons, or anything like that. I’m talking about with protests, with our words, with our policies, with everything, with our vote. Don’t engage in arguments with these people on the right. Nothing good is going to come of that.

Yeah, sure, there’s probably some folks out there who lean to the right whose minds you may be able to change. But, those kinds of people are few and far between right now. I’m talking about the hardcore Fox News viewer, Ben Shapiro watching, Charlie Kirk loving, Tomi Lahren crushing, people out there. You don’t have conversations with them. You don’t engage with them. You don’t associate with them, because you’re not going to do anything to change their minds. You don’t go down to their level if you don’t have to, but if you do, sometimes you have to.

Politicians, right now, do need to be civil. I understand that, but they also need to fight a little bit. For the rest of this country, the time for civility is over. Look at what’s happening. We have children being locked in cages along our southern border. We have gross climate catastrophes taking place at the same time that this administration is rolling back every environmental protection they can get their hands on. We have, not one now, but two, men accused of sexual assault sitting on the highest court of the land completely undermining their legitimacy. Things are bad, and things are getting worse.

No, it’s not the time to be civil. It’s not the time to wring our hands. Now is the time to get angry and fight back. Do not let these bullies and these cowards walk all over us anymore. If you see them out to eat at a restaurant, you can go confront them and say, “Why do you support this policy?” You could do it without laying a hand on somebody, without committing any kind of assault. That is absolutely not necessary, and it’s not called for, and it’s not condonable. There is no reason to let these people have a minute’s worth of peace until they answer for all the disgusting policies and actions that they have done for at least the last two years. Civility is dead, and it’s about time too.