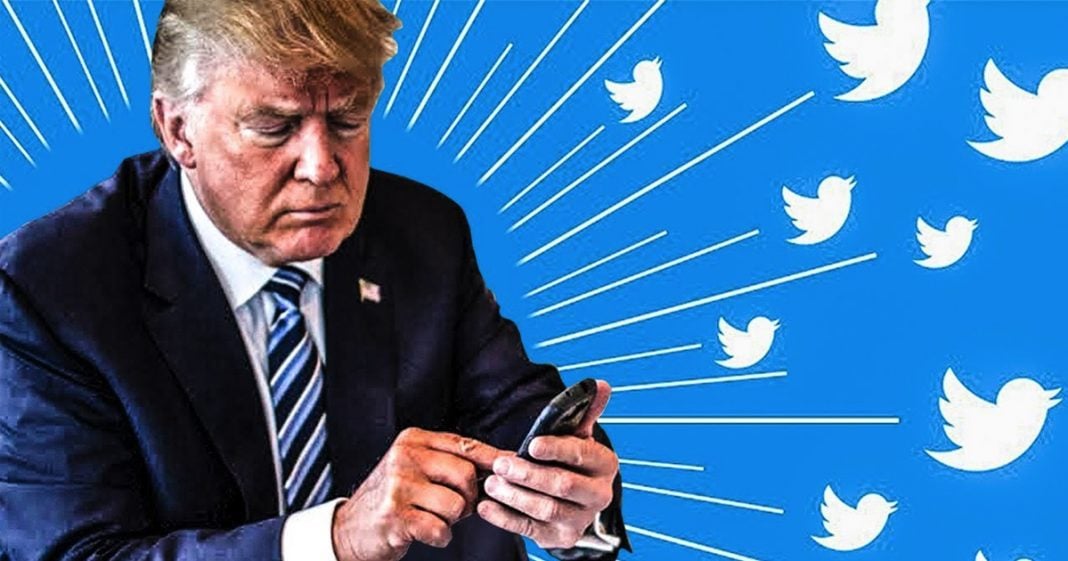 Our final question tonight comes from Roger Sampson. Roger Sampson asks, “Do you think this is an odd way to defend himself that his dumb lawyer got him to do? In other words, stuff trump admits in public domain on twitter then becomes inadmissible in court?” Ring of Fire’s Farron Cousins discuss this issue.

Our final question tonight comes from Roger Sampson. Roger Sampson asks, “Do you think this is an odd way to defend himself that his dumb lawyer got him to do? In other words, stuff trump admits in public domain on twitter then becomes inadmissible in court?”

Now, Roger Sampson, this was actually in response to conversations we had been having, several people have been having on Twitter, talking about Donald Trump’s tweets and the things he accidentally admits in tweets, whether or not that is part of his legal strategy then trying to argue that these cannot be admissible in court. They 100 percent can. Donald Trump’s tweets are public record. They are official Presidential statements according to the court rulings. That’s why he’s not allowed to block people on Twitter.

I don’t think if it is their legal strategy that it’s a very good one, but more importantly all of these tweets are being given attention by the special prosecutor’s office. We know that because people who have already had to testify or answer questions with him have said that they’ve specifically been asked questions about tweets that the President has sent out. Any time Trump goes on there, and says something stupid, and accidentally admits to, I don’t know, obstruction of justice, that is 100 percent admissible. It’s not just actually because he’s the President.

To give a little bit more back story on this, and to kind of issue a warning to anyone out there who wants to say something crazy on Twitter, courts have ruled that something that you say on social media is absolutely admissible in courts, and further more it is a legitimate reason that employers can use to fire you. If an employer does not like what you say on social media, even if it has nothing to do with the company, nothing to do with your job, you can still be fired for it. If you say something horribly offensive, they can fire you. If they’re just looking for some kind of reason to get rid of you, and they go through, oh, this guy was out partying on a Tuesday night. They could unfortunately do that.

The laws in this country have become kind of so stretched that employers don’t really have to have a viable reason to get rid of you. Some states, like where I am state of Florida, you’re allowed to fire somebody without reason, without cause. You don’t have to tell them why. You can just walk up and say, “You’re fired”. Can I ask why? You can, but I don’t have to tell you. Bye.

Employees in this country have very few protections at all. Tweets, Facebook posts, anything on social media happens to be one of those new ways that employers are using that submitting it if they have to in court if an employee files a lawsuit against wrongful termination, which is why these things have been upheld. I tell you that just to say that yes, our tweets can be held against us in the court of law. Donald Trump’s tweets, which now are considered legally protected, hell yeah, those can be used against him in a court of law or in an investigation or anything like that.

This is one of those times when luckily the President is held to the same standard as the rest of the public, so everything that man has put on his Twitter feed is absolutely something that I believe is of interest to Robert Muller, and based on people who have already talked to Muller, he is 100 percent paying very close attention to the President’s Twitter feed.

Now, that’s all the questions we have for today, but again, if you have a question you want us to answer on the show, send it using the hashtag “Ask ROF”. Send it to me directly at Farron balanced or send it to the show at Ring of Fire Radio.