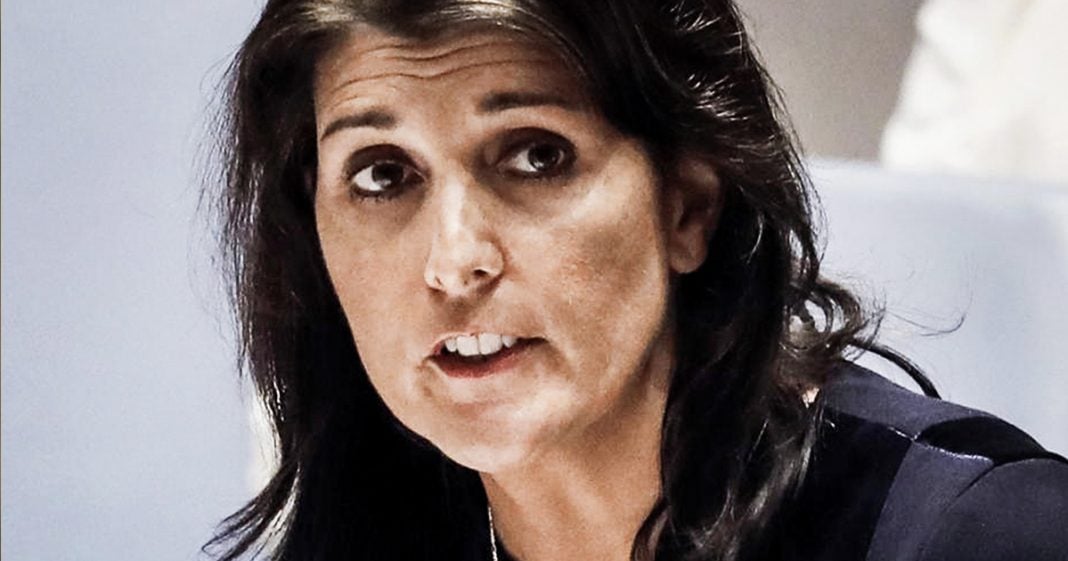 The reason why Donald Trump’s UN Ambassador Nikki Haley abruptly resigned this week just became a little clearer, as new reports indicate that she was the beneficiary of multiple kickbacks from wealthy Republican donors. If these stories and the lawsuits around them are fruitful, it could put an end to any future political ambitions that Haley was harboring. Ring of Fire’s Farron Cousins discusses this.

Earlier this week, on Tuesday, Nikki Haley, Donald Trump’s Ambassador to the United Nations, resigned abruptly, leaving people wondering just what the heck actually happened here. Nikki Haley wasn’t the target of any major investigation, she had remained relatively scandal-free throughout her entire tenure, and even though she disagreed with the president quite often, they were still pretty much on the same page most of the time. So, it was a bit of a shock when Nikki Haley just suddenly decided to resign, and as we mentioned at the time, give it a couple of days and the truth will come out and we’ll find out why she actually resigned. And, we now have that information.

As it turns out, on Monday of this week, the day before Nikki Haley resigned, the group Citizens for Responsibility and Ethics in Washington, CREW, filed a complaint against Nikki Haley alleging that she had been the recipient of multiple gifts from major Republican donors, that she actually did disclose on her financial forms, but that were also highly illegal. Here’s what happened according to the CREW complaint.

Nikki Haley has listed seven different gifts on her financial forms, in the form of private jet flights back to her home in the Carolinas. Now, the people operating and paying for these flights, just happen to be major donors of Nikki Haley’s former gubernatorial campaign. So, while she claims that these were gifts from her friends, the truth is, these were major Republican donors trying to buy some influence with Nikki Haley and that is why this is a problem, and this is most likely why this woman had to resign her post.

What strikes me as odd about this, is not the fact that Nikki Haley was doing some dirty dealing under the table, that was 100% expected. What strikes me as surprising, is the fact that there’s nobody, past, present and most likely future, within the Trump administration that can’t just keep themselves out of trouble. You know, even when you look back at the corruption of the Bush administration, at least there were a few people in there, as evil as they were, they were still playing by the rules at points. Here in the Trump administration there is nobody you can point to, to say that, “Nope, this person has not broken a rule, they haven’t had any ethics violations, they’re not currently under investigation.” I mean, all the department heads that he’s appointed, all the agency heads that he’s appointed, everyone associated with this administration has been proven to be corrupt as hell. And to be honest, that speaks a lot to Donald Trump doesn’t it? Because we’re judged by the company we keep.

When you look at all the agency and department heads that are under investigation or having to resign because of scandals, and then you look at all of his personal friends, his buddies, his former campaign manager. You got Manafort, Gates, Flynn, Cohen, all those guys going down, all the people he’s appointed going down, doesn’t that kind of paint a portrait of a guy who himself is most likely doing some dirty deeds? Otherwise, this is one hell of a coincidence, and Donald Trump just happens to be the worst judge of character in the history of humanity. My guess, is that Trump is obviously just as corrupt as all of these people he’s surrounded himself with, it’s just that the hammer has not come down on him … yet.