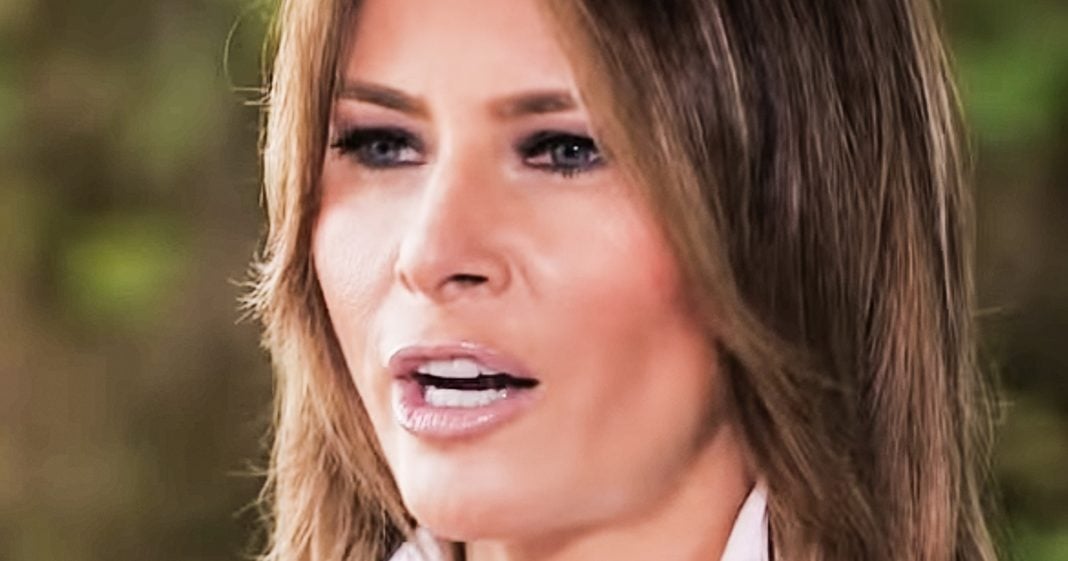 During an interview with ABC News this week, First Lady Melania Trump complained that she is probably the most bullied person in the world today. Unless she’s talking about bullying towards her from her husband, her claims make absolutely no sense at all. Ring of Fire’s Farron Cousins explains how Melania, just like Donald Trump, loves to play the victim even though reality shows us that this isn’t the case.

Here’s the thing, Melania. I understand people do make fun of you, they’ve made fun of your outfits. But at the same time, you’ve sent very clear messages with your outfits like, “I don’t really care,” when you were going to visit those children that your husband has been locking in cages. You literally wore a jacket that said, “I don’t really care. Do U?” Yeah. That’s going to send a message and that’s going to piss people off. That’s not bullying. That’s calling it what it is.

Secondly, maybe you’re referring to bullying that you’re getting at home because we all know that your husband is a major bully. He bullies everybody. He insults their appearance, he insults their intelligence, even though he, himself, is both a hideous monster and one of the dumbest people to ever walk into the White House, but he thinks it okay for him to insult other people for the same thing. Maybe he’s the one bullying you back home. If you need help, there are places that you can call, there are people that you can call, to get the help that you need if that is what is actually happening here. I don’t think you were trying to send us any kind of coded message that maybe your home life is a little bit abusive, both mentally and whatever, but nonetheless, you need to knock it off. You’re doing the same thing that your husband does, which is trying to play the victim when, in reality, you’re the one out there trying to make other people feel small and feel like crap.

Michelle Obama was attacked relentlessly by Conservatives during her eight years in the White House to a level that you will never, ever see. She was attacked by them for wearing a sleeveless dress. They constantly, and still do today, you can find it on social media, on all these right wing websites, where they refer to Michelle Obama as formerly a man, comparing her to a monkey. They got pissed off because she wanted Americans, God forbid, to eat a little healthier. They attacked her for months over that. So, yeah, I think Michelle Obama had it a little bit worse than you do, Melania.

Not to mention the fact, again, and I want to hammer this because this is what’s happening, this is a woman who has been privileged most of her life because of her good looks. Then she was privileged because she happened to marry a disgusting billionaire. She is a birther as well. She pushed the conspiracy theory that Barack Obama was not born in the United States. She has zero room to say that she is the most bullied person on the world when she, herself, has engaged in plenty of bullying, she has stood by her husband as he does it, and now both of them, Melania and Donald, want to act like they’re the real victims here. Nothing could be further from the truth. What we’ve learned about Melania since she came into the White House is that she is just as disgusting, just as despicable, and just as corrupt as her husband is.