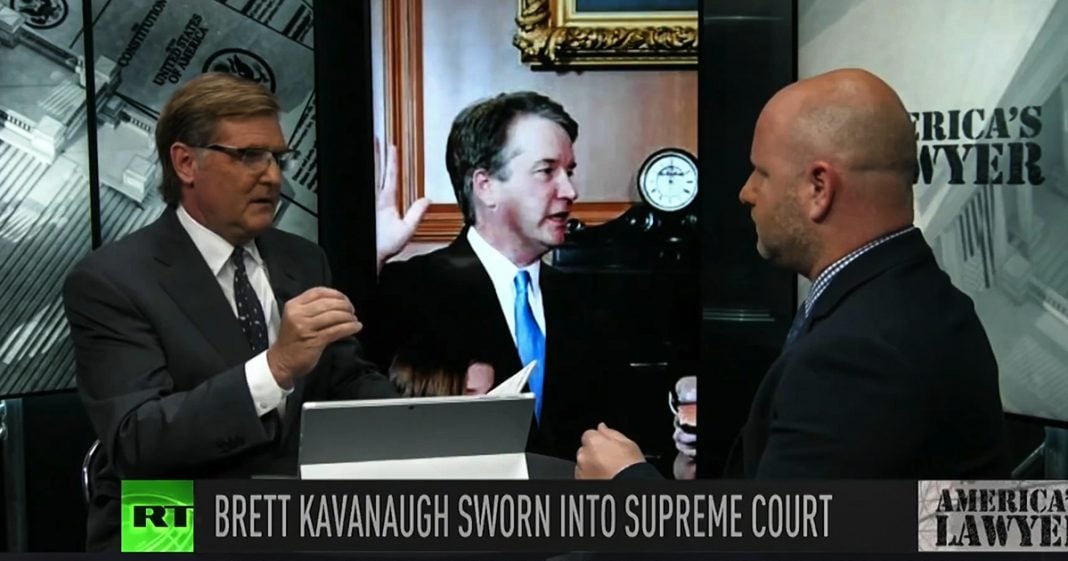 Mike Papantonio: The entire nomination process for Brett Kavanaugh became a media meltdown. The accusations against him, the anger on both the right and the left, all of it made for a great TV circus that the corporate media was happy to cover all day long because it meant more advertising. But now that the drama is over, we’re left with a Supreme Court that leans solidly to the right, and that’s very bad news for American consumers. Joining me to talk about that and other stories of the week is Farron Cousins, Editor of the Trial Lawyer Magazine.

Farron, as soon as this story started, we both talked about the same thing, and that is will the Democrats get it right this time. And what we talked about, and I think you did a good story on this, was Patrick Leahy in 2004 and in 2006, when Kavanaugh was … They had hearings. They’re asking him the tough questions, so he could get the position as an appellate court judge, right?

Mike Papantonio: But they asked him the right questions. They didn’t go for the low-hanging fruit. They actually talked about substance that affected American consumers. What is your take on how this played itself out?

Farron Cousins: Well, back in ’04 and ’06, Leahy and some of the other Democrats, their big focus was didn’t you receive all of these stolen emails from the Democrats on the Judiciary Committee. You sent them out. We’ve got your name on some of these emails where you’re talking about it, yet you’ve told us … And Leahy brought it up again during these hearings. But it got so bad that Kavanaugh back then, his nomination stalled. Bush had to nominate him a second time.

Mike Papantonio: Let me make it a little clearer. He lied. He committed perjury during the hearings because the RNC had given him the questions that he was going to be asked by the committee. You can do that sometimes. You can get them ready. But he was asked by the committee, “Were you given the questions?” And he lied about it. Okay, but what happened here was that the same nut jobs that have been in charge of the DNC now for about 15 years, they chose to take the main path, being this story that, don’t get me wrong, was an important story. But it’s like trying a case; you lead with your strength. You had a man who lied to the committee, committed perjury with the committee. And instead of going with that strength and let Leahy do what he was trying to do … Leahy was signaling. He we signaling during the hearing, “Look, you idiots. Yes, this other story is important. But we don’t have enough to tie it up. We don’t have enough to bring it home. Here, you had a judge committing perjury, and what more did you need.”

Farron Cousins: Right. Leahy was trying to tell them in the early days of this new 2018 nomination back at the beginning, he was trying to say, “Look, we’ve got this guy cold. We’ve got the perjury here. I have the evidence. We have this.” And the Democrats could have ran with that. They thought that they had a winning issue with the sexual assault. Now, the problem with that, as you know all too well, unfortunately you could not really ever prove one way or the other. Do I believe Dr. Christine Ford? 100%. There’s no question about that. Unfortunately-

Mike Papantonio: But you can’t bring it home.

Mike Papantonio: And that’s what people were … Look, it is … The DNC right now is a matter of Home Alone. Cory Booker is not the guy. Maxine Waters is not the person. These people that are trying to assume leadership, they just are not leadership. Schumer and Pelosi, that’s not leadership. Right now, if you were to say, “Who’s in charge of making decisions like this? This should have been a policy decision. Where do we begin?” Instead, Feinstein pulls this out at the last. They could have beat this guy to death with being a liar, which he is. But instead … Okay, so now, here’s what we have. Now, we’re confronted with a Justice who no question is going to affect abortion rights, affirmative action, environmental protection issues, immigration issues, and religion, all because there’s no leadership in the Dem- Were you moved by any one of the Senators asking questions of this man, of Kavanaugh during the hearing? It was a joke. Cory Booker was a joke. It was a meltdown joke.

Farron Cousins: Look, I agree with you. I think Leahy from day one, he knew where he wanted to go. Nobody would follow him. And then you have Tom Perez with the DNC, the leader allegedly of the Democratic party, saying, “Listen. Yeah, Joe Manchin broke ranks again. We’re not going to punish him.” Meanwhile, the Republicans, Lisa Murkowski, who didn’t vote no, she just voted present.

Farron Cousins: They’re already talking about punishing her because she wouldn’t fall in line with the party.

Farron Cousins: And while I’m glad she didn’t vote yes, at the same time, you do have to come up with the leadership. You have to have the people say, “Listen. We are a united front here in the Senate. You know this guy is going to be horrible for American consumers. You know that there’s a great chance he committed these atrocities.”

Mike Papantonio: Okay. So now we have … Not to say Anthony Kennedy was ever a swing vote. That’s a joke.

Mike Papantonio: But the idiots that talk about Anthony Kennedy and swing … I mean, it’s a joke.

Farron Cousins: It was like 80% of the time corporate.

Mike Papantonio: So now, what we’re going to have, I promise you where it comes to … I mean, I can go down the list. I’m looking at issues that are before the Supreme Court right now. The environment, huge issues. Consumers, huge issues. Consumers are going to lose. Environment is going to lose. Workers, huge issues before the Supreme Court right now. Investors that are scamming mom and pop, they’re going to lose. Those are things they should have talked to Kavanaugh about before they went down this trail, low-hanging fruit. Again, this was an important part of the attack, but it wasn’t the lead. And the lead was, “This is a guy we already caught lying one time. And by golly, we caught him again. And now what are we going to do about it?”

Leahy did not get his way. We’re going to suffer more on net neutrality. We’re going to suffer on toxic emission cases, air pollution cases. It goes on forever because we don’t have leadership in the DNC. I swear to God, it is like Home Alone. It is like Home Alone with … I don’t even know. Honestly, I don’t even know who’s going to get out front. Right now, you got Trump going state to state kicking them around. And so you got Trump out there state to state doing that. Who’s going to be out there? Hillary Clinton? They’re going to send Hillary and Bill out this time. You watch. It is a train wreck, and nobody will talk about it.

Farron Cousins: Exactly. But listen, you talk that they led with the wrong thing was important, yes. But you could have beaten up Kavanaugh up enough with the perjury claims, with the email evidence that Leahy had in his hand at the hearing. And then once you’ve got him weakened, once you’ve got him on the ropes, you got Republicans on the run, then you bring in Dr. Ford. You bring in everybody- Dr. Ramirez, excuse me.