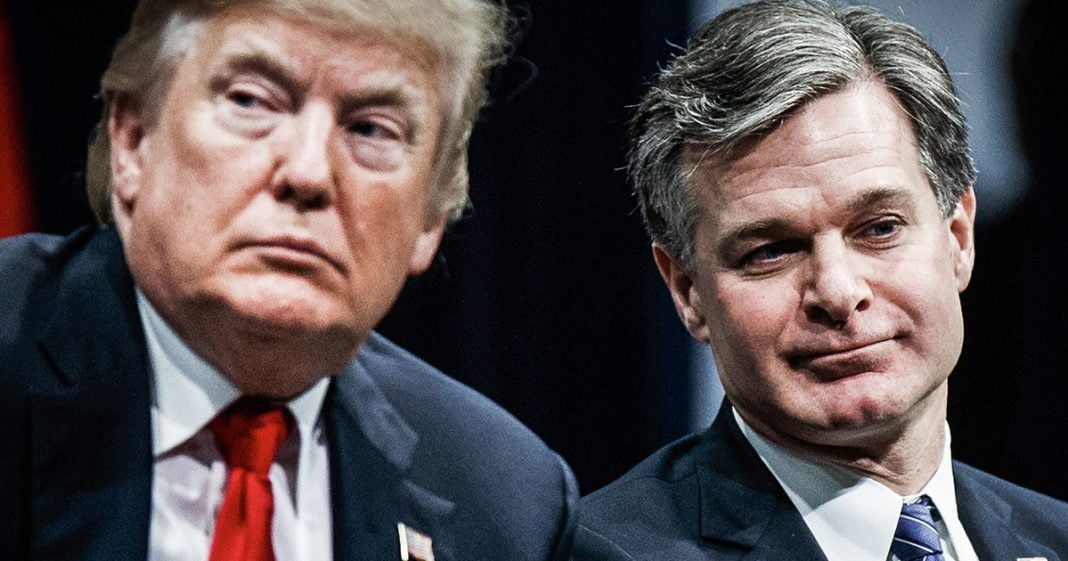 During testimony in the Senate on Wednesday of this week FBI Director Christopher Wray confirmed to the Senate under the penalty of perjury that the White House did in fact hinder the investigation into Brett Kavanaugh. Christopher Wray, director of the FBI confirmed that Donald Trump did in fact hamstring this investigation and did not allow them to do certain things, to talk to certain people and to basically carry out an uninfluenced, unbiased investigation to see if Brett Kavanaugh was in fact the monster that multiple women have claimed him to be.

The reason this matters, obviously, one we know that this investigation was a complete farce. Two, the White House had come out a few days after the investigation was announced, after all the news broke that they were not allowing them to do certain things. They said, “No, no, no. We’re not interfering at all. We have not told them anything. We’re not doing any of that.” So now we know that the White House was absolutely lying about those claims. Number three, we know that Brett Kavanaugh is not fit to be serving on any court in this country, let alone the US Supreme Court.

This investigation was basically over before it even started. They didn’t talk to the victims, they didn’t talk to the witnesses, they didn’t talk to anyone that could have given them any information that could have proven that Kavanaugh was lying about his past. Because they didn’t want to. The White House didn’t want to do that. They couldn’t take such a major loss ahead of the midterms because that would have inevitably caused the blue wave to become a blue tsunami in likely both the House and the Senate. So they bury the investigation, they tie their hands, they do not let them do what they have to do. We end up with Brett Kavanaugh in the US Supreme Court.

But don’t worry because Christopher Wray says, “No, no, no, no. I mean, we were still able to carry out a pretty decent investigation. You know, this is kind of common because judicial investigations are a little bit different than a real FBI investigation.” That’s a lie. That’s an absolute lie.

Silver lining though, folks. Because now that we know, because Wray told us in the Senate, it’s on record now. Now that we know that this investigation was a farce, that they were not allowed to do everything they were supposed to do that leaves the door open for an investigation later on down the road. Now it may have to happen once Donald Trump gets out of office, it may be able to happen if the Democrats can take back the House and the Senate. But the bottom line is that eventually it is going to happen.

So Brett Kavanaugh can smile and smirk and shake hands with his newfound buddies on the Supreme Court all he wants. The fact of the matter is with all of the evidence mounting up against him, with all of the evidence that these investigations were completely fake it’s unlikely that that man is going to be sitting on the US Supreme Court for the rest of his life. Two, three years tops is my best guess. Based on some of the other investigations going on there is a good possibility this man may not even be on the Supreme Court by the end of this year.