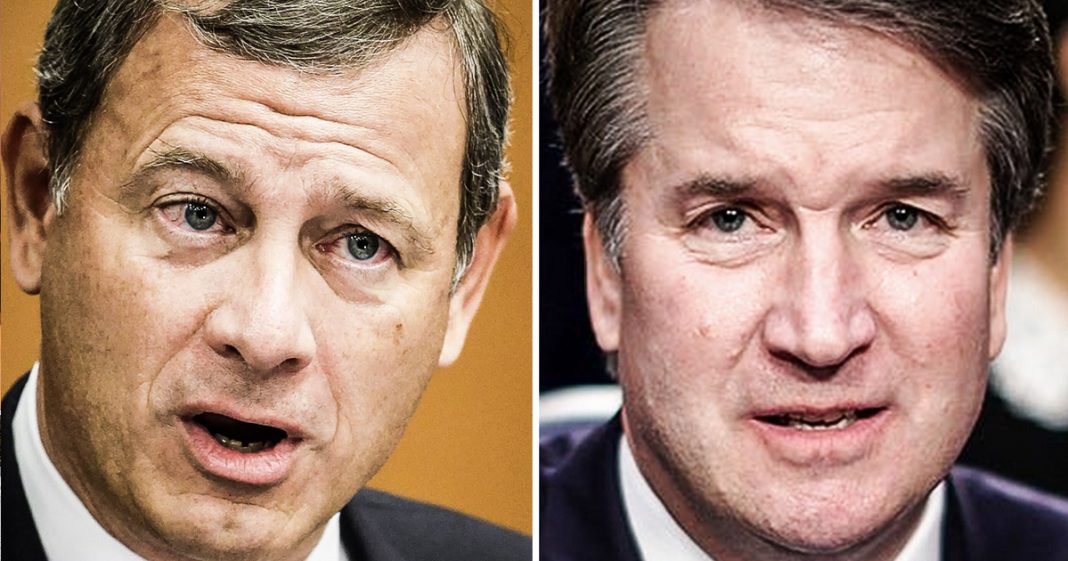 The Chief Justice of the US Supreme Court John Roberts has now referred Brett Kavanaugh for investigation. This news comes after the story broke that Roberts had been sitting on complaints forwarded to him by the lower court for several weeks, refusing to act on them. If these investigations are thorough enough, we may not have to wait for Democrats to regain control of Congress to get Kavanaugh off the bench. Ring of Fire’s Farron Cousins discusses this.

Just because Brett Kavanaugh is now sitting on the U.S. Supreme Court, he passed his Senate confirmation, that doesn’t actually mean that the guy is out of the woods yet. In fact, on Wednesday of this week, Supreme Court Chief Justice John Roberts forwarded more than a dozen complaints of judicial misconduct against Kavanaugh to a Colorado court of appeals for them to investigate. Now, the reason Roberts even did this was because he had been sitting on those complaints, which came from the D.C. Circuit where Kavanaugh was previously sitting. He had been sitting on them for weeks.

You had Judge Karen Henderson, who is an appointee of George H.W. Bush, George Bush, Sr, sitting on that bench. She had compiled this list of judicial misconduct complaints against Brett Kavanaugh, and sent them to John Roberts, and said, “Hey, here are some things that need to be investigated about this guy, but we can’t do it, obviously, because he sits on this bench. We’re a little too close to him, so we need you to figure out who can investigate these claims and go from there.” Roberts did nothing. He did not make these judicial misconduct complaints public. He just sat on them until this week, once the story broke that he actually had them.

Now, most of these complaints are actually related to things that Brett Kavanaugh said during his Senate testimonies, which means the court where he was sitting saw his testimony, realized that he was making statements that were most likely false, and they believed that that should probably be something they should look into, because perjury is actually a pretty big deal. Now, we know, based on these complaints, based on the fact-checkers who looked at his speech, there were no fewer than nine false statements given by Brett Kavanaugh during his Senate testimony.

We have to remember that perjury is perjury. It doesn’t matter if he’s lying about something small, like, “Oh, no, I’ve never had a beer in my life,” or something large, like, “No, I didn’t kill that guy. No, not at all.” Perjury is perjury, no matter how big or small the lie actually is. Some of the things that Kavanaugh lied about, obviously kind of minor, most of them having to do about his drinking, but there’s also some pretty serious lies in there, like the ones about not having any idea or any involvement in the stolen email scandal from Democratic senators in 2004. He was directly involved in that. His name is in the emails. He knew what he was getting. He knew that they were stolen, and he lied to the Senate about it.

John Roberts did the right thing, but he only did the right thing because the public pressure on him was growing too great. Let’s hope that this Colorado court out there that’s going to be investigating these, let’s hope that they can conduct a thorough yet quick investigation so that maybe we can get Kavanaugh off this court before he’s ever able to issue his first real opinion on the Supreme Court.