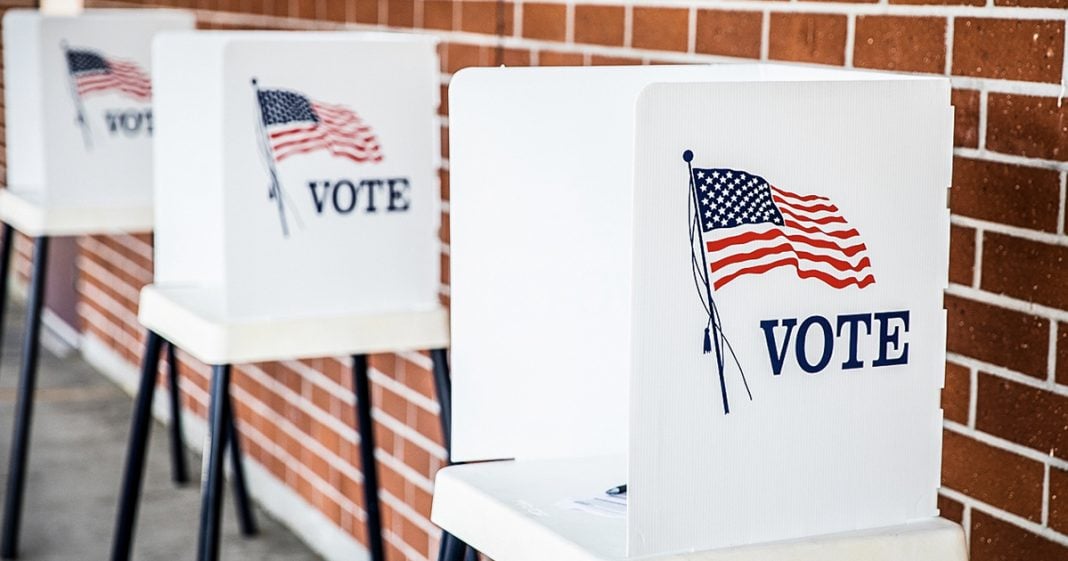 Republicans understand that they are headed for a major voter smackdown in November, and that’s why they are hoping that purging as many voters as possible from the voting rolls could stem the tide of the blue wave. And with a greenlight several years ago from the Supreme Court, that is exactly what’s happening all over the country today. Ring of Fire’s Farron Cousins discusses this.

You know, let’s be perfectly honest; Republicans are facing a massive uphill battle in this year’s midterm elections. It’s likely that they’re gonna lose the House of Representatives, it’s possible if not probable that they could also lose their majority in the Senate, if only by one or two seats, and they’re kind of freaking out right now. But while they’re freaking out and they’re freaking out behind closed doors, they’ve admitted they’re probably gonna lose about 65 to 69 seats in the House of Representatives, there are at least some conservative groups out there doing everything they can to make sure Republicans retain their majorities, or that if they lose, they don’t lose by very much. And those groups are doing it by trying to help the Republican party cheat in this year’s midterms.

One of the groups out there doing this is the Public Interest Legal Foundation, PILF, which is a perfect name for what this group is doing. They’re trying to publish the list of so-called “illegal alien” voters in states in the United States. Specifically, they’ve kind of singled out Virginia. They have taken the state slogan, “Virginia is for lovers,” and changed it to, “Virginia is for aliens” in one of their latest reports, where they go on to list the names and personal information of all of these alleged “illegal immigrate voters” in the state of Virginia.

There’s just one problem: Those people aren’t actually illegal aliens. In fact, some of them, at least one of them, happen to work for the Immigration Enforcement Offices. And yet that didn’t stop this group from basically going through a directory of who lived in the area, finding any name that looked Hispanic, putting it on their list, lying to people and saying, “Look how bad this is. Look at all of these illegal aliens who are voting in this state.”

The Trump administration, when they first came into office and Trump made these stupid claims that three to five million illegal aliens voted in 2016, so they had to launch this voter fraud commission to go out there and find them all. They didn’t find any, by the way, because in-person voter fraud is one of the rarest things here in the United States. You’re more likely to win the Powerball while being struck by lightning than run into a person fraudulently voting, but Republicans need that boogeyman; they need that false person out there illegally voting all the time in order to pass their restrictive voting laws. They know it’s based on fault premise, but if they can get those laws passed, they can keep more minorities from making it to the polls. They can put their photo ID laws into effect, they can make it harder for these people to get to the polls, they can shut down polling places because a few years ago the Supreme Court, by gutting key parts of the Civil Rights Act, they pretty much gave them the green light to do this.

And so that’s where groups like PILF come in. They’re out there spreading what they know are lies in order to shift the public opinion enough to where they’re willing to vote in favor of Republicans who say we’ve got to do something about this problem. PILF knows the problem is completely fabricated, Republican politicians know the problem is completely fabricated; they’re just hoping that some of the voters around this country are stupid enough to believe their propaganda so that they’ll begin signing away their rights, specifically their right to cast a ballot at a US election.

That’s what Republicans do best. If you can’t win on the issues, which they certainly can’t, why not just cheat to win? And that’s their plan for the midterms.