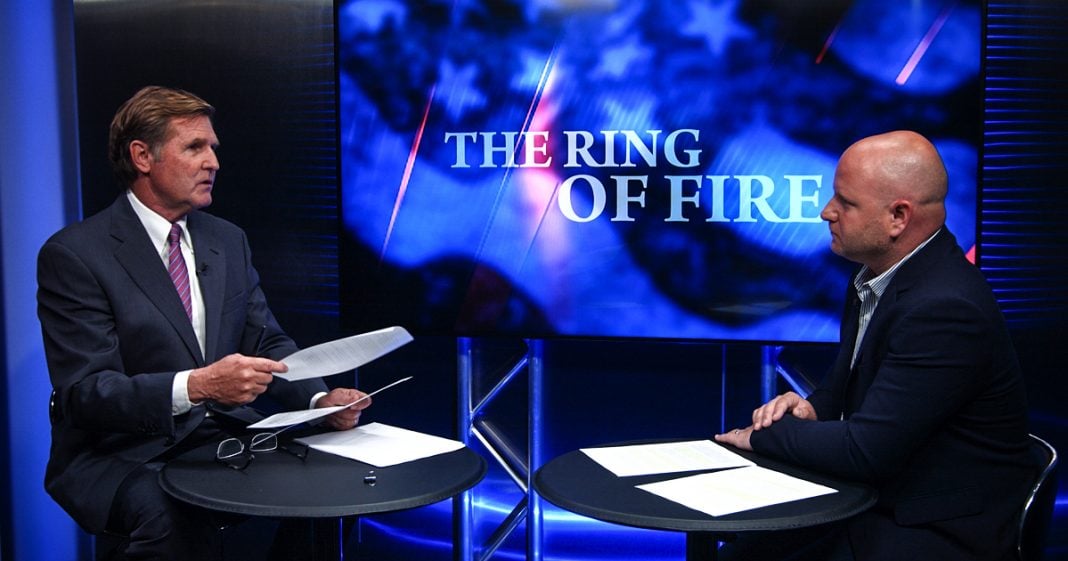 A new lawsuit claims that one of the most profitable forms of hernia mesh is 100% incompatible with human tissue, causing irreparable harm to consumers. Ring of Fire’s Mike Papantonio and Farron Cousins discuss this issue.

Mike Papantonio: The stories we cover are stories that you can’t find in corporate media. If you find it, you’ll find the edge of it … never the back story. I tell this story very often, because it’s an important story, is, as you know, I did MSNBC. I did CNN as a contributor. I’ve done FOX NEWS, my God, I used to be the only liberal on FOX NEWS.

Now, I’ve moved to RT America, because it’s really one of the only places I can tell these stories, because there aren’t advertisers calling in, saying, “Take that cat off the air, because he’s talking about our corporation. And, oh, by the way, if you don’t, then, we’re gonna pull our advertising dollars.” I just can’t even tell you the number of times it happened … just where these cases, I think of YAZ, of what it took for us to get people, their attention, on YAZ, which was a birth control pill that was killing women by the hundreds. DVTs and well … the point is this, the point is we have to tell these stories somewhere.

You boneheads that are writing, “Oh my God, Pap and Farron are on RT America.” Really? That’s … read the stories. Follow the stories. Don’t give me that blow back, because Putin is telling us to tell bad stories in America. You’re a dunce. If you’re sending stuff to us like that, you’re absolutely out in left field.

Look, a new lawsuit claims, that one of the most profitable forms of mesh is 100% incompatible with human tissue, causing irreparable harm to consumers. Okay? This is a case that we’ve known about a long time. The first time we saw this case, in a really ugly way, was when women were getting implants to help with incontinence. They would put mesh implants for female incontinence. They were vaginal implants.

The injuries that they were causing were deplorable. If you ever sometimes go online, find a site where you actually see the damage. It was described by a doctor, who had to remove these things, he said, “It was like removing concrete from rebar. It would take so much human tissue, that the result was a life of agony for the women.” Now, we have this hernia mesh, that’s being used for all types of processes. I mean, typically a hernia is where you see it, but it’s being used for, really, all types of process. Talk about this a little bit, by the way.

Farron Cousins: This is really interested, because now, the lawsuits with this hernia mesh, the defects that the company was well aware of, they’re finally getting under way. One of the experts in this, is the one who said that, “This is 100% not compatible with human tissue.”

Farron Cousins: Now, this is a product that is-

Mike Papantonio: Say that again, because this is a product being put in the human body-

Mike Papantonio: … the studies are showing, “Look, you need to know the stuff you’re putting in the human body is not compatible with human tissue.”

Farron Cousins: Your body is going to treat it as a foreign body, almost. What happens with that … which is how some tumors form … your body starts to envelop it, because it believes it’s a foreign tissue. It creates new tissue over it, preventing the hernia mesh from even being able to do what it was supposed to do, in the first place. That’s if you’re lucky.

If you’re unlucky, which most people who’ve had this, filing the suits have been, the hernia mesh breaks apart. It starts perforating the other organs. It can migrate. It is because of the tissue adhesion, is nearly impossible to pull out of the body.

Mike Papantonio: Okay. Let me tease this out just a little bit more. Why do we … okay. We have here, we have PerFix, P-E-R-F-I-X, mesh, 3DMax mesh, Ventralex ST mesh, Composite mesh. These are the names of the companies making this stuff. I think, when they do this edit, you need to put them up somewhere so people can see these.

Mike Papantonio: You take human tissue with it, because as you point out, the mesh merges with major organ systems. Sometimes they’ll shut down entire organ systems. This is a case that should’ve been preventable. It was preventable, but the FDA didn’t do their job.

Look, and by the way, what we found in the vaginal mesh was that some of the people in the FDA that approved that, went to work for the industry after they approved it. This is the same thing. We’re gonna find with this case, that the FDA has this revolving door. You say what we want you to say while you’re with the FDA, and there’s a big job waiting for you when you get out.

Farron Cousins: Well, you know, here’s that thing, too. This applies to this hernia mesh story, just as well as it does to any of the other ones … I know we’re short on time, but it’s the fact that, yes, the company acted in bad faith. Yes, the FDA screwed up. The third part … we’ve hit on this, but I’ve never heard anybody else talk about this … the hospitals being taken over by corporations-

Farron Cousins: … and that’s why you get things like hernia mesh, ’cause what it is, is it comes in a little kit. It’s this nice, neat little thing, that you give to the surgeon, so that they can do hernia repair surgeries-

Farron Cousins: … faster. Get people in. Get them out. Turn and burn, basically, is what how they describe it. You could do as many as you can in a day, instead of taking the time, going in there with sutures, stitching it up-

Mike Papantonio: It’s worse than that. It’s actually worse than that. What we found with vaginal mesh, was they were taking doctors who had no training. There are doctors who can do these types of repairs, ’cause they’ve been trained … they’re surgeons, there certified surgeons, that have an understanding how to do this. But, the hospital corporation said “No. We just want the kits. We want all our doctors to be able to do it, ’cause when we do that, we make a lot of money. We see this all the time, with these types of medical devices. All the time.

Got about 25 seconds. Let me just ask you this. Does this ever change? Do you see this getting better, at all?

Farron Cousins: As long as we’re in this horribly greed driven, profit driven healthcare system, this is what we’ve got. The last line of defense is the court system, with the plaintiff’s lawyers going there fighting for us.