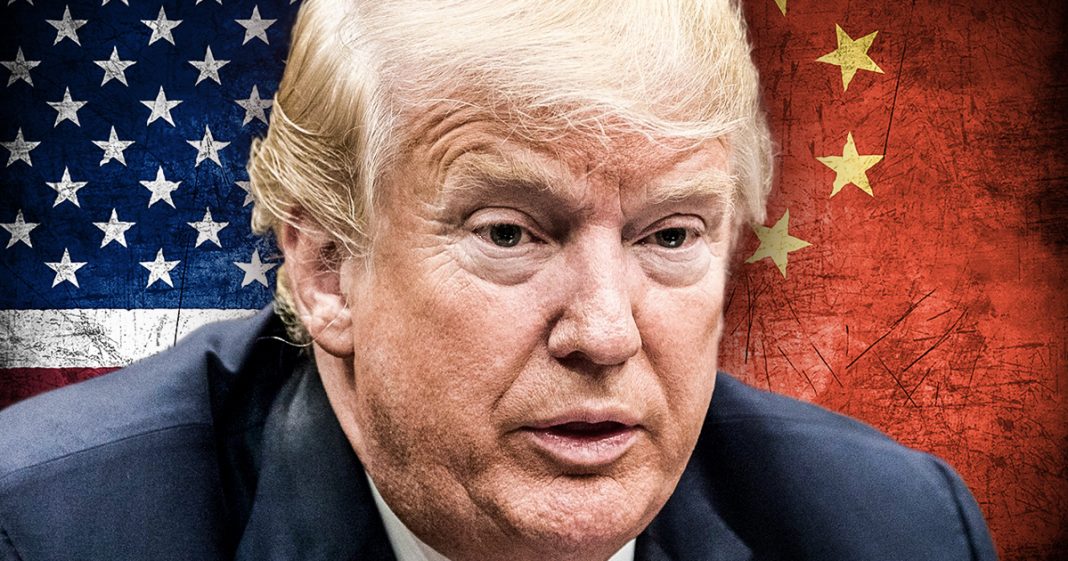 Economists have warned that Donald Trump’s trade wars, especially with China, are going to be a major thorn in the side for America’s middle class, and they will be the ones that end up paying the costs of the price increases that come along with Trump’s tariffs. In spite of this, Trump has pledged to press on and do as much damage as possible to the economy and the under classes. Ring of Fire’s Farron Cousins discusses this.

Donald Trump continues to escalate his trade wars, especially with China. Now, they’re not the only country we’re currently trade warring with, but they are Donald Trump’s biggest targets. He has imposed more tariffs on Chinese goods than any other countries, and like clockwork, every single time he puts a new tariff on them they slap one on US goods, because, hey, they can afford it, too.

Here’s the problem, and this is something that economists in the US are starting to warn us about, the people who are actually paying the price tag for Donald Trump’s trade wars are middle class consumers. The majority of the goods that the Trump Administration has slapped these tariffs on, which could be as much as $20 to $40 billion per year, are middle class spenders. You know, think about it, they’re not putting massive tariffs on yachts, or, you know, granite countertops for new mansions. No, it’s consumer goods. Refrigerators, air conditioners, toys, things like that, construction equipment. You know, those are the things that average American citizens, you know, actually regardless of your income level, those are things we have to purchase.

Now, it doesn’t affect the wealthy elite. I mean the top one percent, if they have to $100 to $200 dollars more for a refrigerator, that doesn’t matter to them, it doesn’t affect them. They go about their daily lives, they don’t even notice that they’ve spent that, because they got a million dollars sitting in the bank. Meanwhile, the average consumer, who’s living paycheck to paycheck, hoping to have maybe $20 or $30 left in their bank account by the time that next paycheck hits, they can’t afford those price increases. I mean, I’ve been in that position, I’m still in that position, to be perfectly honest with you, to where a price increase on a major purchase already, of $100 to $200 can immediately price it out of that person’s range, for the middle class and the underclass.

And I know a lot of people watching this are in that same boat. You know, there’s a big difference between going down to the appliance store and spending $800 on a new refrigerator, which is already painful, and spending $1000 on a new refrigerator. You know, buying that new TV for $400 instead of buying it for $700. But those are the kinds of price increases that we will see, some areas of the country are already seeing them, under Donald Trump’s trade wars. And he can do that because people like him and all of his buddies in his cabinet, they’re all multi-millionaires, some multi-billionaires, they don’t notice it. It doesn’t matter to them. This is a trade war, like so many other things Trump has done, that was started out of vanity. He picked a fight with China during his presidential campaign, he escalated it now that he’s become president, and he doesn’t know how to end it because he doesn’t even know what he’s doing.

So let me give him some very, very clear advice about what he’s doing. You’re screwing over the middle class Mr. President. You’re screwing over the underclass. Your wealthy friends, your family, you don’t notice these price increases. To you they are minuscule. You even had members of your administration, Wilbur Ross, Commerce Secretary, come out recently and tell us that, eh, they’re not really gonna notice, it’s not that bad. Well guess what? We’ve noticed. It hurts, it’s affecting consumer spending, and if it continues it’s going to send your economy into a death spiral that nothing you do is gonna be able to stop.