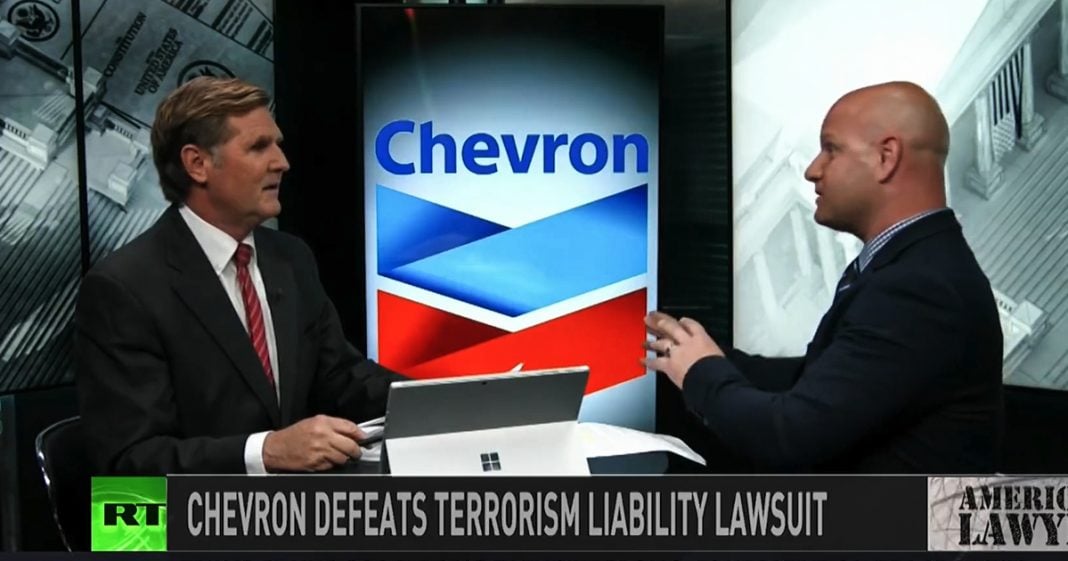 Via America’s Lawyer: Chevron was recently handed a major victory in court when a judge ruled that they weren’t liable for helping fund terrorist attacks in the Middle East. Mike Papantonio is joined by Farron Cousins to discuss.

Mike Papantonio: Moving on, the Chevron corporation was recently handed a major victory in court when a judge ruled that they weren’t liable for helping to fund terrorist attacks in the Middle East. This judge … I looked at this. It’s phenomenal. You can almost tell what a judge is going to do based on what their background is.

We looked at this judge. There’s no surprises here. This is a judge that, oh, by the way, represented Saudi Arabia, represented Dubai. And all of a sudden, that judge understands, he’s not really being a judge here, he’s being a politician. Another thing that didn’t surprise me, he was appointed by Obama. Obama had this tendency to appoint these corporate types that loved Wall Street, loved big corporations, and hated consumers where it came to cases like this. What’s your take?

Farron Cousins: This is an absolutely disgusting story. And you’re right about the judge. He came from a law firm. They brag about specializing in Saudi law, Abu Dhabi financial … All kinds of stuff over there in the Middle East. That’s where this guy cut his teeth. It’s where he was working when Obama appointed him.

Farron Cousins: Now, in this specific case, with Chevron, we know, this is not questionable, they put $20 million into a slush fund in the Middle East for Saddam Hussein in exchange for buying 78 million barrels of underpriced oil between 2000 and 2002.

Okay. The slush fund, that money was used to fund terrorist attacks and suicide bombers throughout the Middle East. Even the judge says, “Okay, well, yeah, we know the slush fund was used for that, but-”

Mike Papantonio: You can’t prove it.

Farron Cousins: “Can you prove that the dollar that they spent on this bomb came from the dollars Chevron put in?”

Mike Papantonio: Okay. Now, let me talk to you just a second. This judge is either a total bonehead … I don’t think he’s a bonehead. I mean, he may be just an absolute bonehead, or this is a political move, that it’s a holdover.

Now, if you remember, Obama hated JASTA. JASTA was where American citizens were given the right to sue the Saudis, okay? Obama comes out and he says, “That’s a bad idea. Now everybody’s going to sue us,” which was a total lie. We’re not being sued because of JASTA. But this guy, this Judge Donato, yeah, his name is Donato. You need to look him up, so you can see that this, it speaks for itself. This guy’s history speaks for itself.

Donato comes in and he basically puts in place the Obama policy, which is, we can’t sue where there’s foreign nationals involved. There’s no question that this was a jury question. This wasn’t a judge question. This should have been put in front of a jury. The jury should be asked the question, “Did the claimants show enough information to show that Chevron money that was used illegal for criminal activity ended up in the hands of the terrorists, and that that ended up in terrorist activity?” This is a judge deciding what a jury should decide.

My hope is … He’s in the Ninth Circuit, out in California. They’re going to look at it and they’re going to say, “Yes, you really are either a bonehead, or you are so political that we’re nauseated by the politics.” What’s your take?

Farron Cousins: Well, look, 328 people were involved in this lawsuit. This was a massive suit against Chevron. We know they paid the money to Saddam Hussein. We know they got oil in exchange. And we know the money went to fund terrorist activities. So, yeah, the judge should not have said anything in this, and said, “All right, ladies and gentlemen of the jury, you’ve heard everything. You go make the decision, because that’s how it works here in this country. But instead, I’m going to carry the water, one, for the banking industry, because they’re involved in this too-

Mike Papantonio: He also worked for the banking industry as a lawyer, yeah.

Farron Cousins: He did. They’re the ones who helped launder the money in the slush fund, so you can’t tell if it was Chevron’s money. Maybe it was a different bank’s money, but it’s all corporate money, and it’s all funding terrorism.

Mike Papantonio: It’s a double whammy. This Donato, this Judge Donato, worked both for the banking industry, as you point out, that also laundered money for the terrorists, and he’s saying, “Oh, gee whiz, you can’t do this, because if you do, it could have ramifications on how the Saudis are taught, or treated, as a foreign national.” His decision here is deplorable.