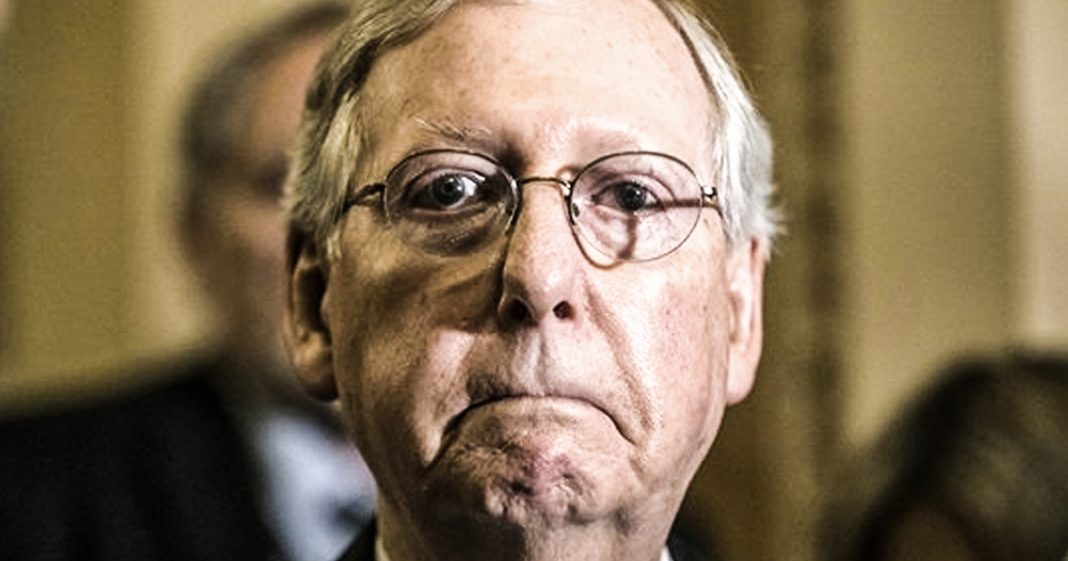 During a press conference this past weekend, Senate Majority Leader Mitch McConnell told reporters that the anger over Brett Kavanaugh will subside before the midterm elections because “these things always blow over.” He’s not entirely wrong in his analysis, and that’s why it is up to the voters to remember this anger and pain that they are feeling today. Ring of Fire’s Farron Cousins discusses this.

This past Saturday, after the Senate voted to confirm Brett Kavanaugh to the US Supreme Court, Mitch McConnell met with some members of the press outside his office. And he didn’t seem too concerned about the overwhelming public anger about the confirmation of Kavanaugh. In fact, McConnell actually told reporters that, “These things always blow over.” They were specifically asking if he thought there was gonna be any kind of blow back for the Republican’s in the midterms because of the whole charade that they pulled off with this phony FBI investigation, the ramming through of Kavanaugh, and the anger that we’re seeing in DC, and all over the country. No, McConnell doesn’t think so! He thinks it’s all just gonna blow over, everybody’s gonna forget. I mean, Kavanaugh who, right? That’s what they’re gonna be saying in a couple weeks.

And here’s the sad part: normally, Mitch McConnell would be correct. You know, it’s been very easy, in the age of Donald Trump, to forget about all of the past outrages. I mean two weeks ago we were all certain that he was about to fire Rob Rosenstein, and therefore replace him with somebody who was more of a puppet, possibly interfere with the Mueller investigation, and all of that. I mean, we’ve all kind of forgotten that that happened. A week ago, we got a major report from the New York Times, that’s actually sparked a new tax investigation into the Trump family, about the tax fraud, and all the tax schemes pulled off by both Fred and Donald Trump. Everybody kind of forgot about that already as well! And I would say, under normal circumstances, yes, people probably would forget about this outrage over Brett Kavanaugh even though it was pretty massive. But I don’t think that’s the case this time.

You know who’s gonna forget about it? Republicans. They weren’t angry about the confirmation, they were happy. So know they’re complacent. Now they get to take their little happiness, their little bit of joy of destroying the reputation of the highest court in the land, and they get to relax. Democrats don’t have that luxury. Democrats are gonna stay pissed off, because we’ve only got four weeks before the midterms, and we’re not gonna forget about all of the insanity that’s happened in just the last week.

Yeah, there’s a lot of outrages out there. And it makes it hard to keep track sometimes. But at the end of the day we remember that this is a wholly corrupt administration, being aided and abetted by a wholly corrupt Republican party. And they’re now corrupting other branches of the government as well. The Democrats, the Independents, the overwhelming majority of people in this country, who did not want Brett Kavanaugh on that Supreme Court, are not going to quickly forget this. And no, Mitch McConnell, it’s not going to blow over before the midterms.