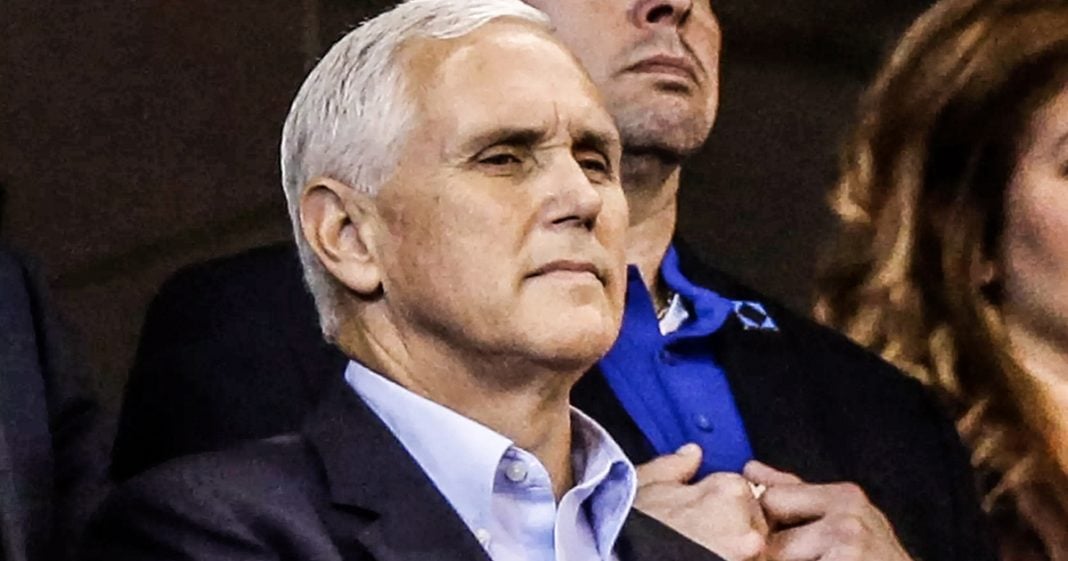 According to new reports, the total receipt for Mike Pence’s pathetic NFL game walkout last year cost taxpayers $325,000. This includes travel aboard Air Force Two, hotels, meals, and tickets. But the report also tells us even more about the trip – it was likely a staged publicity stunt designed to bolster Trump’s attacks on the NFL. Ring of Fire’s Farron Cousins discusses this.

It’s been one year since Mike Pence decided he wanted to take in an NFL football game and go see the Indianapolis Colts play at home, and he specifically went to that game because he wanted to see them retire Peyton Manning’s jersey during half-time. Well, as most of us remember, Mike Pence left immediately after the national anthem because there were players kneeling and he just wasn’t going to tolerate that level of disrespect and blah, blah, blah, blah, blah, blah, blah. Well, that little stunt, according to the latest numbers, cost American taxpayers $325,000. To make matters worse, based on all of the available evidence, it’s very likely that this entire stunt was completely staged by the White House.

If you’ll recall, this was pretty much during the heat of the Donald Trump attacking the NFL and NFL players at every given opportunity. Fox News was hammering on it every single day. Mike Pence wanted in on the action. They wanted to have him make a stand by walking out.

This entire stunt was staged by the White House and it cost us, the American taxpayers, $325,000. Now, the reason, and The LA Times points this out in the new report, you could find the link in the description of this video, the reason they say that this event was likely staged was because the receipts and all the documents related to the trip were too hastily put together and too close to the date of the actual game that it had to have been a last minute publicity stunt, a last minute idea, by this administration to have Pence go to this game in Indianapolis. They knew it was going to be a highly watched game because they were retiring Peyton Manning’s jersey. Mike Pence is the former governor of Indiana. It made sense for him to go to the Colts game. Everything aligned perfectly for them and that’s why they chose this game.

Donald Trump even after Pence walked out of the game, he tweeted out the following. He said, “I asked @VP Pence to leave stadium if any players kneeled, disrespecting our country. I am proud of him and @SecondLady Karen.” Trump admitted in a tweet after the game that they had already talked about this and that if there’s anybody kneeling, you got to walk out of that game.

This whole thing was staged and it cost us, the American taxpayers, $325,000. At the same time, it showed that this administration has no idea whatsoever as to why those NFL players are actually kneeling. It has nothing to do with the flag, it has nothing to do with the anthem. It has everything to do with unprovoked police violence against minorities in the United States. But Pence and Trump needed an easy win, and they thought sending that idiot to that NFL game was going to be an easy win for them. Well, now that we know the price tag and how much their little publicity stunt cost, I’m wondering if they still think they should count that as a win.