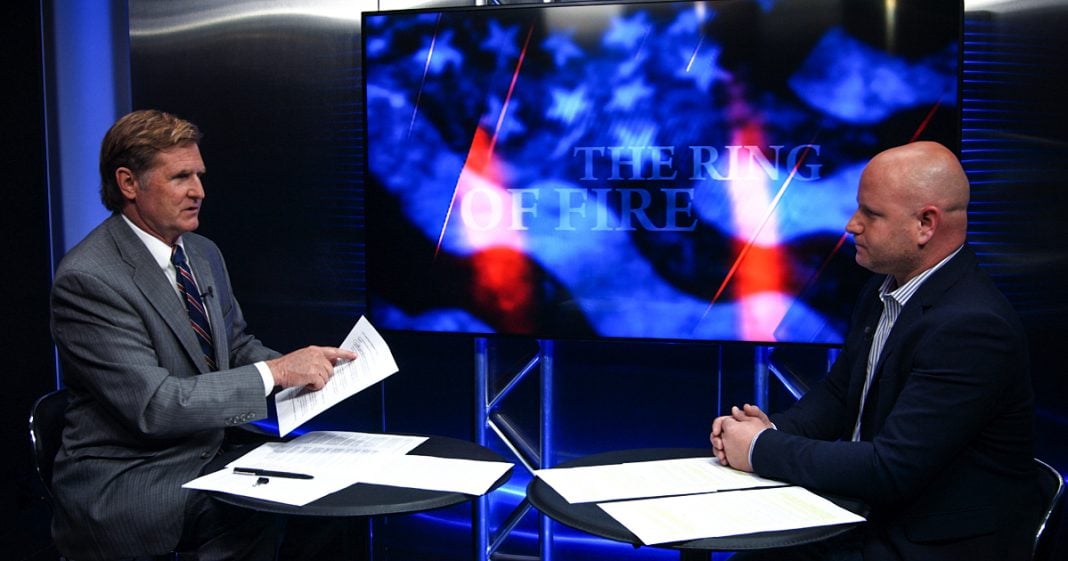 More lawsuits are being filed against the makers of metal-on-metal hip implants after complaints emerged of metal poisoning from the devices. Ring of Fire’s Mike Papantonio and Farron Cousins discuss this issue.

Mike Papantonio: More lawsuits are being filed against the makers of metal-on-metal hip implants after complaints emerged of metal poisoning from the devices. Now, full disclosure, as you know, we handled the first set of DePuy cases that came out. We were actually involved in the leadership to discovery in that case. We settled that first round of cases.

But what we learned was startling, actually. What we learned was that there’s cobalt … When you rub metal on metal in the human body, synergistically, you create chemicals. There’s already cobalt in the metal, but synergistically, those chemicals are very toxic and they move through your … They move systemically through every organ system. It’s no difference than a heavy metal poisoning. To some degree, this is even worse. We found neurological diseases because as you might imagine, it affects the neurological system. You found issues with heart. If you just go look at the classic symptoms of heavy metal poisoning, you’d find all of them here. In the documents, the first go around on the documents, it was very evident they knew about it, they talked about it, they had doctors saying, “Hey, I have these people that are presenting with classic symptoms of metal poisoning.” When they would open the patient up, the area around the implants sometimes was necrotic. The damage was set, so it actually damaged the tissue all around the joint, the hip joint. That’s a massive joint. The necrosis was a huge problem obviously for the tissue around.

What’s your take on this story?

Farron Cousins: Well, you know, these hip implants, these DePuy ASRs, they’d actually been voluntarily recalled many years ago. A lot of patients obviously the thought of having to undergo another major hip surgery, you know, you’re out of commission for months, really, especially consider. Some of them were not able to do it. They understood the risks and they weren’t able. But now they’re also developing the problems. It’s the cobalt…

Mike Papantonio: In other words, you’re saying it was too early for them to do it back then.

Farron Cousins: Right. Right. So, they didn’t. They had just come off it. It’s really hard for them to do this. You talked about that case. We’ve got this one here that’s a continuation of that. DePuy has kind of been one of the repeat offenders here. That’s a subsidiary of Johnson & Johnson. We’ve seen it with a lot of their products. Not all of them, but a lot. You almost kind of get the sense-

Mike Papantonio: When you see Johnson & Johnson product, it sounds like a real overstatement but it’s not, these cases, I’ve handled 35 years, just nothing but pharmaceutical cases, medical device cases, but there’s kind of a joke in the industry. When you see J&J involved with a lawsuit and somebody’s saying there’s a problem, most of the time there is. Of course, now, it’s just not pharmaceuticals. It’s devices, it’s talc, and my god it goes on forever the problems that this company’s having. I don’t know how they’re going to weather all of this, to be honest with you. But this is a real case and people now, because there’s a latency, the implant’s put in, you want to hope for the best. A lot of these people said, “Well, I want to hope for the best.” To go in and say, “I want this removed and replaced,” I mean, that is a major, major surgery. The older people become … I mean, one of the classic kind of ways that people at the end of their lives, it’s typically centered around a broken hip. It’s a major kind of surgery. It’s not like, “I want to just go in and remove this DePuy.” It’s not that easy, is it?

Farron Cousins: No. Because a lot of these people, and this is why they did not do it at the time, either it was too soon after they had just had it put in or their bodies are no longer in the condition to where they could survive any kind of surgery at all, so they’re stuck with it. They didn’t necessarily make the choice for this. The doctor told them this is what’s best for you. I trust my doctor. I will go through with what you say. But now, I’ve had it five years. We find out it’s bad, but I have late stage cancer now. I can’t go through this. I have chronic pneumonia. I couldn’t survive going under for this surgery.

Mike Papantonio: Yeah. This is an ugly story in a lot of ways, too, because this is another deal where Johnson & Johnson, DePuy, went out and found these opinion leaders, these doctors, that would stand … You know, well respected Orthopods that would write, “I’m a believer in this product,” and they actually traveled around, making, giving speeches about what a great revolutionary product this was. All the time that was happening, all the time that Johnson & Johnson had them out doing that, the full time, in DePuy, in Johnson & Johnson’s own file cabinets, there was discussion about how dangerous this could be because of metallosis. Metallosis relating, of course, to-

Farron Cousins: Right. From just the natural joint itself rubbing against each other.

Farron Cousins: The cobalt and chromium.

Mike Papantonio: Yeah. We’ve got a couple of minutes here. Let’s do this.

CBS is facing shareholder lawsuits after the network tried to cover up many, many sexual assault allegations against former chairman and CEO, Moonves. But it wasn’t just Les.

Farron Cousins: Right. It was a lot of them.

Mike Papantonio: It was not just Les that was involved in this. There was a culture there at CBS. It just seemed to pervade all of these major networks that I suppose they think they’re above it all. They’re making a gazillion dollars a year. They’re running a big network. These sexual predator allegations are outrageous. But one quick way to get to it is to have the shareholders say, “You know, you covered this up. And because you covered it up, now it’s going to cost me, as a shareholder, a lot of money. It’s kind of like musical chairs. When this was going on, I didn’t own your stock. Now I do own your stock and everybody’s … You know, it’s come full circle. I’m going to have to pay for all your ignorance, your predatory stupidity. I got to pay for that.” This is a lawsuit CBS better worry about.

Farron Cousins: Right. Absolutely. This affects people who bought stock in the company I think from 2014 to 2018. We’re talking about four years worth of people buying into this stock while this company was covering up for Moonves, for Charlie Rose, for Fager, so many people. We talk a lot about the stuff that happened at Fox News with all those folks. CBS doing the same thing, not getting near as much coverage.

Mike Papantonio: CBS reporting on the Fox News story every night. How horrible. How this is terrible. Old Les is out there like predator extraordinaire, bumping into women all over the set.

Farron Cousins: And gets a golden parachute of well over $100 million for what he did here.

Mike Papantonio: $100 million. Yeah. Thanks, Les. Shareholders need to get that money back.